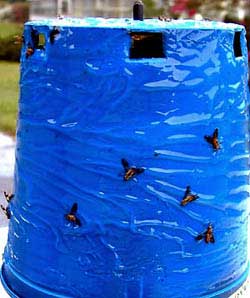 Recently, I’ve been asked about a deer fly trapping method that I wrote about a number of years ago. So, here it is. This aggravating insect is active now.

Deer flies, which are in the horsefly family, are annoying as they repeatedly and persistently dive for their victims until they inflict a painful bite.

Dr. Russ Mizell, now retired UF/IFAS Extension entomologist, experimented with a method to trap this insect. Mizell wanted to identify the optimum shape, size, color and speed to attract deer flies. If successful, he could temporarily remove a deer fly population long enough to enjoy an outdoor gathering without being bothered by deer flies.

Mizell said he started the research as a high school science project with his son but “it got so interesting, I just kept doing it.”

Deer flies wait for prey to walk before attacking. So, they are highly attracted to movement.

With this in mind, Mizell and his son decided the best way to snare deer flies was to “troll” for them from a slow-moving vehicle. Working in spring and summer when deer flies are most prominent, they set out to discover what kind of trap worked best.

They built a test platform on the hood of their vehicle that could troll seven different shapes at once. They ambled along in deer fly-infested countryside for set periods of one to five minutes, testing pyramids, squares, balloons, plant containers and other shapes, all coated with Tanglefoot (commercially available sticky spray for insects), then counting immobilized prey. They tried black, tan, blue and shapes of other colors suspended from various heights.

The trap that enticed the most deer flies proved to be a 6-inch flowerpot painted bright blue and coated with Tanglefoot. This trap captured as many as 30 deer flies in a one-minute test. It worked best when suspended three to six feet above the ground and trolled no faster than 10 feet per second or about 7 miles per hour.

The traps are remarkably effective, Mizell said. “Many times, after running the traps through an area, we found there were no deer flies left,” he said. “You trap them out for a short period until they repopulate the area.”

The traps also work when attached to a baseball cap and trolled by the hat’s wearer. But instead of attaching a flowerpot to your cap, you could attach a blue drink cup painted with Tanglefoot.

Despite its effectiveness, its aesthetic appeal leaves something to be desired.

For more information including instructions and pictures of how to make a deer fly trap visit the below site. http://entomology.ifas.ufl.edu/pestalert/deerfly.htm