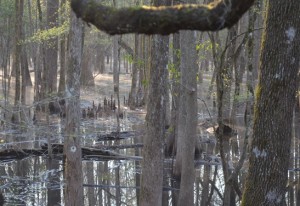 Recent rains have left water standing on some panhandle Florida real estate which has been dry for several years.  Ponds, natural and dug, are brimming with water reflecting the generous outpouring from the slow and wet weather system which passed listlessly over the area.

The rainwater excess is also filling the natural low points known as swamps or wetlands.

A swamp is defined as a forested wetland. Some occur along the floodplain of rivers, where they are dependent upon surplus flow from upstream and local runoff.

Other swamps appear adjacent to ponds in shallow depressions which fill during wet periods.  Their landscape is covered by aquatic vegetation or trees and plants which tolerate periodical inundation.

Historically, swamps have an image problem.  Legend has all sorts of unsavory creatures, degenerates, and ghosts inhabiting the locale waiting for the unsuspecting traveler.

Even the proper British used the term as a pejorative to describe Francis Marion during the American Revolution.  The Swamp Fox engaged in guerilla warfare against the conventional forces and hid in the swamps to avoid capture.

Economically, these watery regions have had very low values.  Their only significance was as site for trapping, hunting or for logging in dry years.

Medically, swamps were seen as a quick and painful way to the grave.  There were all those creatures which could inflict pain; leeches, snakes, gators and the like.

Then there was disease.  As an example, the term Malaria originated from the swamps of southern Europe where it meant bad air in medieval Italian.  The mosquito connection was unknown until the early 20th Century.

Hollywood piled on the problem with a series of swamp monster movies.  One, “The Creature from the Black Lagoon” was partially filmed at Wakulla Springs in the panhandle.

Reality, as is often the case, is quite different than the initial perception. Even the term swamp has fallen out of favor in some circles, being replaced with wetlands.

Swamps or wetlands serve a variety of functions in north Florida.  Possibly the most critical is as a filtration system for the water table.

Excess rain is held in these shallow depressions and allowed to percolate or filter slowly through the soil.  The screening effect of the soil and subsoil layers along with the slow progression cleanses the water of numerous impurities from the surface.

Without the holding capacity of local swamp, most rainwater would end up in streams and rivers.  In addition to being a loss for the water table, the excess water would cloud waterways with a glut of surface debris and nutrients.

It is true mosquitos favor the still swamp waters, but so do many birds, fish and animals.  Swamp rookeries are the nesting home for many wading birds. Mosquito larvae are an important link in the food chain which supports much of the life in the swamp, and beyond.

Even some of the swamp’s most ostracized residents, snakes, have an important part to play in the overall environmental balance.  These reptiles control the population of many destructive insects and rodents.

To learn more about the importance of Panhandle Florida’s swamps and wetland, contact your UF/IFAS Extension Office.