Silent Night It Is Not!!! Cicadas Sing the Evening Away. 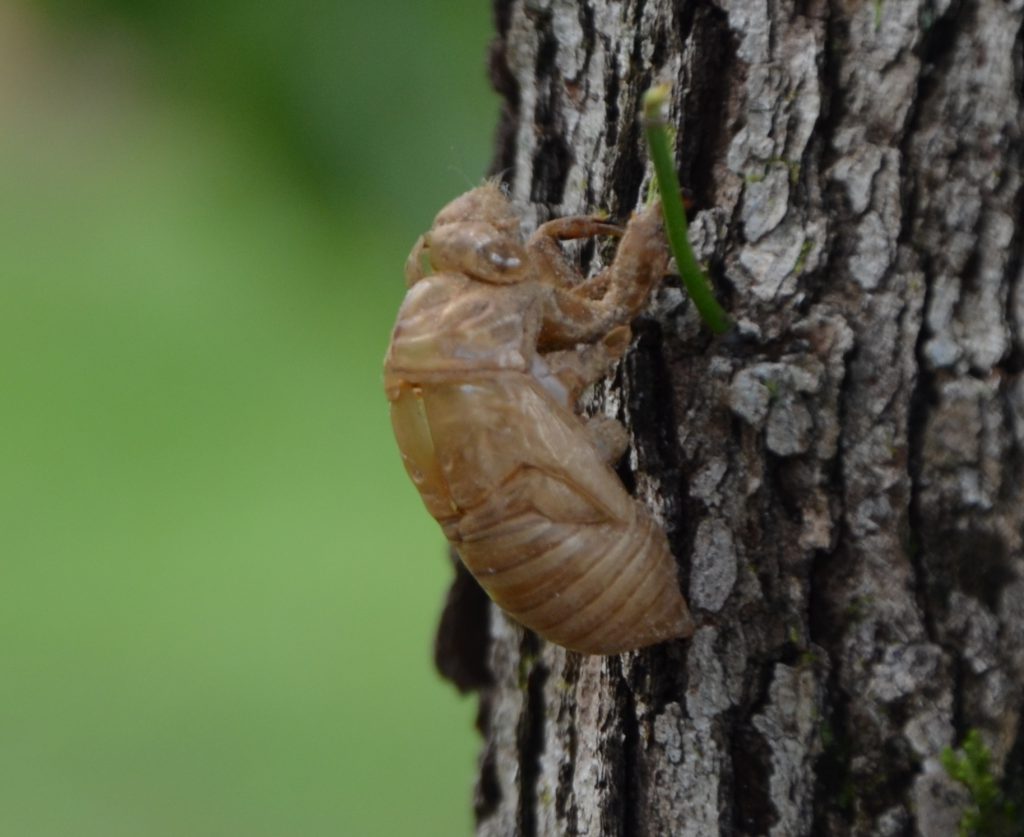 Only a shell of its former self, the exoskeleton shed by a cicada is all that remains of the previous night’s long pursuits.

Autumn evenings in the panhandle are usually beginning to reflect the official change of seasons with cooler air and a slight lessening of the raucous din created by insects and birds. The recent early-fall hurricanes have brought the area a wide breath of hot, humid air, delaying the long anticipated start of relief from the sultry summer environment.

Anyone hearty enough to take an early evening walk in north Florida will experience a continuation of the frenetic activity and riotous sounds typical to summer in the south. The near deafening call of cicadas (Magicicada spp.) is part of the cacophony.

Once commonly identified as locust in the region, their near-mechanical buzzing originates from the protection of foliage in trees and bushes during the day or twilight hours. During the dark hours they sing often and relocate frequently.

It is important to note cicadas are not the locust of infamy which shred the green, lush landscapes and foretells famine. While locust and cicadas are both insects, the similarities end there.

These seldom seen or captured insects known for their boisterous, sometimes undulating, chorus do leave strategically placed souvenirs for the sharp-eyed observer. This discarded residue of their early life stages is a highly valued tool for many elementary school boys with a prank in mind. The hard shell is harmless, but under the right conditions does have a certain shock value appreciated by juvenile miscreants.

Their nymph stage skeletons are often seen on the trunks of trees, shrubs stalks and even the siding of buildings. The opaque brown shells are abandoned when the cicada outgrows it and then emerges to form a new exterior.

The process is similar in other insect species with an exoskeleton having very limited potential for growth and expansion. The rigid coating provides this creature an armored surface to fend off the challenges of being small and small in a big hungry world.

In some states, cicadas are famous for their periodic appearance in colossal numbers, sometimes as many as 1.5 million per acre. These once every 13 to 17 year swarms do not occur in Florida which has an insect friendly environment.

The 19 Florida cicada species fall into three groups based on overall size measured by the length of the forewings. They produce their songs with timbals, paired drum-like structures on the sides of the abdominal segments.

A muscle attached to the timbal plate causes the timbal ribs to pop inward and project outward when relaxed. Flexed rapidly, the cicada chorus can deliver hours of uninterrupted night music.

In Florida, only males have timbals and the females are mute. Most sounds made by males are calling songs which serve to attract the silent females.

Cicada nymphs live in underground burrows where they feed on xylem sap from roots of grasses or woody plants. Because xylem sap is low in nutrients, complete nymph development takes several years to successfully mature.

All cicada species molt four times underground. When the cicada nymph is ready for its fifth and final molt it makes its way to the soil’s surface. It climbs a short distance up a tree trunk or stem, anchors itself and molts for the last time becoming an adult.

If male, the new cicada will add its contribution to the nightly festivities. If female, she will quietly wait for that special, one in a million, nocturnal crooner.