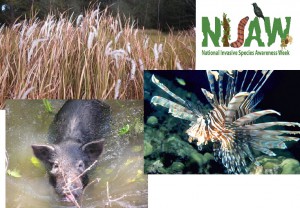 Many plants and animals have been introduced to new regions for centuries, as people have discovered new lands.  These transient species are known as non-natives, and can become invasive. Invasive species occur throughout the world and may blend in, be nondescript or highly attractive; they can be plant or animal; terrestrial or aquatic; they may resemble or remind the viewer of something familiar; they may be very good at adapting to our climate and conditions which is how many invasive species get their foothold in an area.  And because they have not evolved alongside our native species, when introduced to areas lacking their natural predators, they can adapt and take off.

Conditions in the SE US are ripe for many invasive contenders.  Some species have been intentionally introduced and other species have been accidentally introduced. Some common invasive species include red imported fire ants, Kudzu, Privet, Chinese tallow, Japanese climbing fern, Chinaberry, and cogongrass, just to name a few on the tip of the iceberg.  These species are now out-of-control, and it is unlikely they will ever be eradicated from their new home.

In 2011 alone, the Department of the Interior spent more than $100 million on invasive species prevention, early detection and rapid response, control and management, research, outreach, international cooperation and habitat restoration in the US. (USFWS) This is a drop in the bucket when you consider in FY 1999-2000, nine Florida agencies spent $90.8 million on prevention, monitoring, control, and restoration efforts.  It is estimated that the annual cost of invasive plants, animals and diseases in losses to Florida’s agriculture is estimated at $179 million annually (www.defenders.org).

Much like a cancer can spread in the body, so too, when conditions are favorable can invasive species spread across the landscape.  Once established in the landscape eradication is expensive; ideally early monitoring is critical to understanding its movement and dispersal, coverage, and containment. Like cancers, early detection provides better opportunity to address the situation.  Within the landscape, an aggressive invasive can impact the entire ecosystem – causing a serious imbalance; followed by a cascade of impact via unforeseen collateral damage.

Take the newest aquatic threat of Lionfish.  The trophic impacts of lionfish could alter the structure of native reef fish communities and potentially hamper stock rebuilding efforts of the Snapper –Grouper Complex. Additional effects of the lionfish invasion are far-reaching and could increase coral reef ecosystem stress, threaten human health, and ultimately impact the marine aquarium industry. Control strategies for lionfish are needed to mitigate impacts.

Disturbances like new roads, land clearing, and tropical weather events (hurricanes) can all provide the opportunity for invasive species to get a foothold.  So, the next time you notice a plant or animal that you don’t recognize, take a picture and report it using the “I’ve Got One!” phone app or on-line to The Early Detection & Distribution Mapping System (EDDMapS.org). You can also report to  the nearest Extension Agent.

A good way to learn how to identify and control some of our common invasives is to join a volunteer workday at a park near you sponsored by the Six Rivers Cooperative Invasive Species Management Area (CISMA) or the Florida Native Plant Society.