Invasive Species of the Day: Tiger Prawn and Climbing Ferns

Giant Tiger Prawn: This large shrimp, also known as the Asian Tiger Shrimp and the Black Tiger Shrimp, can reach lengths between 8-12 inches.  It resembles are native edible penaeid shrimp but differs in that it has distinct black and yellow stripes. It was brought to the U.S. from the Indo-Pacific region as an aquaculture product.  There was an accidental release of 2,000 animals from a South Carolina farm in 1988. 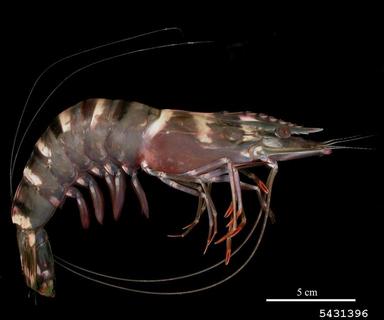 Reports of this shrimp in the wild have increased over time.  They have been found in all Gulf coast states and there has been at least 1 record in each of the Florida Panhandle counties.

The impact of this shrimp to our area is still unknown but they have a high tolerance for salinity change and consume many types of benthic invertebrates.  It is thought that they could become serious competition for our native penaeid shrimp and could possible transmit diseases.

If you think you have found one of these shrimp, record size location (GPS preferred), and email information to ExoticReports@MyFWC.com.  To learn more about this species view the USGS factsheet.

Japanese Climbing Fern (Lygodium japonicum) and Old World Climbing Ferns (Lygodium microphyllum): are presently the only non-native invasive ferns in Florida.  Both ferns reproduce and spread readily by wind-blown spores. A single fertile leaflet can produce 28,600 spores.  Animals, equipment, and even people that move through an area with climbing ferns are very likely to pick up spores and move them to other locations on the property or even to other properties. 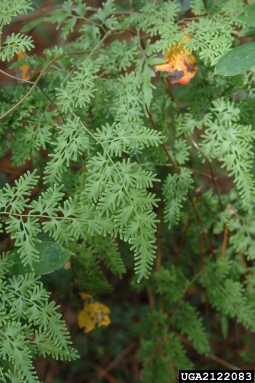 Japanese climbing fern is a delicate looking perennial climbing vine.  It is capable of forming a dense mat-like thatch capable of covering trees and shrubs. Initially, it was introduced from Japan as an ornamental. It is scattered throughout the lower portions of Alabama, Georgia, Louisiana, South Carolina, and south into central Florida. Further planting or cultivation of this vine is prohibited by the Florida Department of Agriculture and Consumer Services.  It climbs very quickly to the crowns of pine trees, which can move fire into the growth points during controlled burns, making it a concern on forested lands.

Old World climbing fern has been a problem for many years in central and south Florida but it is currently moving north. The first plant was documented in 1958 by a nursery in Delray Beach.  By 1965, it was found in natural areas of Marion County.  The northern edge of its advance by 2012 was Hernando County on the Gulf side and Duval County on the Atlantic coast.

Adequate control of both climbing ferns has been achieved with multiple applications of glyphosate and/or metsulfuron. Other herbicides, such as triclopyr and imazapic have also been used to
control Japanese climbing fern.  However, when the plant is growing in areas adjacent to wetlands or water, fewer herbicides are registered for those sites.  Hand digging is also an option, except when the fern is producing spore covered leaflets.  Disturbing it then would propagate more plants. 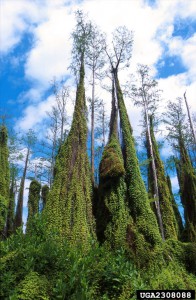