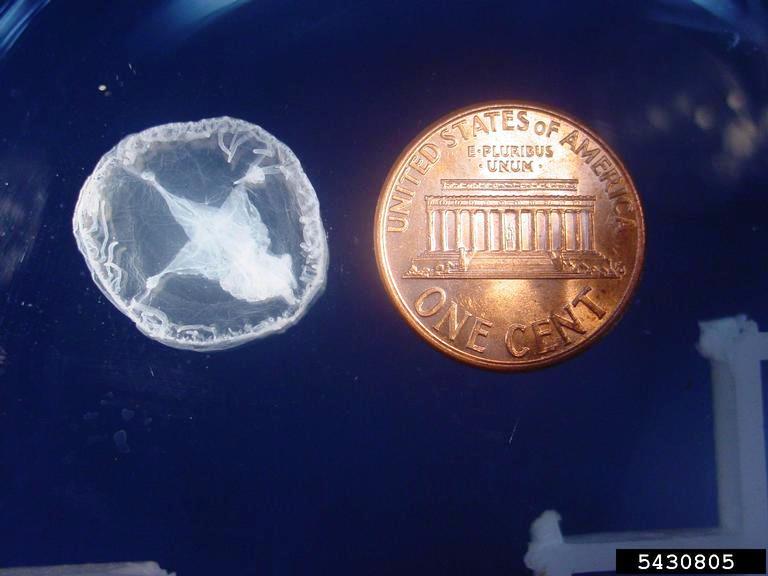 Yes, you read the title correctly, it says freshwater jellyfish in Florida! The first time I encountered these unusual aquatic creatures was while swimming in a small lake in southern Indiana. It turns out these jellyfish, while not very common, have been found in almost every state in the U.S. This jellyfish is known as a hydrozoan, a tiny aquatic invertebrate animal. It grows into a few different forms during its life-cycle and is most easily identified when it takes the form of the small jellyfish. This form during its life-cycle is known as a hydromedusa and measures up to about 25 mm in diameter, which is a little larger than a penny.

The scientific name for this unusual organism is Craspedacusta sowerbyi and it is native to the Yangtze River valley in China. It was first described to science in 1880 from specimens collected in water lily tanks in London. This freshwater jelly is now common in temperate climates almost worldwide, and was most likely introduced into the US attached to ornamental aquatic plants and fish.

Hydromedusae, the form that looks like a jellyfish, are produced only sporadically from their otherwise immobile attached form known as a polyp on lake and river bottoms. Sightings of the jellyfish are most common in summer and fall but may go several years between occurrences. The freshwater jellyfish mainly eats tiny aquatic zooplankton, catching them with their stinging tentacles. They are not considered dangerous to humans.

The impact this non-native freshwater jellyfish may have on aquatic ecosystems is not well known. Sightings of this organism are being recorded by the U.S. Geological Survey Nonindigenous Aquatic Species Information Resource and EDDMapS (a web-based mapping system for documenting invasive species distribution, launched by the Center for Invasive Species and Ecosystem Health.)

So, while you’re enjoying your favorite freshwater swimming hole this summer, keep a sharp eye out for these harmless, fascinating, yet non-native, jellyfish! If you find them, report your sightings here at EDDMaps.

Information from the following resources were used to write this article: