A Look at Some of Our Colorful and Intriguing Native Bees

Bumble bees and other pollinators often visit the vast fields of cotton flowers in north Florida’s agricultural lands. Although cotton is mainly self-pollinating, pollination by bees can increase seed-set per cotton boll. Note the pollen grains stuck on each bee. Photo by Judy Biss

Beekeeping is thriving in Panhandle Florida and the importance of honeybee health and pollination is frequently in the news.  As much as 1/3 of our food supply depends on the pollinating activities of honeybees, and because of this fact, pollinator protection was formally recognized at the federal level in 2014 when the President of the United States signed the memorandum called: Creating a Federal Strategy to Promote the Health of Honey Bees and Other Pollinators.

The goals of this policy are to increase and improve pollinator habitat for not only managed European honeybee colonies, but also native bees, birds, bats, and butterflies – all of which are vital to our nation’s economy, food production, and environmental health.

So, of the variety of pollinating insects and animals, what are some of Florida’s native pollinating bees?  What do they look like and what are their characteristics?  Let’s take a look at a few.  Follow the links provided for additional, fascinating details.  I will start with one of my favorites, because it happens to pollinate one of my favorite fruits.  Blueberries! 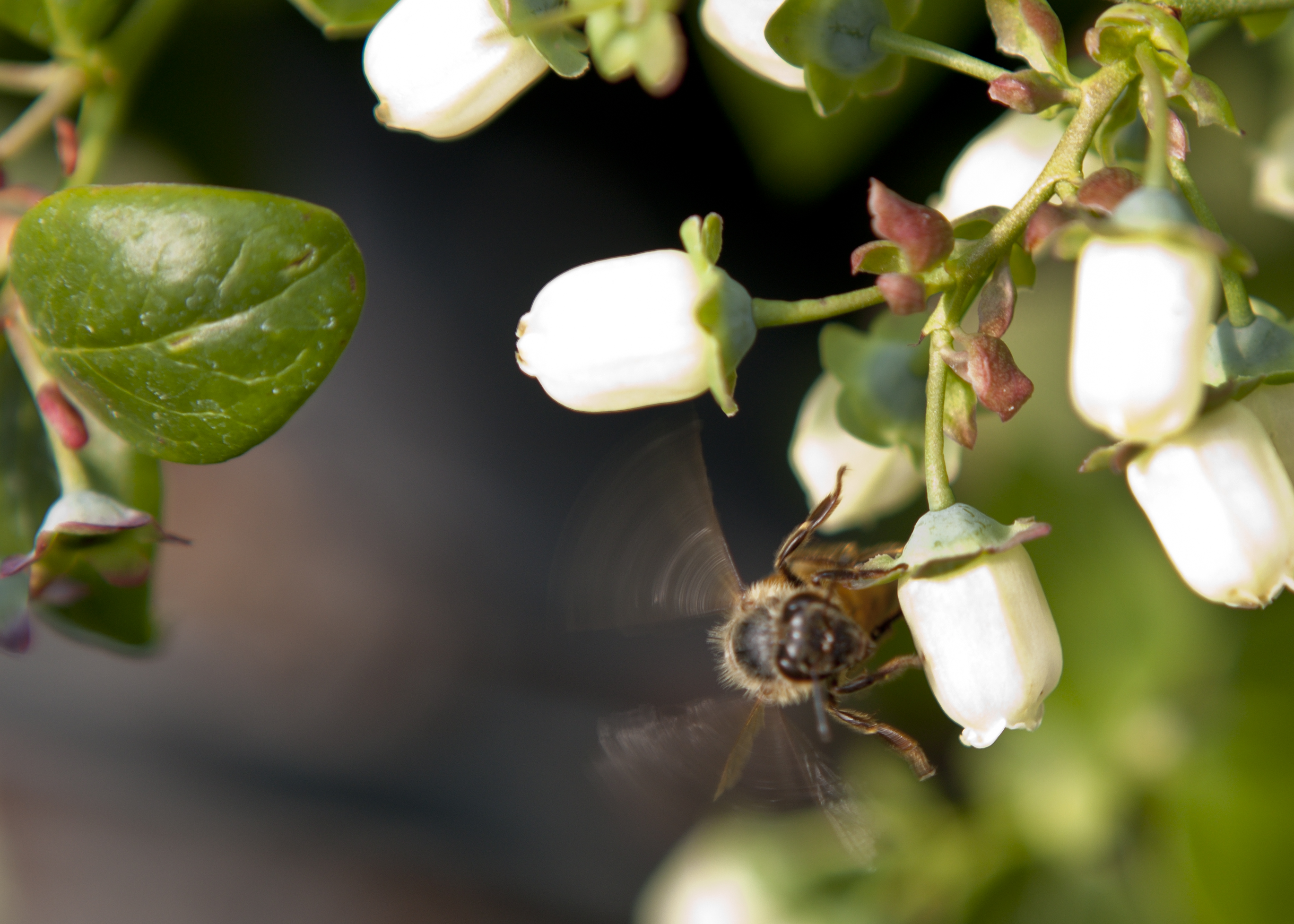 While managed honeybees can pollinate blueberries, the Southeastern blueberry bee, as well as bumblebees, are much more efficient pollinators of this crop.  These bees “sonicate” the flowers to release more pollen.  Sonication, or buzz pollination is caused by the bee’s high-speed wing beats vibrating the flower causing pollen to fall onto the bee.  As we will see with many of our native bees, the Southeastern Blueberry bee is a solitary bee meaning it does not live in colonies like the European honeybee.  The Southeastern Blueberry bee digs burrows in the ground where they lay eggs that hatch the following year to start the cycle over again. 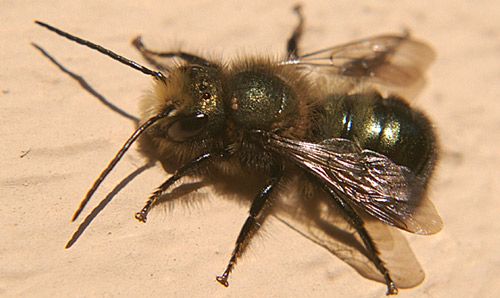 Blue orchard bees are native to the United States and Canada, and are important pollinators of a variety of fruits including blueberries.  They are solitary bees most active in the early spring and summer.  They are part of a group of bees called mason bees that use holes or tube-like structures to nest in.  Some garden supply stores now carry native bee nesting cavities such as stacks of bamboo or blocks of wood with holes of varying sizes that you can use to attract these native pollinators to your backyard. 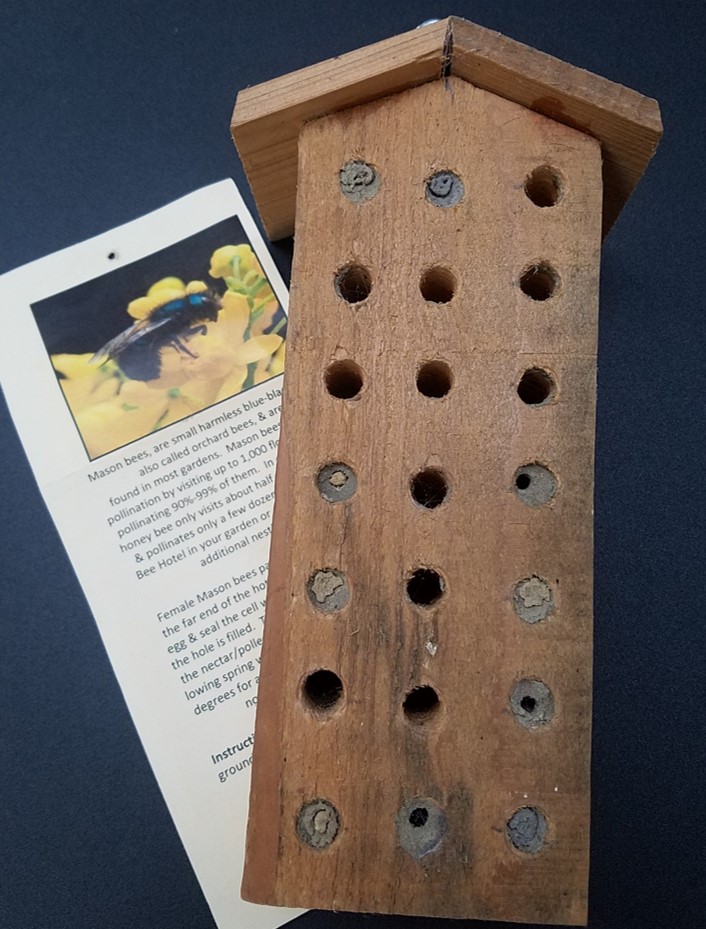 Many native pollinating bees, such as the mason bees, are solitary in nature and can be attracted to your backyard by providing nesting habitat. Bee nesting “houses,” such as this block of wood with pre-drilled holes, are available for sale more frequently now in garden supply stores. Note the cavities that were used indicated by the mud-like plugs. Photo by Judy Biss 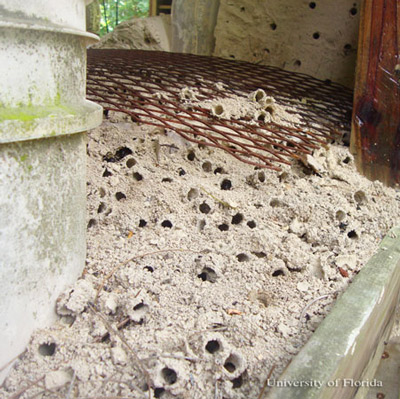 A few years ago, our office received a call about a number of bees flying around a large pile of fill dirt in one of our local parks.  It turned out to be the nesting site of these fascinating bees.  These bees are solitary, yet gregarious.  Solitary in that the female builds her own burrow in the ground in which to lay her egg; gregarious in that they tend to congregate together to build their individual burrows.  They are pollinators of a number of plants, including fruits and vegetables. 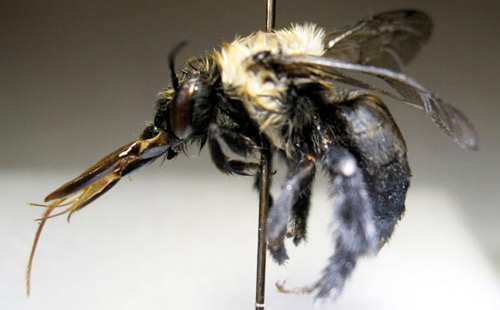 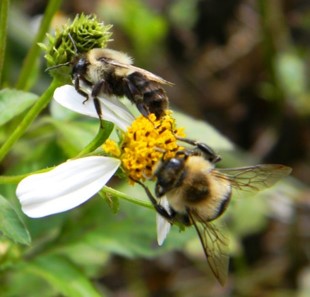 Bumble bees are among the most recognizable of insects. They are large, colorful, and a wonder to watch. They are also important pollinators of both native plants and agricultural crops.  Bumble bees are so effective at pollinating important food crops, they are raised commercially and sold to pollinate produce such as tomatoes, peppers, cranberries, and strawberries.  Blueberries and other commercially important food crops benefit from the bumblebees’ ability to “sonicate,” or “buzz pollinate,” as described above.  They are social bees forming small colonies (50 – 500 individuals) in the ground or empty cavities, which only last one season. 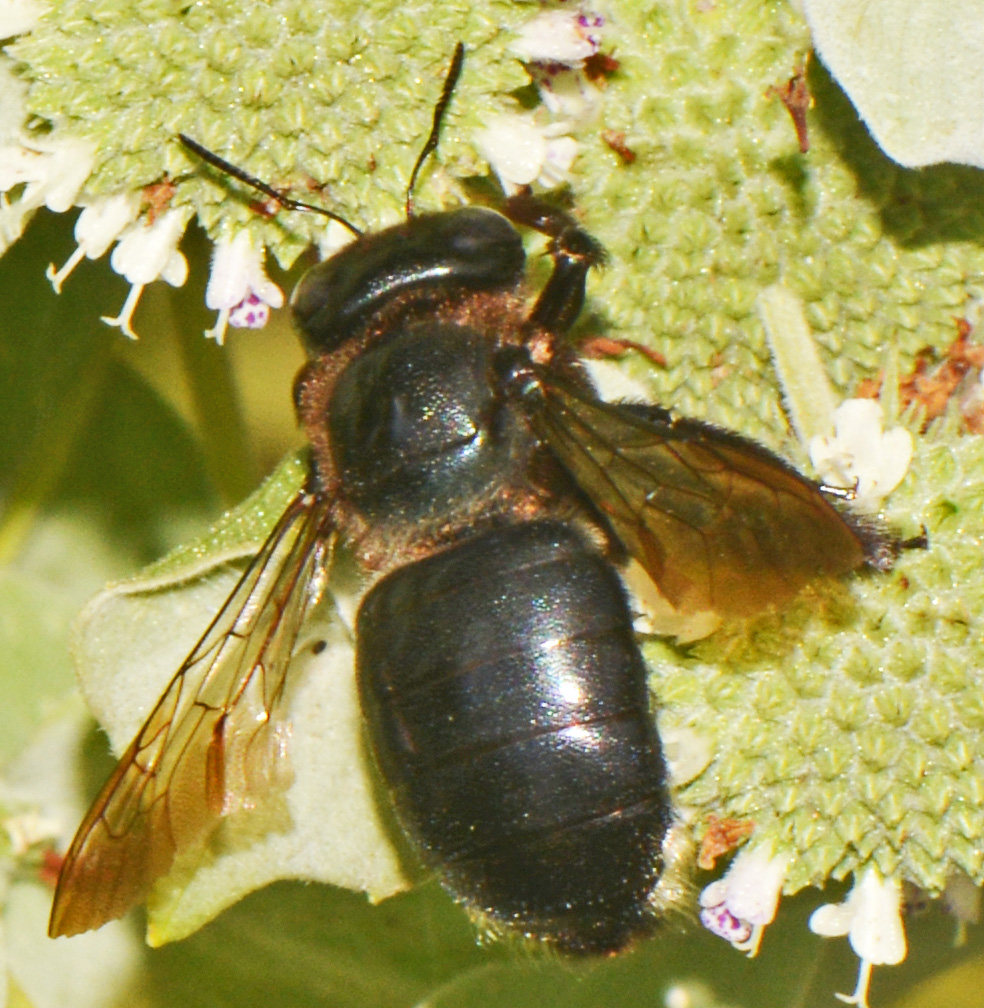 Megachile xylocopoides, Carpenter-mimic, Leaf-cutter Bee, one of the many species in Florida.  Photo by Travis MacClendon. Calhoun County Florida Wasps and Flies

Leafcutting bees are a group of important native pollinators found throughout the world, including North America.  In Florida, there are approximately 63 different species of leafcutting bees, one of which is Osmia lignaria listed above (Blue Orchard Bee).   As the name implies, these solitary bees cut neat circles from broadleaf deciduous plants which they use to build their long tubular nests.  While their leaf cutting capabilities can sometimes decrease the esthetics of some common landscape plants, their actions will not harm the plants.  They are pollinators of wildflowers and many of our fruits and vegetables. 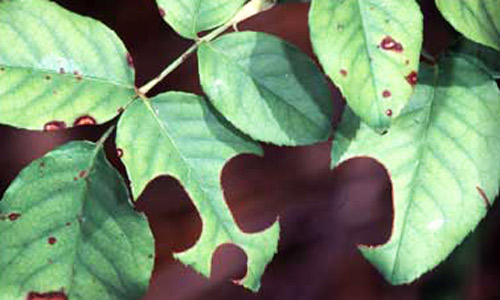 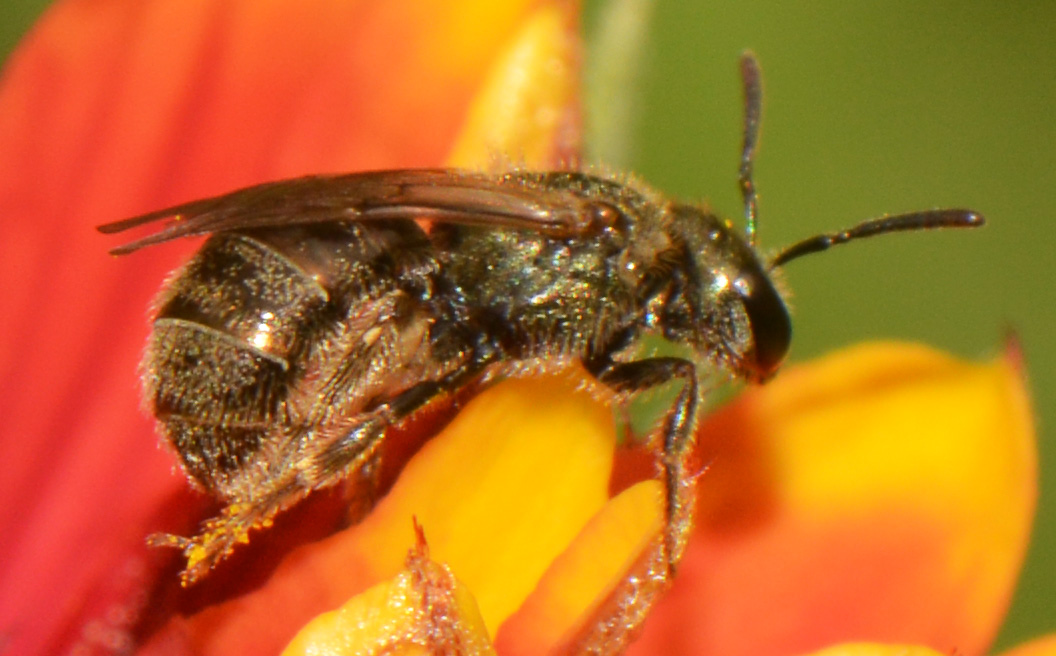 Lasioglossum spp. Sweat Bee, one of the many species found  in Florida. Photo by Travis MacClendon.  Calhoun County Florida Wasps and Flies

Sweat bees are important pollinators for many wildflowers and fruits and vegetables, including peaches, plums, apples, pears, alfalfa and sunflower.  This family of bees (Halictidae) contains one of the largest genera of bees in the world, displaying a wide range of social, nesting, physical, and foraging characteristics.  In Florida, there are 44 species of sweat bees. 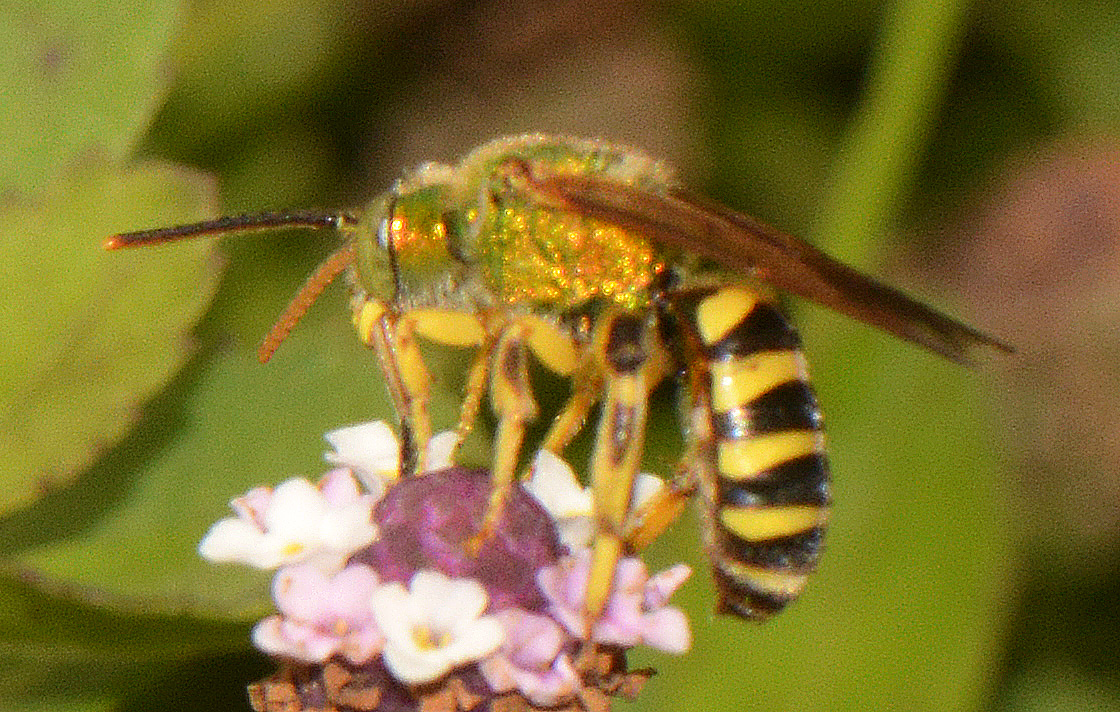 Another striking example of the many species of sweat bees. Photo by Travis MacClendon.  Calhoun County Florida Wasps and Flies

So, the next time you are walking in the garden, or hiking in Florida’s beautiful woodlands and pastures, slow down to catch of glimpse of these busy and critically important insect pollinators.  I for one am quite grateful for those bees that help produce an abundance of food… especially blueberries!

For more information, check out the following resources:

The Bumble Bee – One of Florida’s Vital Pollinators