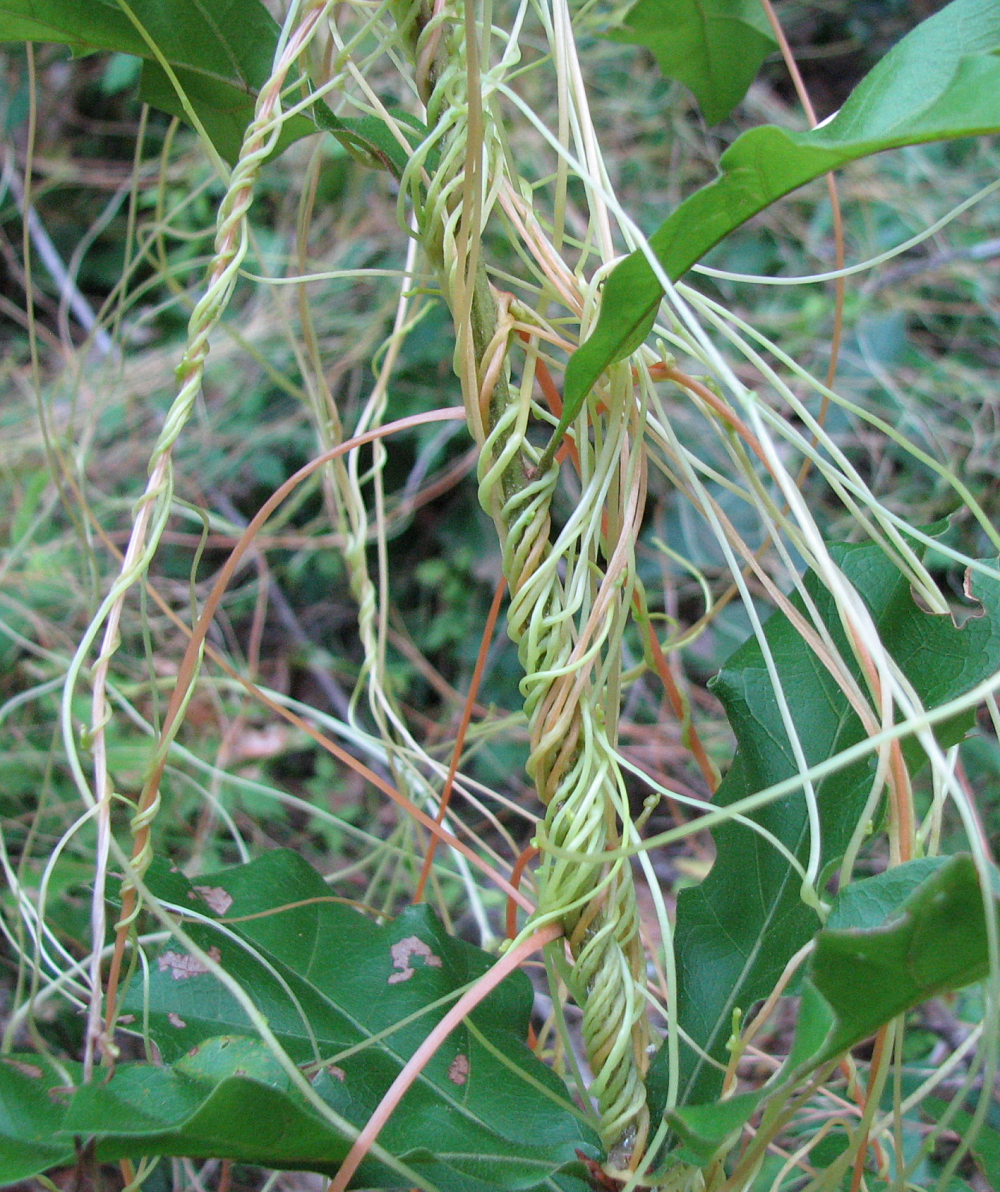 Vampires of all types and genetic modifications are hot topics these days, and a common, but uncommon looking and acting Florida weed may have combined the two subjects. Dodder, a native invasive, parasitic plant, reproduces by seed but does not have enough leaves or chlorophyll to feed itself. Its thin, golden vines and tendrils must attach to a host plant in the seven to ten days it takes the plant to exhaust the carbohydrates in its small seed. Once dodder attaches to a plant, it connects to the inside of the host using small structures called haustoria which press into the stem and begin to draw nutrients from the host. At this point the dodder roots atrophy.

Single dodder plants are not a big issue, but once enough plants build up in an area large mats of vines can reduce growth and vitality of the host. (See photo) Frequently, the pest has reached this stage before it’s noticed, leaving the problem of treating a rootless, nearly leafless plant that is wrapped around a more desirable plant. Not only are the typical routes of herbicidal entry minimized, the hosts are at as much risk as the pest. Hand removal may be practical in small outbreaks, but the plant can reemerge from any small piece left attached to the host. In most cases, the solution is to destroy the host and the dodder and apply a pre-emergent herbicide to stop germination from any seeds remaining in the soil.

What about the GMO angle?

Work published last year in the journal Science by Jim Westwood of Virginia Tech reveals the dodder plant exchanges messenger RNA with tomato and Arabidopsis plants when it extracts the juices from the host plant. Scientists speculate this exchange of genetic material makes the host plant less resistant to attack by the parasite and that this holds promise for learning more about controlling other parasitic plants.

If plants are exchanging messenger RNA, a critical part of protein and gene synthesis, what other genetic exchanges are occurring naturally without our knowledge? Scientific progress hinges on unpredictable events and sources. Learning more from a “vampire weed” that has no easy means of control may be one of those.
To see the dodder plant go from seed to golden mat, watch this time lapse video Virginia Tech has posted on Vimeo. http://www.vtnews.vt.edu/articles/2014/08/081514-cals-talkingplants.html