While directing the Marine Science Academy for the Escambia County School District I had students conduct small, informal, surveys targeting the popularity of seafood with students, parents, and the community. The purpose of these surveys was to kick start a discussion on the commercial fishing issue. The northern Gulf Coast has been known for several popular seafood products over our history; oysters, blue crab, mullet, snapper to name a few. There are two basic paths a commercial fishery can move as they grow their business. Fish for what they know and is easily harvested and convince the public to purchase – marketing. OR they can find out what the public wants and then develop a fishery to target those species. Hopefully they will find common ground; something that is available, easy to harvest, and popular with the public. 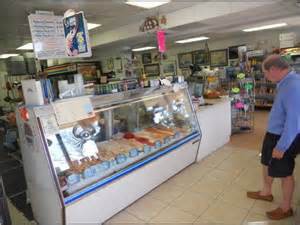 There are about 80 species of commercial seafood products that come from Florida.
Photo: Florida Sea Grant

In those surveys we looked at young and old, male and female. A couple of trends became apparent over the 20+ years we conducted these (remember, low level high school survey… but still interesting). (1) Shrimp was the no.1 favorite with all groups. That’s good, shrimping in the northern Gulf is a do-able product – many will say the best shrimp comes from these waters. But we also know that shrimping has hit hard times; more on this next week.

(2) With males No.2-5 are typically fish, with females it varies from fish to calamari, to sushi, to other. Popular fish of course are grouper and snapper… and we all know the issues with these target species in our area. There are lesser known fish with the general public, though many locals know, such as sheepshead, tilefish, pompano, that are not typically on menus. And of course a local favorite… mullet. With the mix request beyond fish include squid, crab, sushi grade fish, lobster, and others. Some of these are not common in our area and must be transported in. For many where the fish comes from does not really matter – for others it does (more on this in our last addition this month). But as you can see this type of information plays a role on how the seafood business works in the northern Gulf.

(3) The first question on the survey was “do you like seafood?” Of course if the answer was no then it was not necessary to ask further questions. The trend we saw over time was more and more stating they did not like it. Curious… I mean there are things I do not like either – so there is no problem not liking seafood – but we were curious as to why… so we added that to the survey. Our thought as we began was seafood safety. At the time much of the seafood landed was sold at a wholesale or retail market with little or no inspection – did this concern folks? In our survey we found that in most cases it did not. They just did not like the taste… fair enough. 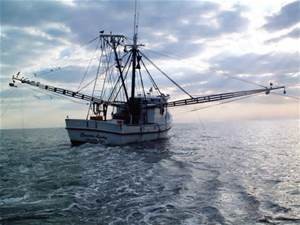 What do the bigger surveys say? In 2014 an article was posted in the Wall Street Journal discussing this issue and what other surveys found. (1) There was a decline consumption. In 2012 Americans consumed an average of 14.4 lbs of seafood/person. This was down from 15.0 lbs in 2011 and 16.6 lbs in 2004. For comparison, at that time Japanese consumed 120 lbs/person/year and Spain consumed 96 lbs. To compare this with the “big three” at that time Americans consumed 46 lbs of pork, 57 lbs of beef, and 82 lbs of chicken/person/year. Chicken is king… it is a white meat, Americans are trying to eat healthier, but fish is a white meat… so why not fish?

The surveys indicated the top reasons were

To a lesser extent there was concern over safety (particularly mercury) and some concern about genetically modified farm raised fish (salmon in particular was mentioned). Members of the chicken industry highlighted the cost of production for seafood as a barrier for them. It cost more to go to sea and harvest seafood (or raise salmon in ocean pens) than it does to produce the “big three” on farms. 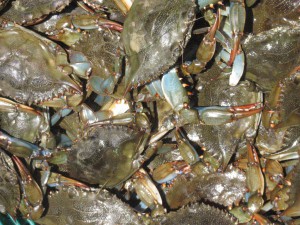 The crab of choice in the northern Gulf of Mexico; blue crab.
Photo: FWC

This year Florida Sea Grant published an article in the September issue of Florida Trends on this issue. Sea Grant pointed out that currently the national consumption of seafood is up to 15 lbs and that Floridians consume 31 lbs/person/year… so there is a trend upwards since the Wall Street Journal’s 2014 article. However 40% of Floridians do not consume 2 servings a week (as suggested by the U.S. Department of Agriculture).

We can state that seafood is healthy for you and it is safe to consume (check out Florida Sea Grant for more on this). What I am finding is that there is a small group of locals now concerned with whether the seafood they are consuming is coming from local fishermen. We will discuss more on these topics in later editions.