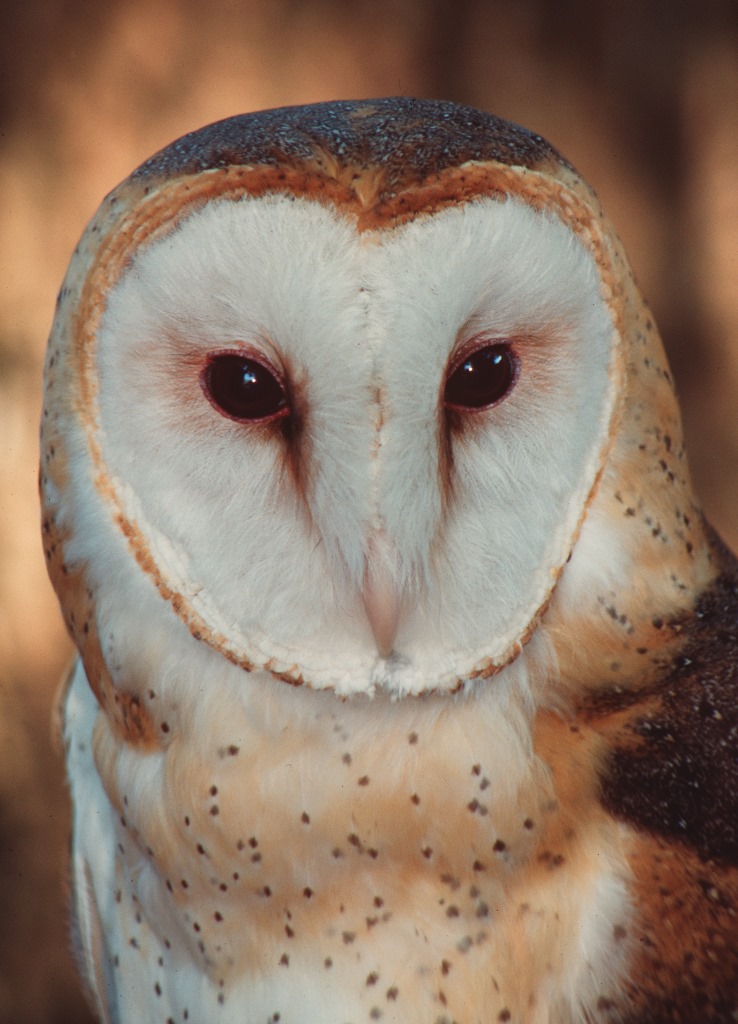 To be successful hunters of the night, owls have some truly amazing physiological adaptations. This closeup of a barn owl shows a few in the large eyes and dish shaped face that help perfect its hearing and sight. Compliments UF/IFAS File Photo

Some of my favorite creatures are owls, and as you can see by the quotes below, owls have captivated humans across the ages.

And thorns shall come up in her palaces, nettles and brambles in the fortresses thereof: and it shall be an habitation of dragons, and a court for owls.
Isaiah 34:13

“Owl,” said Rabbit shortly, “you and I have brains. The others have fluff. If there is any thinking to be done in this Forest–and when I say thinking I mean thinking–you and I must do it.”
― A.A. Milne, The House at Pooh Corner

“I think I’m a tiny bit like Harry ‘cos I’d like to have an owl. Yeah, that’s the tiny bit, actually.”
― Daniel Radcliffe (Actor who portrays Harry Potter)

According to the Florida Audubon Society, Florida is the year-round home to six (6) species of owls and four (4*) occasional visitors such as the striking Snowy Owl. These owls are listed in the Audubon of Florida Checklist of Florida Birds and are the:
Barn Owl
Barred Owl
Burrowing Owl
Eastern Screech-Owl
Great Horned Owl
Short-eared Owl
(*exceedingly rare)
Flammulated Owl *
Long-eared Owl *
Northern Saw-whet Owl *
Snowy Owl *

Each of the species links above will take you to the Cornell University CornellLab of Ornithology providing information about these owls including an audio clip of their unique calls. It’s an informative site, so be sure to click on your favorite owl for more information and to listen to their calls.

Owls are mainly nocturnal hunters, which means they are most actively feeding at night.  Depending on the species, their diet is quite varied and includes, insects, lizards, a variety of small rodents, birds, and even crayfish. Nesting pairs of owls and their voracious owlets can consume thousands of small rodents in a year. Because they eat a variety of prey and are significant rodent predators, owls are welcome residents on most farms and homesteads.

To be successful hunters of the night, owls have some truly amazing physiological adaptations, such as the ability to rotate their heads 270 degrees, ears that are offset on the sides of their head in order to pinpoint location of prey, the ability to control feathers on their dish shaped face to direct sounds into their ears, and comb like structures on their feathers to silence them in flight. The following details about these and other adaptations are taken from the Cornell University CornellLab of Ornithology – the Owl Page, and Blogs at Cornell University-Anatomy of Owls.

Sight
Owls’ large forward facing eyes give them the best stereoscopic vision of all birds, which is vital for judging distances. The shape of their eyes, their unusually high number of light-sensitive cells, their large pupils, and a reflective layer behind the retina (called the “tapetum lucidum”) give them excellent nocturnal vision useful when hunting at night or navigating dark forests. The shape of their eyes limits their ability to move them in the eye sockets, but their necks can turn up to 270 degrees.

Hearing
Their ability to locate prey by sound alone is the most accurate of any animal that has ever been tested. These owls can catch mice in complete darkness in the lab, or prey hidden by vegetation or snow out in the real world. Their ears are placed unevenly on their head and point in slightly different directions, giving the ability to hear where a sound is coming from without moving their heads. Owls can also funnel sound toward their ears by manipulating different types of feathers around the ears and face.

Silent Flight
On both the primary and secondary feathers, there are comb-like structures at the edge of the feather that are responsible for muffling the sound of the air going over the wing – this essentially makes an owl silent when they fly. Also, an owl’s feathers can separate from each other on the same wing; therefore, the air flows over each of the individual feathers and their comb-like structures, which maximizes how silently an owl flies. 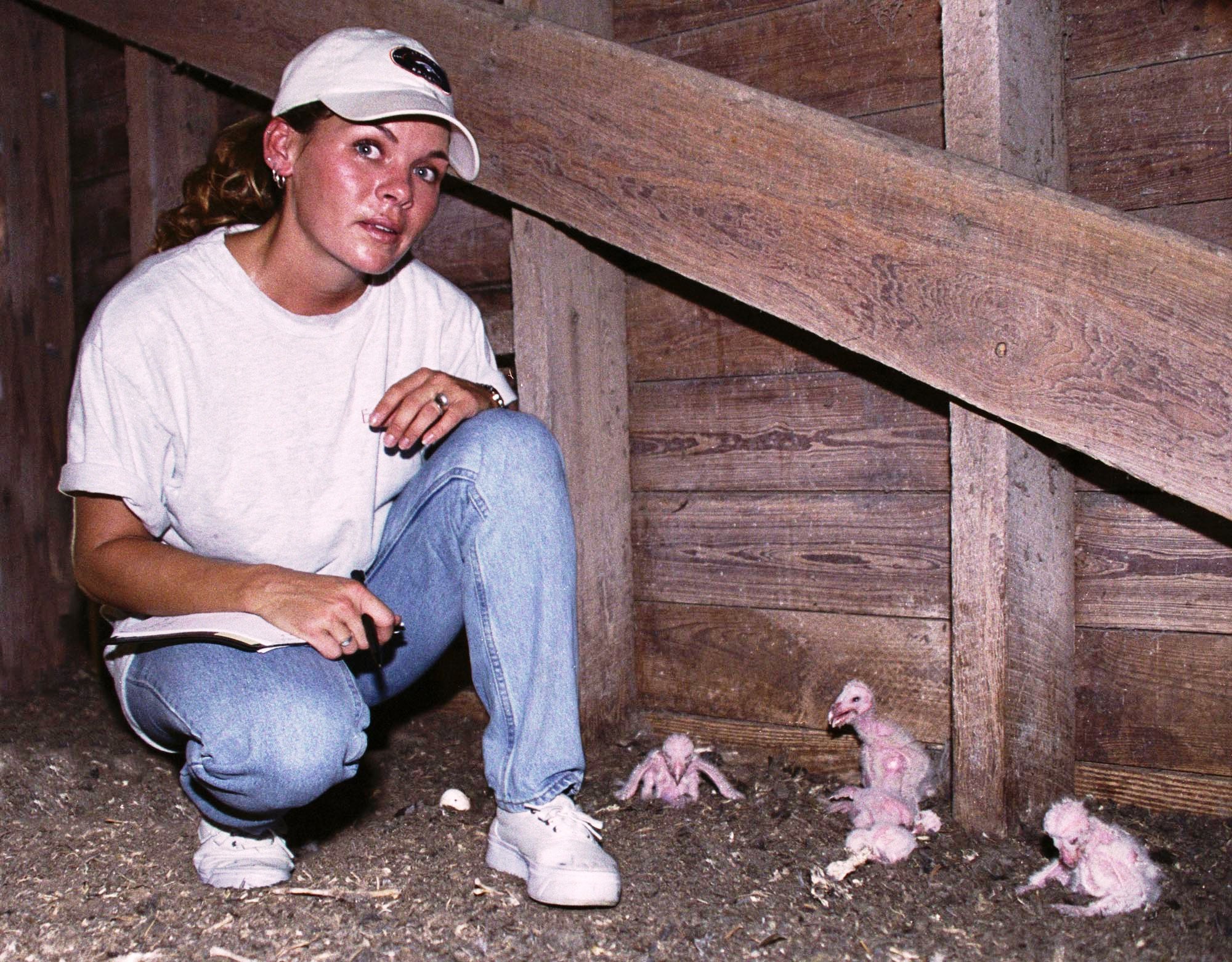 BELLE GLADE—University of Florida graduate researcher Cosandra Hochreiter checks on a barn owl nesting site on the grounds of UF’s Everglades Research and Education Center. The five owlets in this corner were among several babies and their parents nesting in this abandoned barn at the research center. Researchers are trying to boost the population of barn owls in the Everglades Agricultural Area because they are a natural form of rodent control. Rodents can cause up to $30 million damage per year to sugar cane and vegetable crops, and a nesting pair of barn owls can eat almost 3,000 rodents over the course of a year. Compliments UF/IFAS File Photo

Owl Pellets
Owls swallow their prey whole or in large pieces, but they cannot digest fur, teeth, bones, or feathers. Like other birds, owls have two chambers in their stomachs. In the first chamber, all the digestible parts of an owl’s meal are liquefied. Then the meal passes into the second chamber, the muscular stomach or gizzard, which grinds down hard structures and squeezes the digestible food into the intestines. The remaining, indigestible fur, bones, and teeth are compacted into a pellet which the owl spits out. Owls typically cast one pellet per day, often from the same roosting spot, so you may find large numbers of owl pellets on the ground in a single place.

Nesting
Owls will typically nest in cavities of mature trees, or will use the nests of other birds or even squirrels. Burrowing Owls nest in the ground, and although it can dig its own burrow, it often uses holes already created by skunks, armadillos, or tortoises. Some owls will use artificial nest boxes, and building plans for the Great horned, Barred, and Barn owls are found here at this website: Cornell University CornellLab of Ornithology – the Owl Page

So, the next time you are enchanted by the familiar sound of our common Barred Owl, or if you happen to find a few owl pellets below a tree, think also of the many amazing attributes of Florida’s owls, our stealthy nocturnal predator.

For more information on this topic please see the following resources used for this article: 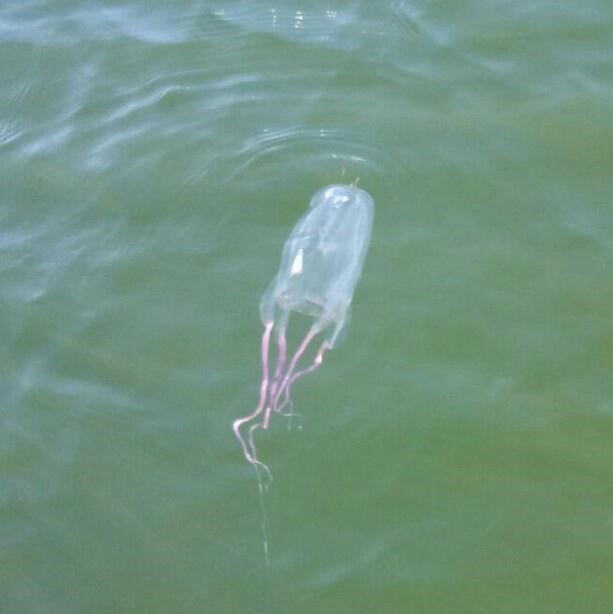 Box Jellies in the Gulf of Mexico?

Yep, but do not get to alarmed just yet… it is not the same species as the famous one from Australia. That said… who is this new invader to our waters and is it of concern? 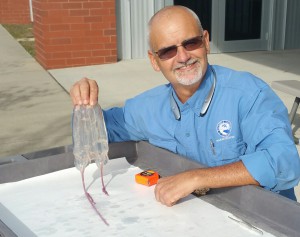 This Four-handed box jelly was found near NAS Pensacola in 2015.
Photo: Courtesy of Robert Turpin

According to NOAA and the University of California at Berkeley there are between 20-50 species of box jellies from around the world. Their distinct shape, often called “cubomedua”, places them in their own family. Most of the “medusa” jellyfish we know are in a group called “scyphozoans” but box jellies differ in several ways.

Box jellies are found in all tropical seas, including the south Atlantic and Gulf of Mexico. They range in size from less than an inch to about 8 inches, with tentacles extending as far as 10 feet behind. Breeding in this group is interesting. Males will place their tentacles inside the bell of the female and deposit sperm. The female will then fertilize her eggs and release planktonic larva called planula. These planula will drift in the currents for a short period before metamorphosing into a flower-like creature called a polyp. Polyps are sessile (non-swimming) and attach to hard structures on the ocean floor. Here they can move and adjust to feed with their extended tentacles and can actually produce more polyps by budding. After a period of time each polyp will metamorphose into a swimming medusa, the box jelly we know and love. As already mentioned, they swim with purpose hunting small fish and invertebrates. They do have their predators. Certain fish and sea turtles are known to consume with no ill effects.

They all possess a very strong toxin which is quite painful. The most toxic of the group is Chironex fleckeri, the famous one from Australia. This jellyfish has been listed by many, including NOAA, as the most venomous marine animal in our oceans. It has certainly caused death in their waters. The majority of the lethal box jellies live in the Indo-Pacific. So what about Florida?

I am aware of two species that have been found here. The “Four-handed Box Jelly” (Chiropsalmus quadrumanus) and the “Mangrove Box Jelly” (Tripedalia cystophora). The Four-handed box jelly is the larger of the two, and the one pictured here. The Mangrove Box Jelly typically lives in the Caribbean. The first reported in south Florida was in 2009 near Boca Raton but they have since been reported in the Keys and along the Southwest coast of Florida. This is a small box jelly (about 0.25” in diameter) and seems to prefer the prop roots of mangrove trees.

The Four-handed box jelly can reach almost 5” in length with up to 10’ of tentacles attached. It is more widespread in Florida, though more common on the Atlantic coast then our own. One was brought to me about 6 years ago. The person found it next to pier at Quietwater Boardwalk, in the evening, swimming around the lights shining in the water, it was near Thanksgiving also. The one pictured here was seen by a local surfer and by Robert Turpin (Escambia County Division of Marine Resources) last week. Both sightings were near NAS Pensacola and may have been the same animal. This box jelly has the same characteristics as others – box shape, clustered tentacles, and very painful sting. The surfer who brought me the one from 6 years ago was stung by it. He said the pain brought him to his knees… so do not handle this animal if you see one. There was a report of a small child who died after being stung by one in 1991. However there are reports of young kids dying from the Portuguese man-of-war as well. Lesson here… treat it with caution.

These box jellyfish are not the deadly ones known from Australia, and it is certainly not common here – preferring to stay in the open ocean more than nearshore, but it is an animal all should know about and avoid handling if encountered.

More resources on this animal: