What is the El Niño?

In our last article about the red tides we discussed how the strange weather of 2015 caused some changes in the natural world around Pensacola Beach – mainly, it got warmer. Though climate change is happening, and we just had a major summit on the topic in Paris, the warming of 2015 was most directly impacted by one of the strongest El Niño’s on record.

What is an El Niño?
It is a term most of us have heard and know it has something to do with the climate – that it is associated with warming – but little else about it. It is a climatic phenomena that has been occurring for centuries. It was first reported by Peruvian fishermen around Christmas time – hence the name El Niño (“the child”). 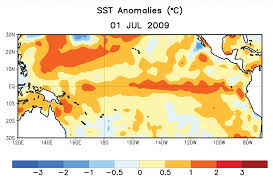 The ocean currents off the coast of Peru, and California, are quite cold – in the 55 F range. These cold currents move from the poles towards the equator along the coast. These cold currents keep the precipitation low and the air dry – “it never rains in Southern California”. Mountains and deserts are associated with these regions as well. The cool air at the top of the mountains flows down and across the landscape towards the ocean – causing the surface waters along shore to move offshore – thus creating a current from the ocean floor to rise to the surface called an upwelling. These upwellings bring with them an abundance of nutrients and, mixed with the high oxygen content of the colder water, provide a soup for plankton growth which is food for an abundance of fish – these are some of the richest fishing grounds in the world.

Every so many years the fishermen noticed the fish would disappear. It usually began around Christmas time and they would have to find another means to make a living until they returned – which they always did. They would note this in their log books and we know now that the El Niño would occupier every 7-11 years. Marine and climate scientists noticed that during these El Niño years other species would suffer and the climate would change – the El Niño was not just about fishing. Measurements showed that the current temperatures off of California and Peru warmed during El Niño years from 50 to 80 degrees! The upwelling would stop, the fish would leave, the seals could not feed their young, it rained in places where it normally does not rain, and drought would occur in other parts of the world. Coral reefs would suffer and other global climate changes would occur. 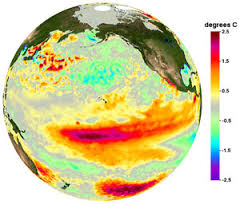 What they have discovered is that the cold ocean currents from the poles that pass California and Peru typically reach the equator and flow westward towards Indonesia and Australia. As the water moved along the equator it would warm producing the tropical reef world of Southeast Asia and the Great Barrier Reef. But during El Niño years this warm water begins to move eastward – back towards California and Peru. The cause is not fully understood yet. But the dry air of California becomes moist, rain falls, which effects the climate all across the country. One notable event locally is that most of the hurricanes are pushed upwards into the Atlantic and miss the Gulf of Mexico. The El Niño usually last a year. One other note here also. El Niño is typically followed by a year of drastic cooling – the La Niña.

How are the El Niño’s effected by climate change?
Some scientist believe the frequency of El Niño will not change but that the frequency of “super” El Niño’s will – they will increase. “Super” El Niño’s occurred twice in the last 20 years and the impacts on fishing, agriculture, and other human actives have been significant. The over all warming of the oceans will fuel a stronger warming event during an El Niño year. W are currently having the strongest “super” El Niño on record.

We will see what 2016 brings, it will be interesting. I know it is 70 degrees right now (December 28) and there are butterflies in my yard.