It’s a calm clear weekday in January. There’s a single buzzard soaring above, two squirrels scurrying in the trees and a pileated woodpecker calling in the distance. It’s hard to imagine this site was the capital of civilization in North Florida some 1200 or more years ago. The visible exception is the weathered remnant of “The Great Mound”, a massive earthen mound forty-six feet high and over 300 feet wide at its base. This is the largest Native American ceremonial mound in Florida, containing millions of twenty pound baskets of earth. Archeological sampling shows the builders mixed different types of earth to create a more stable structure. The mound’s persistence confirms the builders’ wisdom. 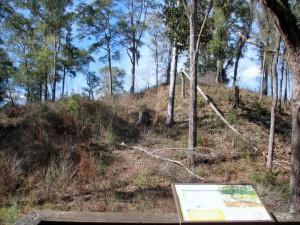 Twelve hundred years of erosion and overgrowth contrast with this Park depiction of the Great Mound in it’s heyday
Photo: Jed Dillard 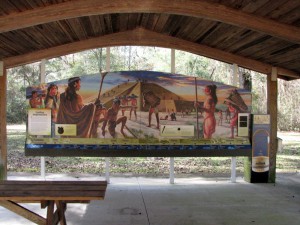 Artifacts show the site was occupied up to 12, 000 years ago, long before the mound was built. The mound’s builders are believed to have been members of the late Swift Creek (200-450 A.D.) and early to middle Weeden Island cultures, a group of Native Americans who lived in North Florida between 450 and 900 A.D. Other authorities have suggested the mound was more of the style of later cultures, for example the Mississippians. Either way, these were relative new comers compared to the Paleoindians. Paleoindian tool marks were found on a mastodon tusk from the Aucilla River bottom and a stone point was found in the skull of a Bison antiquus raised from the Wacissa River bottom. Bison antiquus is believed to have disappeared around 10,000 years ago and the mastodon tusk was carbon dated as 12,000 years old.
The Letchworth-Love Mounds archeological site in western Jefferson County preserves Mound 1, as it’s called in documents. Discovered in 1932, but officially unrecorded until 1975, the mound is surrounded by over twenty mounds outside the park in the area on the shore of Lake Miccosukee. The Lake Jackson Mounds Archeological State Park north of Tallahassee is believed to be a later, separate settlement.
At the height of its functions, the immediate Great Mound complex had 10 smaller mounds and two plazas. The Mound itself had two side platforms, an earthen ramp and a peak styled similar to Meso-American structures. The main village was to the south of the complex near Lloyd Creek. Other high ground near water in the county hold evidence of at least temporary camps and towns.
Now the capital of Florida civilization is 30 miles west in another skyscraper, and the chiefs are debating ownership of the artifacts from the oldest capital. Wouldn’t this be a good time to learn more about our history?
The park is located on South Sun Ray Road off US 90 and is open from sunrise to sunset. Don’t expect a crowd.