NISAW 2016 – An Update on the Lionfish Situation in the Panhandle 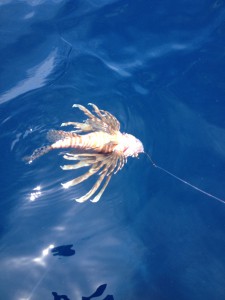 Hooking a lionfish in local waters is still a rare event but reported encounters with anglers are increasing. (Photo Courtesy of Florida Fish and Wildlife Conservation Commission).

An Update on the Lionfish Situation in the Panhandle

In the past couple of years, we have posted articles about the lionfish during NISAW week.  A question we hear more now is – “how is lionfish management going?”

First, they are still here…

Wish I could say otherwise, but they are here and probably always will be.  Since the time of the first sighting in 2010 their numbers have increased. In 2013 Dauphin Island Sea Lab reported densities on artificial reefs at 14.7 lionfish / 100m2; which was among the highest recorded in the western Atlantic and the time.  At some point all populations reach carrying capacity and begin to level out; we do not know if this has begun to happen yet.

Scientists have suggested that effective management would require a minimum 25% of the population to be removed during removal events.  We are not sure how many are out there but FWC does maintain records on how many have been removed.

So why the decrease in effort?

Speaking with members of the Gulf Coast Lionfish Coalition – time and money.  Coordinating and hosting derbies is time-consuming, and those who were volunteering their time were charter captains who forwent charters to do this… money.  Everyone who has worked on lionfish since the 1980’s has commented that derbies have a lifespan.  They are effective at removing large numbers of lionfish, especially if repeated often, but that they alone will not solve the problem.

Well, here in Escambia county we are looking at the possibility of lionfish as a seafood product.  At the Lionfish Removal and Awareness Day in Pensacola several local chefs’ tried different recipes with the public; one restaurant even offered smoked lionfish dip!  The public seemed to like the fish but the cost of a fillet can be quite high.  Publix offers a program called “Reel Variety” where you can order any fish you are interested in – lionfish is one, but the price ranges from $20-$30 / lb.  Local divers in the Pensacola area are currently selling lionfish at prices bit lower but for the dip; fillets are still pricy.  We will continue to experiment with this idea and see, if a low by-catch lionfish trap, can be developed and whether that will bring prices down.  We are also monitoring for lionfish inside of our bays.  In 2015 we can confirm two lionfish found inside Pensacola Pass in Big Lagoon; we will continue to monitor in 2016.

In Okaloosa County the Emerald Coast Reef Association is working on a proposal that would reward those removing lionfish with permission to catch other regulated species out of season.  We will see where 2016 takes us.  The 2016 Lionfish Removal and Awareness Day will again be in downtown Pensacola May 14-15.

Red Lionfish are a predatory reef fish that are non-native invasive species and have spread throughout Florida Waters. They are members of the family Scorpaenidae whose members are venomous and the lionfish is no exception. This fish is relatively small ranging from 10-12 inches in length and have a zebra-like appearance with long, showy pectoral fins. They have a row of long dorsal spines that contain venom glands. Their native range is the South Pacific and Indian Oceans and preferred habitat is on offshore reef structures. These fish are considered to be voracious eaters feeding on native fish, reducing vital native populations, and competing for food with native fish such as grouper and snapper.

With few predators, these fish are thriving in Florida waters, even in the northern Gulf of Mexico. They reproduce often, under good conditions as often as every 3-4 days, with eggs hatching after about two days. They also consume a variety of local species. Research has found in some cases there has been an 80% decline in reef fish recruitment and loss of some economically important species. These fish are able to expand their stomachs for large meals and can survive starvation for over 12 weeks. Lionfish are an invasive species in our local waters and removal is encouraged.

The most effective control of this species is removal by spearfishing; though some recent reports of hook and line capture using live bait have occurred. Lionfish are cryptic and nocturnal but local divers have found them hovering near reefs at midday. Florida Fish and Wildlife Conservation Commission (FWC) changed regulations to increase harvesting opportunities. Such changes include no requirement for a recreational fishing license when using spearing devices (pole spear, a Hawaiian Sling, handheld net, or spearing devices marked for use on lionfish), and no recreational or commercial bag limit; though recreational fishing license is required for other fishing methods. Check the FWC regulations before fishing or diving for these species.

Lionfish are venomous, must be handled carefully, venom glands occur on the dorsal, pelvic and anal spines. Lionfish sightings can be reported at 877.786.7267, the newly released FWC lionfish app,or (if in the Pensacola area) the lionfish map. If stung the wound can be treated with warm (but not scalding) water. You may need to seek medical attention as soon as possible. Rarely are stings fatal unless the person has an allergic reaction. The Poison Help Hotline can be reached at 800.222.1222. Inshore sighting information is being collected by Florida Sea Grant in Escambia County to track the movement of these species. You can fill out the online report on the USGS website or the REEF website and stay up to date on research as it pertains to this species at the new NOAA lionfish portal and Florida Sea Grant.