Be Beach Aware with Jellyfish Out There

Summertime and swimming at the beach just go together naturally in Florida with our state’s more than 1,000 miles of coastline. Many fond memories are created along these salty margins and the Panhandle region of the state has some of the top-rated beaches in the world. It is a great place to experience a relaxing, cool dip in the Gulf of Mexico on a balmy summer day. One thing to be aware of though is the possibility of an encounter with one of the Gulf’s “stinging” inhabitants and what to do if this occurs. 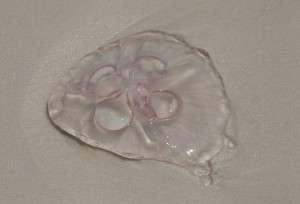 There are actually several different organisms that have the capability to sting. This is primarily their mechanism for capturing food but it may also serve to deter predators. Most belong to a group of organisms called “Cnidarians,” which includes the jellyfish. Most jellyfish are harmless to us and are important food sources for many other marine creatures, including some sea turtles, fish and even other jellies! Some species are even dried, shredded and eaten by humans. However, there are several types of jellyfish that will inflict a sting when brushed against and some that are actually a serious hazard. Keep in mind that people also react differently to most venoms, exhibiting varying degrees of sensitivity. The most dangerous types include some of the box jellyfish species (visit HERE for general map of worldwide jellyfish fatalities), and the blue-colored Portuguese man-o-war, which is sometimes common on our shores after sustained southerly winds during summer. A few of our locally common species that cause pain but of a generally less-severe nature include the moon jelly, sea nettle, and cannonball jellyfish. We even have some species of hydroids that look very much like a bushy brown or red algae. They are usually attached to the bottom substrate but when pieces break off and drift into the surf they can provide a painful encounter.

If you are stung there are a couple of things you can do to help and a couple of things you should not do. First, move away from the location by getting out of the water so you don’t encounter more tentacles. Carefully remove any visible tentacle pieces but not with your fingers. You should also change out of swimwear that may have trapped pieces of tentacles or tiny larval jellyfish against the skin. Do not rinse the area with fresh water as this causes the remaining stinging cells to fire their venomous harpoons. If symptoms go beyond a painful sting to having difficulty breathing or chest pain you should immediately call the Poison Information Center Network at 1-800-222-1222 or call 911.

Another thing to watch for in areas where public beaches display the beach warning flag system is a purple flag. This flag color at the beach indicates dangerous marine life and quite often it is flown when jellyfish numbers are at high levels. All of this is being written, not to scare you away from our beaches, but to help you enjoy our beautiful coastline with a little better understanding of what is out there and what to do if you happen to have a brush with a jellyfish. The vast majority of encounters are a minor irritation in an otherwise pleasant experience.