Panhandle Saltmarshes: Riches Beyond our Dreams

The Florida Panhandle is fortunate to have an abundance of salt marsh habitat fringing many of our coastal environs. Although this habitat may not receive the appreciation it deserves by those seeking a white-sandy beach, it is intricately linked with many of the natural treasures we are blessed with. Salt marshes occur in the ecotone where the land connects with the salty water and they are occupied by a special assemblage of salt-tolerant, hydrophytic plants that provide benefits on many levels. Literally, levels that stretch vertically from the substrate to the tops of the grasses, and horizontally as the plant species are arranged into different zones depending on water depth. These habitats typically occur in coastal areas of lower wave energy, where the marsh plants can establish and thrive. Often this is in our bays and estuaries that are afforded some protection from storms that blow in from the open Gulf. Looking from the land outward, the classic salt marsh vegetation zones begin with the high-marsh which only gets inundated during extremely high tides. This area is dominated by a grass called marsh hay (or salt meadow) cordgrass (Spartina patens) that grows in wiry-leaved clumps. You can also find salt grass (Distichlis spicata) which has shorter, flat leaf blades that project from the stem at a distinctive angle. The mid-marsh zone is typically in and out of the water on daily tides and is usually dominated by a species of rush called black needlerush (Juncus roemerianus). The low-marsh grows in an area that stays under water much of the time and is inhabited primarily by smooth cordgrass (Spartina alterniflora) in our Gulf Coast marshes.

Ecologically speaking, you might deduce that salt marshes are not incredibly diverse, at least as far as plant species inhabiting them. However, the structure, cover and vegetative food components that are available here support a tremendous assortment of animals; some that we depend on for seafood, some that our seafood depends on in a complex food web, and others that are simply a pleasure to know about. Many utilize these grassy nearshore areas during the juvenile portion of their life cycle. Baby crabs, shrimp and fish find many of their needs met here. Just spend a few minutes quietly observing in this habitat and you’ll be amazed when you notice the baby mullet, spotted sea trout, redfish, killifish, fiddler crabs, and a host of other creatures going about their “marshy” business. It is also a special treat to conduct a nighttime investigation with a flashlight here. Just wear protective shoes as oysters often grow in these places. 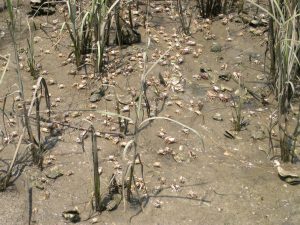 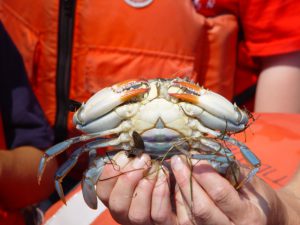 One group of animals that depends on this habitat is our coastal bird life. In fact, there is a subset of birds here that has been dubbed with the title “secretive marsh birds,” because they rarely come into the open where people can see them. This group includes several species of rails, bitterns, gallinules and others. Scientists have been concerned about declines in many of these species so standardized methods have been developed to survey them using broadcast recordings to elicit vocalizations that can be counted by researchers. There are also many not-so-secretive marsh birds that find their needs met in our marshes. Harriers visit during the winter months, blackbirds and sparrows find nesting cover here, and egrets, herons and kingfishers dine on the fish and invertebrates that are abundantly plentiful during key stages of their nesting and chick raising cycles.

Last but not least (in my book) are a couple of reptiles that can be found in our saltmarshes. The gulf salt marsh snake (Nerodia clarkii) uses the marsh for cover and to find its preferred diet of small fish, crabs, shrimp and other invertebrates. They spend their days generally hiding under debris, being more active at night. They can be recognized by their four lengthwise yellowish stripes and the fact that you aren’t likely to find another snake in the saltmarsh. However, I have seen a cottonmouth or two spending time here, so be careful. The other unique reptile we can find in select areas of our marshy coastline is the ornate diamondback terrapin (Malaclemys terrapin macrospilota). These charismatic coastal turtles are sexually dimorphic, with males only reaching about five inches and females growing to around eight inches. The yellow centers on the dark scutes of the back are a definitive identification feature, along with very pale gray skin that may be speckled with black dots. Terrapins feed primarily on mollusks and crabs and use the adjacent upland areas for laying their eggs. Terrapins have suffered dramatic declines throughout their range because they are attracted to bait in crab traps and can be trapped and drowned. There is a simple conservation solution though. If you are in an area that terrapins frequent you can install a rectangular exclusion device in your trap funnels that will keep out terrapins but let crabs through. Awesome invention! 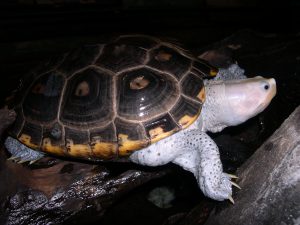 Take some time to visit our incredible coastal marshes and appreciate the diversity of life they provide us, along with the most profound serenity of any beautiful, wide-open vista that you’ll ever find anywhere.