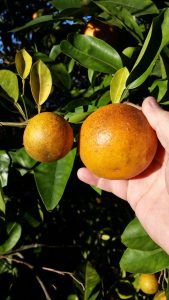 If we look at the big picture when it comes to invasive species, some of the smallest organisms on the planet should pop right into focus. A microscopic bacterium named Candidatus Liberibacter asiaticus, the cause of Citrus Greening (HLB), has devastated the citrus industry worldwide. This tiny creature lives and multiplies within the phloem tissue of susceptible plants. From the leaves to the roots, damage is caused by an interruption in the flow of food produced through photosynthesis. Infected trees show a significant reduction in root mass even before the canopy thins dramatically. The leaves eventually exhibit a blotchy, yellow mottle that usually looks different from the more symmetrical chlorotic pattern caused by soil nutrient deficiencies. 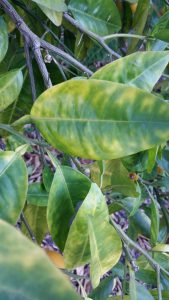 One of the primary vectors for the spread of HLB is an insect called the Asian citrus psyllid. These insects feed by sucking juices from the plant tissues and can then transfer bacteria from one tree to another. HLB has been spread through the use of infected bud wood during grafting operations also. One of the challenges with battling this invasive bacterium is that plants don’t generally show noticeable symptoms for perhaps 3 years or even longer. As you would guess, if the psyllids are present they will be spreading the disease during this time. Strategies to combat the impacts of this industry-crippling disease have involved spraying to reduce the psyllid population, actual tree removal and replacement with healthy trees, and cooperative efforts between growers in citrus producing areas. You can imagine that if you were trying to manage this issue and your neighbor grower was not, long-term effectiveness of your efforts would be much diminished. Production costs to fight citrus greening in Florida have increased by 107% over the past 10 years and 20% of the citrus producing land in the state has been abandoned for citrus.

Many scientists and citrus lovers had hopes at one time that our Panhandle location would be protected by our cooler climate but HLB has now been confirmed in more than one location in backyard trees in Franklin County. The presence of an established population of psyllids has yet to be determined, as there is a possibility infected trees were brought in. 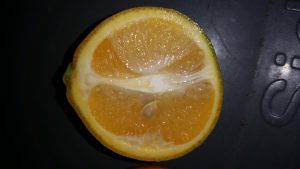 A team of plant pathologists, entomologists, and horticulturists at the University of Florida’s centers in Quincy and Lake Alfred and extension agents in the panhandle are now considering this new finding of HLB to help devise the most effective management strategies to combat this tiny invader in North Florida. With no silver-bullet-cure in sight, cooperative efforts by those affected are the best management practice for all concerned. Vigilance is also important. If you want to learn more about HLB and other invasive species contact your local UF/IFAS Extension office.