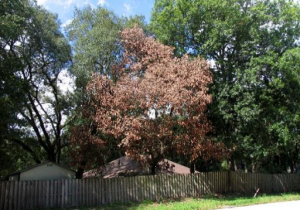 Many invasive plants and insects are introduced in packing materials, including 12 species of ambrosia beetles, which embed themselves in wood used as crates and pallets. While these tiny beetles don’t actually feed on wood, the adults and larvae feed on fungi that is inoculated into galleries within the sapwood by the females when they deposited their eggs. While the ambrosia fungus keeps the beetles alive, it kills the host tree. This is the projected fate of redbay trees (Persea borbonia) due to the Redbay Ambrosia Beetle.

First detected in the United States in a Georgia trap in 2002, Xyleborus glabratus, the Redbay Ambrosia Beetle, caused substantial mortality of redbay in northern Duval County, Florida in 2005. This ambrosia beetle introduces fungal spores, (Raffaelea lauricola) from specialized structures found at the base of their mandibles into the vascular system of plants when boring into host trees of the Lauraceae family. This insect and disease complex has collectively been named “Laurel Wilt.”  Infected redbays, assafrass and avocado trees wilt and die within a few weeks or months. 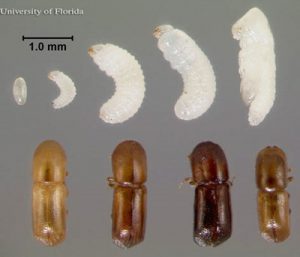 The Redbay Ambrosia Beetle is a shiny black, cylindrical insect about 2 mm in length. The males are flightless and the females can only fly short distances (1 – 1.5 miles). Therefore, host trees are often attacked many times and stands of redbays are damaged quickly. Small strings of compacted sawdust may protrude from the bark at the point of initial attack. However, wind and rain easily remove this sign leaving the only symptom to be the total browning of foliage in a section of the tree’s crown. Since the fungus blocks the xylem (water-carrying) tissue of the redbay, it appears to wilt while leaves remain attached. Once infected, the trees cannot be saved.

To avoid spreading the beetle and pathogen to new areas, the trees need to be cut down and wood or chips from the infested trees should not be transported off site. Where allowed, the materials should be burned on site. Protection of unaffected trees is possible with expensive pesticides if applied in a timely manner and using the correct techniques. Removal of all susceptible tree species is not recommended. The survivors may hold a genetic tolerance.