The American Alligator: a new nuisance for the panhandle?

I recently saw a photograph of an American Alligator (Alligator mississppiensis) crossing Perdido Key Drive on a heavy rain day.  This encounter would surprise some, and unnerve many.  The majority of the nuisance wildlife calls I receive are for snakes.  I have never received a call for an alligator but no doubt, my colleagues in central and south Florida have.  They certainly will with the landfall of Irma.  Just as humans relocate for storms, wildlife does as well.  High, dry ground is a need for all, and as our friends return to their homes after the storm, they will no doubt encounter creatures in the debris that can be a bit unnerving. 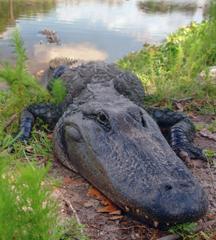 “Nuisance” is in the eye of the beholder. Defined by the Merriam-Webster dictionary as being annoying, unpleasant, or obnoxious, a nuisance species is one we would rather not have in our yard.  Snakes are one of those.  Most of the people who call about snakes wish them no harm; they just do not want them on their porch or in their pool.  Venomous snakes in particular raise anxiety levels, especially when children or pets are around.  Though we do not get many calls on alligators, the feeling a homeowner would have if they found one in their driveway would be the same.

There were no calls on the alligator on Perdido Key. Actually, not everyone believed the photo to be legit.  I cannot verify it, but I did receive a call earlier this summer when an American alligator was found swimming and basking on a Gulf beach in Navarre and later near Ft. Pickens.  Though not as common as they are in central and south Florida, alligators do live here and they are found on our barrier islands.  Though encounters with them are rare, how should a homeowner deal with this potential nuisance? When I give a program on snakes I typically go over four points.  Let us go over the same with the alligators.

Is it venomous or not?

Obviously, this is not a question here – no crocodilian is venomous. They do have bacteria in their mouths that have caused problems for some who have survived an attack, but there is no venom.  However, in south Florida identification is still important because there is more than one crocodilian roaming the landscape.  The American Crocodile (Crocodylus acutus) is a native species found in coastal waters of south Florida, the northern reach of its range.  The Speckled Caiman (Caiman crocodylus) is an exotic species from Central and South America that is now found in freshwater canals and lakes of southeastern Florida.  It is likely that post Irma cleanup will include encounters with these two.  However, this is not likely for the panhandle – our winters are too cold.

How do I avoid encounters?

Generally encounters with nuisance wildlife occur for one of two reasons; (a) we have moved into their habitat or (b), they have come to us.

With the population of Florida growing at an ever increasing rate, currently 21 million people and a growth rate of 1.77%, development continues to expand into habitat where these animals have remained out of our sight for some time. As we continue to move into these habitats, encounters with nuisance wildlife will increase. They will be forced to visit our yards and pools.  It is no different with bears.

In other cases we, either knowing or unknowingly, provide food and shelter for them. Predators tend to select the easiest prey to kill, the ones that take the less energy.  Human development tends to provide habitat for vermin, such as rats, in concentrated areas.  This makes hunting for predators, such as snakes, bears, and alligators, much easier – and they will take advantage of this.

With alligators, (a) is more problematic than (b). Alligators have a natural fear of humans and do not typically seek us out looking for easy prey.  They seem to prefer to live and hunt away from us.  However, feeding alligators changes this and thus, it is a felony to do so in our state.  In 2015, the state legislature developed a tiered penalty system for assessing fines and charges.  As we continue to develop in areas where alligators live, it will be harder to avoid encountering them.

What do I do if I encounter one?

The general nature of wildlife is reacting to predators, prey, reproduction, and shelter. Alligators are top predators and feed on a variety of species.  They are opportunistic hunters, selecting prey they can easily swallow and are relatively easy to catch.  Much of these are smaller animals.  If the opportunity to make a large kill presents itself, they will – however, they will drown the creature and leave it underwater to soften the carcass so they can swallow.

The method of capture usually involves lying still and waiting for prey to move within range. If encountering an alligator the questions that come to mind are: (1) am I within range?  (2) are we near water? – remember they need to submerged large prey.  Keep in mind that small children and pets are easier prey and care should taken when in alligator habitat.

Resources provide the following suggestions if an encounter occurs: 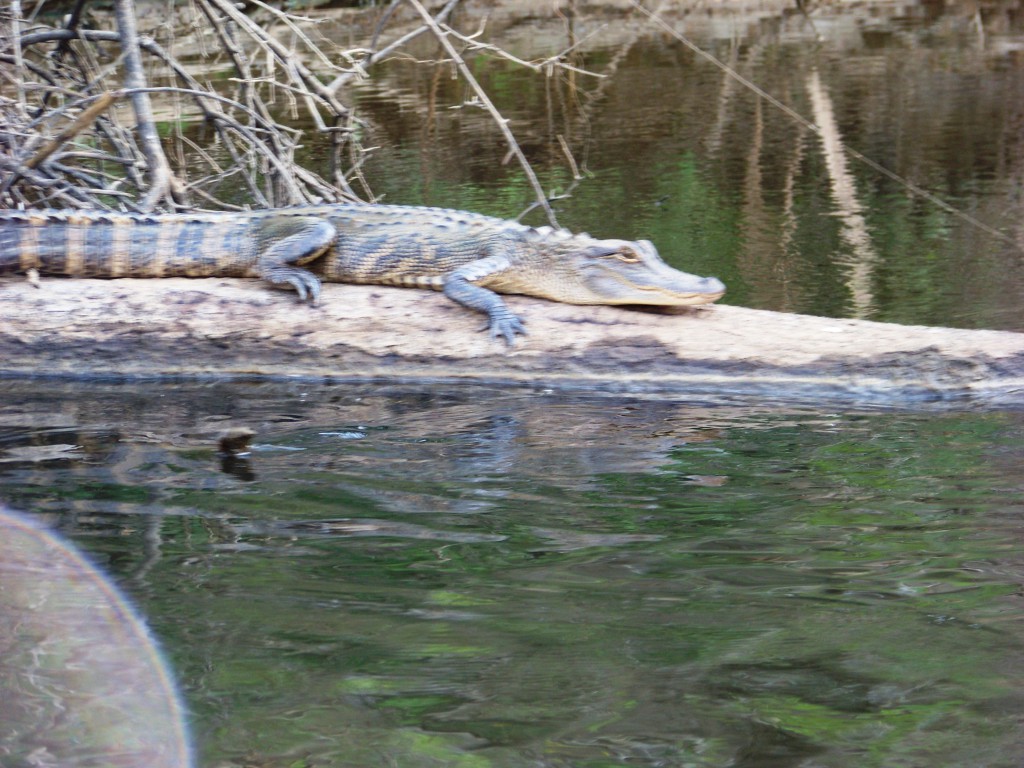 And what if I’m bitten?

This question makes sense if you are talking snakes. With snakes, you are bitten and the snake withdraws.  So the question comes up, now what? Not so much with alligators.  Though alligators tend to feed on smaller and softer prey, as they increase in age and size, their skull structure adjust to where they can crush turtle shells and mammal bones.  Forces have been recorded between 12 and 9452 Newtons, depending on age.  When they bite they do not typically withdraw, but rather will drag you into water.  Do whatever you can to avoid being dragged into water.  Since 1948 there have been 388 alligator attacks, 24 were fatal.  That averages to 6 attacks/year statewide and about 1 fatality every 4 years – so it is not very common.  But remember, human development is encroaching and we will need to learn to live with them as our ancestors did when the animals were more numerous.

In Florida, an alligator is not considered a nuisance unless it is at least 4 feet in length. If you feel there is a nuisance alligator in your neighborhood you can call.

Texas Parks and Wildlife. If You See An Alligator. https://tpwd.texas.gov/huntwild/wild/species/alligator/safety/index.phtml.