A Ghost in the Woods 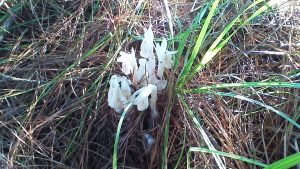 Imagine you are enjoying perfect fall weather on a hike with your family, when suddenly you come upon a ghost. Translucent white, small and creeping out of the ground behind a tree, you stop and look closer to figure out what it is you’ve just seen. In such an environment, the “ghost” you might come across is the perennial wildflower known as the ghost plant (Monotropa uniflora, also known as Indian pipe). Maybe it’s not the same spirit from the creepy story during last night’s campfire, but it’s quite unexpected, nonetheless. The plant is an unusual shade of white because it does not photosynthesize like most plants, and therefore does not create cholorophyll needed for green leaves.

In deeply shaded forests, a thick layer of fallen leaves, dead branches, and even decaying animals forms a thick mulch around tree bases. This humus layer is warm and holds moisture, creating the perfect environment for mushrooms and other fungi to grow. Because there is very little sunlight filtering down to the forest floor, the ghost flower plant adapted to this shady, wet environment by parasitizing the fungi growing in the woods. Ghost plants and their close relatives are known as mycotrophs (myco: fungus, troph: feeding). 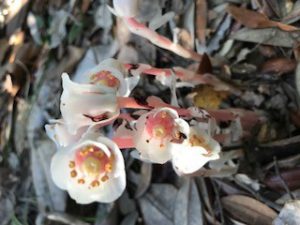 These plants were once called saprophytes (sapro: rotten, phyte: plant), with the assumption that they fed directly on decaying matter in the same way as fungi. They even look like mushrooms when emerging from the soil. However, research has shown the relationship is much more complex. While many trees have symbiotic relationships with fungi living among their root systems, the mycotrophs actually capitalize on that relationship, tapping into in the flow of carbon between trees and fungi and taking their nutrients.

Mycotrophs grow throughout the United States except in the southwest and Rockies, although they are a somewhat rare find. The ghost plant is mostly a translucent shade of white, but has some pale pink and black spots. The flower points down when it emerges (looking like its “pipe” nickname) but opens up and releases seed as it matures. They are usually found in a cluster of several blooms.
The next time you explore the forests around you, look down—you just might see a ghost!