Man what a winter!

Between multiple days below freezing, tough traveling, and the flu it has been a brutal winter season so far. 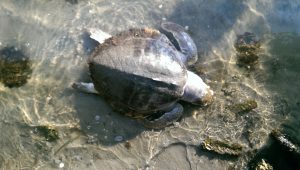 It is not that different for some of our marine wildlife friends. The low temperatures have driven marine water temperatures down as well, particularly in the shallow areas.   There have been many reports of cold stunned sea turtles up and down the Florida panhandle – over 900 of them.  There have been reports of cold stunned iguanas falling from trees and the loss of pythons in south Florida.  The question sometimes comes up – “how do they deal with this apparent return from the dead?”

So what’s up with the cold-stunned situation?

Well… even with the “cold bloods”, extreme temperature changes can be very stressful. Some respond by changing their behavior, others their physiology, others both.  They will alter their feeding – basically stop.  In some, the pH and ion balance within their blood becomes unbalanced, which can trigger the feeding reduction response and increase ion exchange within the lungs.  The partial pressure within the venous blood can decrease and this, along with the chemical imbalance and feeding reduction, can trigger a “lethargic” response and even a “floating” response in the marine turtles.

Locally, it seems to be the sea turtles who are having the most problems. In south Florida, scientists have noticed the American Crocodile and the invasive pythons struggle with these cold temperatures but the wider ranged American Alligator and numerous species of native snakes do not.  The “locals” seem to alter their behavior to adjust for these extreme temperature drops – a method that the tropical species are not practicing.  It is known that certain native freshwater turtles over winter in frozen ponds, and diamondback terrapins are known to “hunker down” in muddy bottoms of salt marsh creeks when water temperatures drop below 59°F.

With sea turtles, the larger migratory individuals offshore are still moving at 43°F but is the smaller inshore juveniles that are the subject of stunning events. The water temperatures change more rapidly in shallower water and at 43°F, these smaller sea turtles become lethargic and float – which increases their chance of predation.  Data suggest that Green Sea Turtles begin to slow activity and Kemps Ridleys become more agitated when water temperatures drop below 68°F, both become dormant, reduce feeding and breathing when they drop below 59°F.  It is believed the real problems from being cold stunned are from the reduction of food as much, if not more than, the actual temperature itself.  The “cold bloods” bask to increase their body temperatures so that they can actually digest their food.

It is a problem frequently encountered along the American east coast but not as much in Florida. However, this year has been different.  The staff and volunteers from government agencies and local aquaria have done a champion job rescuing and rehabilitating many of these animals.