As we begin our wildlife series for 2019, we will start with a snake that almost everyone has encountered but knows little about – the southern black racer. 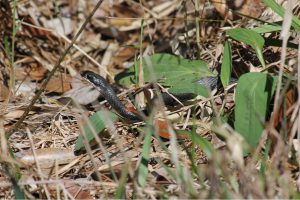 This snake is common for many reasons.

The southern black racer (Coluber constrictor priapus) is one of eight subspecies of this snake found in the United States.  This local variety is a beautiful shiny black.  The shine is due to the fact that they have smooth, rather than keeled, scales.  It is a long snake, reaching up to six feet, but very thin – and very fast!  Most of us see it just before it darts away.

They are sometimes confused with the cottonmouth. It can be distinguished in having a long “thin” body, as compared to the cottonmouths shorter “thick” body.  It has a brilliant white chin and the top of the head is solid black.  Cottonmouths can be mottled, usually have a cream-colored chin with a dark “mask” extending from the lower point of the chin through the eye.  Cottonmouths also have the wide delta shaped head compared the finger-shaped head of the racer.  They are also confused with the eastern indigo snake.  The indigo is very long (up to eight feet) large bodied snake, and the lower chin is a reddish-orange color.  The coachwhip is a close cousin of the racer, found in many of the same habitats.  It has a similar body shape, and speed, but is a light tan color with a dark brown-black head and neck. 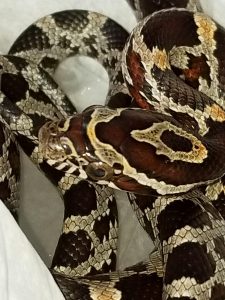 The juvenile black racer looks more like a corn snake, and is sometimes confused with a pygmy rattler.
Photo: C. Kelly

The juvenile looks nothing like the adult.  The young racers hatch from rough covered eggs laid in late winter and early spring.  They typically lay between 6-20 eggs and hide them under rocks, boards, bark, and even in openings in the side of homes.  In late spring and early summer, they hatch.  Their body resembles adults, but their coloration is a mottled mix of grays, browns, and reds – having distinct patches on their backs.  This helps with camouflage but often they are mistaken for pygmy rattlesnakes and are killed.

They are great climbers and are found in our shrubs and trees, as well as on our houses and in our garages.  Though sometimes confused with the cottonmouth, this snake is non-venomous and harmless.  Harmless in the sense that a bite from will cause no harm – but it will bite.  Black racers are notorious for this.  If approached, it generally freezes first – to avoid detection.  If it believes it has been detected, it will flee at amazing speeds.  If it cannot flee, it will turn and bite… repeatedly.  Again, the bites are harmless, but could draw blood.  Cleaning with soap and water is all you need.

They are opportunistic feeders hunting a variety of prey including small mammals, reptiles, birds, insects, and eggs.  They also hunt snakes, including small venomous species.  Unlike the larger venomous snakes, black racers stalk their prey – many times with their heads raised similar to cobras.  When prey is detected, they spring on them with lighting speed.  Despite the scientific name “constrictor”, they do not constrict their prey, rather pin it down and wait for it to suffocate.

They do have their predators, particularly hawks.  When approached they will first freeze to avoid detection, they may release a foul-smelling musk as a warning, and sometimes will vibrate their tails.  In leaf-litter, this can sound very similar to a rattlesnake – not helping with the juvenile identification confusion.  One paper reported finding a dead great horned owl with a black racer in its talons.  Apparently, the owl grabbed the snake too far back.  It killed the snake but not before the snake was able to strangle the owl.

They are hibernating this time of year but will soon be laying another clutch of eggs and we will once again encounter this most common of snakes.