This time of year in Northwest Florida, deer hunters are busy talking about the rut!  What’s the rut, you might ask?  Simply put, it’s deer breeding season.  Deer hunters speculate on peak rut times each year.  There are even peak rut forecasts.  Why are hunters interested in deer rut?  Hunters know that bucks are more active and careless during the rut. 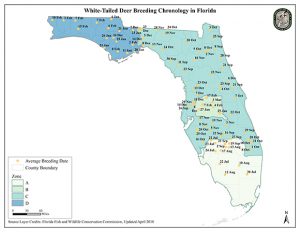 Bucks exhibit four rut behaviors: sparring, rubbing, scraping, and chasing.  Sparring happens between bucks to establish dominance.  This happens during the pre-rut.  Dominant bucks are generally the ones who get the does.  Bucks also make rubs on trees during the pre-rut period.  They start this behavior to remove velvet from their antlers.  They continue rubbing to mark their territory with their scent.  Scraping is another way they mark their area.  A scrape normally occurs under a low hanging branch.  The buck will lick or chew on the branch while scraping the ground as well as urinating on the ground.  The last rut behavior is chasing does.  Does typically won’t be game for this unless they are ready to breed.

In other parts of the country, the rut is long over.  Even in other parts of Florida, it is over.  Florida has more variability in rut timing than in any other state.  In Florida, deer rut starts in July in the southern part of the state and runs through February in the north.  Deer breeding dates are more predictable in the northern U.S. where winters are too harsh for fawn survival.  Deer breeding in our state is more variable because of our mild winters. Average breeding dates in Northwest Florida are very late compared to other parts of the country and the state.  Our average breeding dates generally range from December to mid-February.  Gestation takes about 200 days, so this puts fawning dates in late June through early September.

Even though we have average breeding dates for our area, these aren’t “magical dates”.  Not all does go into estrus on the same day or even the same week. 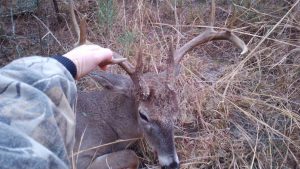 Estrus only lasts 24 hours and not all does become pregnant during the first estrus period.  This means that about 28 days later does go into a second estrus.  So the rut period is a range around the average date.

So, to all my fellow hunters in Northwest Florida, enjoy the 2019 rut!  I know I have enjoyed watching several bucks chase does as well as having the opportunity to take the biggest buck of my life this January.  Good luck to you all in your hunting ventures!

More information about the Florida Fish and Wildlife Commission Deer Breeding Chronology Study can be found at https://myfwc.com/hunting/deer/.