When our family has a big decision to make, they usually ask me to list pros and cons before we make such a decision, it is something I have done since I can remember.  It is not that different from the seven-year rule.  When faced with a big decision, some native American cultures discuss how this decision will impact their families and the community seven years down the road. 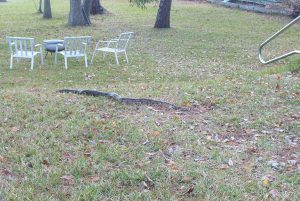 When I first saw the new Florida Fish and Wildlife Conservation Commission’s prohibited exotic species list, I thought of this pro-con / seven-year rule idea.  For example, the Meerkat is on the list.  A meerkat.  Is this a good pet to start off with?  Are they easy to maintain?  To feed?  Are they pets (as in… can you PET them)?

As I thought through my pro/con-seven-year idea, I thought not – but others obviously do.  There are a lot of strange exotic pets in the United States and around the world.  A species of turtle that I monitor is a pet trade target.  The largest markets are China and the United States.  I am guessing status is one reason why people chose pro over con.  Maybe they do not think of the cons before making this decision, or maybe the pros are more important to them, so they are willing to overcome the cons – I am not sure.

Either way, FWC’s decision to prohibit this new list of species is not because they might make bad pets, rather it is their high risk of becoming invasive.  Florida knows all too well how many of these exotic pets become problems in our local ecosystems.  Lionfish, pythons, tegus to name a few.  By definition, invasive species cause either environmental or economic problems for the communities where they become established – sometimes both.  In 2014, the United States spent over 180 million dollars battling invasive species.  We just completed our first statewide Weed Wrangle Event where volunteers went into the community and removed as many invasive plants as they could on a single day.  The statewide numbers are not out yet, but locally the Six Rivers CISMA spent the morning removing Chinese Privet, Camphor trees, and Japanese Climbing Fern from a popular biking trail in a state park.  And we all know, we will have to do it again. 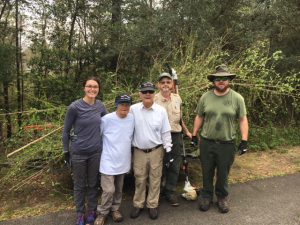 A group of volunteers from the Florida Park Service and Americorp helped to remove invasive plants during a recent Weed Wrangle event.
Photo: Rick O’Connor

Some say that spending time and money trying to control these invasive is a waste.  Others know that not doing so could lead to a serious environmental or economic problem – so the weeds must be pulled, and the animals captured.  All scientists and resource managers who deal with invasive species understand their best chance of eradicating them is when they FIRST appear on the scene – Early Detection, Rapid Response (EDRR).  This is also the most cost-effective point in the invasion to work on them.  However, most citizens do not know about certain invasive species until they are common in the landscape, and many times it is now too late for eradication – time to go into control mode.

One local species we hope we have begun working on soon enough to eradicate is Beach Vitex (Vitex rotundifolia).  This plant is not that common statewide and is a potential target for eradication.  Many along our barrier islands know of the plant now and, hopefully, will manage it on their property before it becomes widespread and problematic.

It was in this light that the FWC decided to approve a rule that would prohibit selected exotic animals as pets in Florida.  These were considered high risk for becoming invasive if they were to escape or were released.  This includes:

It is the hope that through this rule it will be harder to obtain these animals as pets and possible release into Florida’s landscapes.  It is also a hope that people will reconsider having such creatures as pets in the first place.  The pro-con / seven-year plan should be considered before buying any pet, particularly exotic ones.

To learn more about local invasive species and what you can do to help manage them on your property, you can visit the FWC page https://myfwc.com/wildlifehabitats/nonnatives/, or contact your county extension office.