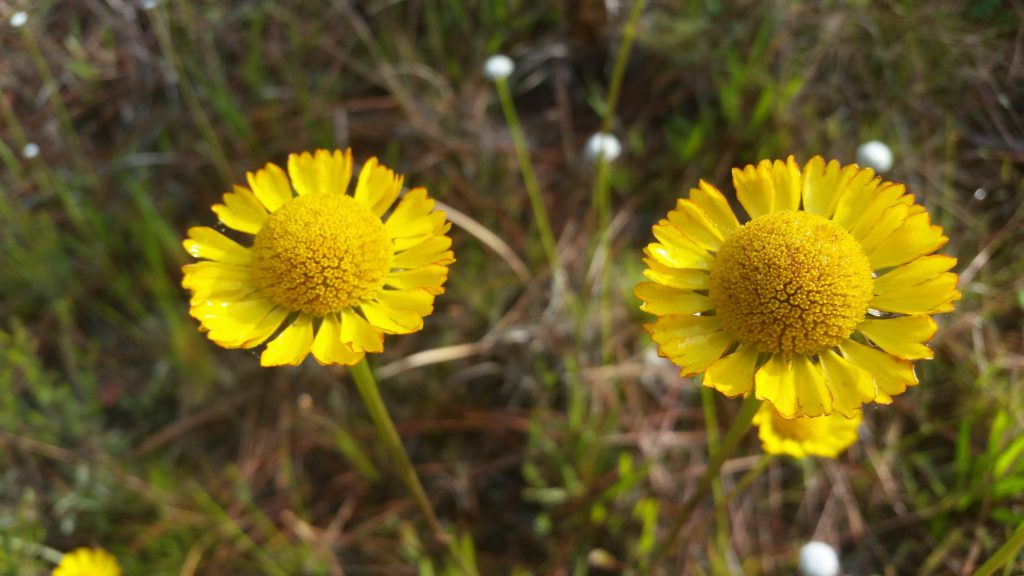 Yellow asters such as sneezeweed bloom profusely during summertime in the flatwoods.

Our coastal habitats are some of the most beautiful on the planet. Where else can you have the breathtaking, wide open vistas of our salt marshes, the incredible productivity of our nearshore bays, and the expansive pinelands in the adjacent uplands. Year-round opportunities abound to be outside and enjoy the natural resources we are blessed with. Just go prepared for the inevitable encounter with some of our bloodsucking flies and midges that are part of the package deal. A pair of binoculars, snacks, water and proper clothing provide the makings of a great day out, but I would also recommend a picture-taking device of some sort. I’ve basically given up on the heavier camera gear and the notion of getting long-distance close-ups. I now rely on my cell phone or a small digital camera; mainly for taking photos of flowers, bugs, and anything else that doesn’t require stealth and patience to shoot.

One of the best habitats to explore during this time of year for capturing memorable images is the upland pine flatwoods that is so abundant in the Florida Panhandle. There is no shortage of public lands that display some of the most well-managed pineland landscapes in the nation. Pineland ecosystems in the Southeast have been intimately linked with a natural fire regime, long before Europeans came on the scene. Successional cycles of increasing shrubby growth over time and the ability of the landscape to carry a fire after a lightning strike, have allowed these areas to develop with the “park-like” vista of a pine tree savanna in many cases. When fire is excluded by people, these ecosystems gradually convert to more hardwood species that tend to shade-out herbaceous growth on the ground and reduce the opportunity for new pine seedlings to become established. Professional land managers who work hard to mimic natural fire cycles on the lands they manage produce some astounding results. I can attest, as many of the areas where I hunt turkeys each spring are chosen more for the beauty of the landscape than the abundance of gobblers. Although fewer gobblers is not typically the ideal hunting scenario, the silver lining comes in the form of less competition with other hunters.

This spring I hunted in part of the St. Marks National Wildlife Refuge and had a nice mix of fairly recently burned pinelands to explore. Some were burned this spring, and was just starting to green-up with newly emerging grasses and forbs. Other areas were burned a year or two ago and you would never know it except for the charred bark on tree trunks. These areas recover to full greenery in a very short time. The foot-high wild blueberry bushes were loaded with green berries for summer wildlife feasts to come, and the photo opportunities for wildflowers abounded. Fire is so important in retaining a high species diversity in these habitats. Opening up the canopy allows sunlight to filter through to the forest floor and the recycling of nutrients in the ash supports many unique plants. There are several terrestrial orchids that bloom in the wetter soils (grass pink, colic root, lady’s tresses, etc.), and yellow flowers are prolific right now (St. John’s wort, sneeze weed, candy root and many more). I even saw some parrot pitcher plants in one wet spot, noticeable mainly by their tall maroon flowers. Fetterbush and staggerbush are also blooming with small flowers that look similar to blueberry blooms. The difference in scent of these two Lyonia shrubs is an easy way to tell them apart with fetterbush having a strong musky (not totally unpleasant) smell, while staggerbush (rusty Lyonia) has one of the sweetest, most pleasant smells of spring in the flatwoods.

So, while I did have the opportunity to chase around a gobbler this spring (who easily out-maneuvered me), I truly enjoyed my week of annual leave spent reconnecting with something that we too often take for granted. Take time to locate the state parks, national wildlife refuges, state forests and other public lands in your region. Then go outside. I mean it; none of us should miss the chance of a lifetime to see what we really have here. 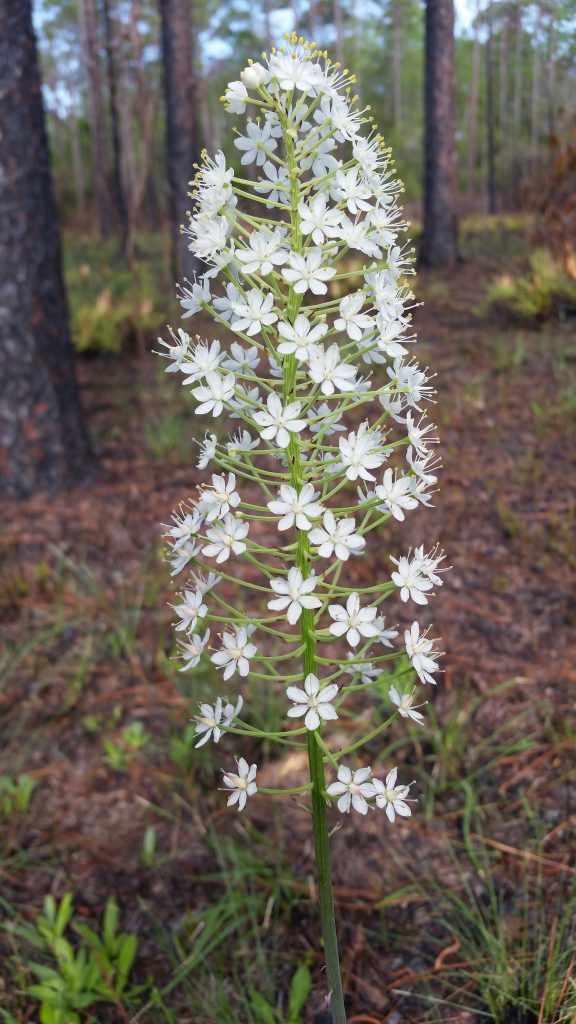 Crow poison, also know as Osceola’s plume shows up in wet flatwoods, most noticeably after a fire.