Bioluminescence: Light Show Beneath the Sea

If you like summer fireworks events, there is a great show ongoing during our warm summer months that you shouldn’t miss. Find an unlit dock along our coastal environs and take the time to pause, get down on your knees, and gaze into the starry… water. Our night skies are quite impressive in their own right, but our night waters will also put on an amazing show of glowing critters and flashing lights if you take the time to notice. Thousands of different marine organisms have the ability to produce light and the purposes served by this trait are many. Some animals use this tactic as camouflage and others to stand out for one reason or another. Being seen by others can assist with predation (luring), defense (startling or warning), or even reproduction (attracting a mate). 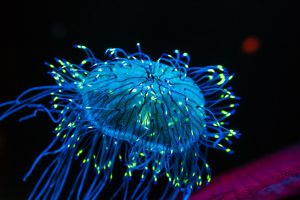 Thousands of marine creatures create their own light, including many jelllyfish

Bioluminescence is the most accurate term for light emitted by living organisms; although sometimes you will hear it referred to as fluorescence or phosphorescence. Fluorescence however, is the term describing something that absorbs light energy from an external source and then almost immediately re-emits it. When the external source goes away, so does the fluorescence; i.e. it doesn’t keep going in the dark. Phosphorescence describes when something absorbs light energy from an external source and then slowly re-emits it over a longer timeframe, i.e. glowing stickers. In contrast to these other terms, bioluminescence results from a chemical reaction within the body of an organism. The trigger mechanisms can be quite varied in nature and some are even directly controlled by linkages with an animal’s brain and nervous system. Other times the light is triggered simply by a physical disturbance. This is the most common phenomenon observed by people as the water seems to sparkle from a boat’s wake at night or waves breaking in the surf. One of my earliest memories of this was as a teenager in the Keys while wading along the shore at night. Each splash would trigger a shower of sparks.

So, what is taking place to create this chemical reaction that gives off light? Well, scientists have learned a lot about it but still don’t have all of the answers regarding the incredible variety of ingredients and processes involved in the bioluminescent realm. In general, a molecule called luciferin is involved and when exposed to oxygen, it gives off light. An enzyme named luciferase acts as a catalyst to help speed up the reaction. There are apparently many types of luciferins utilized by different animals; and I’m guessing, many variations on the actual luciferases involved too.

During summertime the warm waters of the Gulf and our coastal estuaries are rich with planktonic life. If you look close at a dock post beneath the water you will see continual, tiny flashes being triggered as water moves around the stationary post. When you walk down the dock (very carefully, without a flashlight), you can also see streaks of light from startled fish swimming away. This light is emitted by single-celled dinoflagellates that are triggered by a disturbance near them. One fascinating account I’ve read, told the story of Jim Lovell (Apollo 13 astronaut), who used bioluminescence to find his way safely home. When the navigation equipment failed at night in the navy plane he was flying, he was able to turn off his cockpit lights and see the glowing wake from his carrier and follow it. I’m sure he was forever grateful to the tiny marine creatures that made this possible! If you can get to a coastal dock near you this summer, be sure to turn out the lights, and look down in the water for a spectacular, miniature fireworks show. No earplugs required.