But there could be reason to keep an eye out.  We are not talking about the common ribbed or hooked mussels we found in the Pensacola Bay area.  We are talking about an invasive species called the green mussel (Perna viridis). 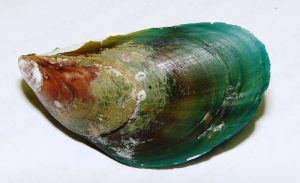 The green mussel differs from the local species by having a smooth shell and the green margin.
Photo: Maia McGuire Florida Sea Grant

By nature, invasive species can be environmentally and/or economically problematic.  In this case, it is more economic – which is unusual, most are more environmental concerns.  The big problem is as a fouling organism.  Like zebra mussels (Dreissena polymorpha), green mussels grow in dense clusters, covering intact screens to power plants, intact pipes to water plants, and can displace native spaces by competing for space.  It has been determined they can grow to densities of 9600 mussels / m2 (that’s about 10 ft2) and they can do this on local oyster reefs – displacing native, and economically important, oysters.  They grow quickly, being sexually mature in just a few months, and disperse their larva via the currents.  To make things more interesting, they may be host to diseases that could impact oyster health.

So, what is the situation?

They are from the Indo-Pacific region, found all across southeast Asia and into the Persian Gulf.  In this part of the world they are an aquaculture product.  There was interest in starting green mussel aquaculture in China, and in Trinidad-Tobago.  After they arrived in Trinidad, they were discovered in Venezuela, Jamaica, and Cuba – it is not believed this was due to re-locating aquaculture, but rather by larva dispersal across the sea… they got away. 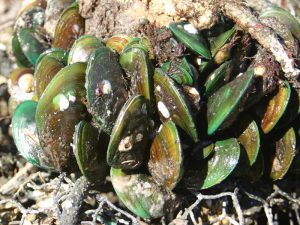 It would be an easy jump from Cuba to Florida – and they came.  The first record was in 1999 in Tampa Bay.  They were found while divers were cleaning an underwater intake screen.  Dispersal could have happened via larva transport in the currents, but it could have also occurred via ship ballast discharge at the port – this is how folks think it got there, they really do not know.  From there they began to spread across the peninsula part of the state.  They have been reported in 19 counties, most on the Gulf coast, and there is a record from Escambia County – however, that one was not confirmed.

How would I know one if I saw it?

They prefer shallow water and are often found in the intertidal zones – attached to pilings, seawalls, rocks.  As mentioned, they grow in dense clusters and should be easy to find.  They are long and smooth, with a mean length of 3.5 inches.  There was one found in Florida measuring 6.8 inches, which they believe is a world record.  Mussels differ from oysters in that they attach using “hairy” fibrous byssal threads – in lieu of cementing themselves as oysters do.  As mentioned, the shell is smooth and may have growth rings, but it lacks the “ribbed” pattern we see on the local ribbed and hooked mussel.  It will have a green coloration along the margin – hence its name, and the interior of the shell will be pearly white. 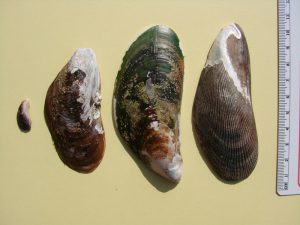 The shell at the far right is the common ribbed mussel native to our local salt marshes. Just to the left is the invasive green mussel. Can you tell them apart?
Photo: Maia McGuire Florida Sea Grant

They prefer salinities between 20-28‰, which would be the lower portions of the Pensacola Bay system (Santa Rosa Sound, Big Lagoon, maybe portions of Pensacola Bay).  They are not a fan of cold water.  They do not like to be in water at (or colder) than 60°F.  Some biologist believe it is too cold in the panhandle for these bivalves, but we should report any we think may be them – to be sure.

What do we do if found?

1)      Get a location and photos.  Pull some off and get up close photos of an individual.

3)      If there is a method of removing all of them, do so.  But this should be done only after the identification is verified.  When removing try to collect all the shell material.  The fertilized gametes within, if left, can still disperse the animal.

4)      They are suggesting boat owners check their vessels when trailering.  Avoid transporting them from one body of water to another.

5)      I would recommend that marina owners do the same – check boats and pilings.

It appears the mean temperature of the Gulf is increasing.  With this change it is possible some of the tropical species common in south Florida could disperse to our region, and that could include the green mussel.  The most effective (and cheapest) way to manage an invasive species is catch them early and remove them before they can become established.

For more information on green mussels in Florida read https://edis.ifas.ufl.edu/pdffiles/SG/SG09400.pdf.