Oh, What a Night – Sally Storms into the Panhandle

It began easy enough – a tropical storm making landfall between Louisiana and Mississippi.  Northwest Florida could expect some rain and rising water.  Okay… 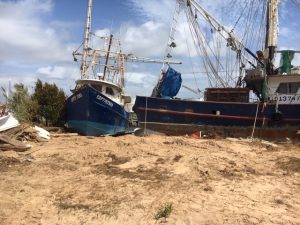 Shrimp boats from Allen Williams Seafood in Pensacola on shore. Most of the shrimp boats were.
Photo: Rick O’Connor

A few hours later the new landfall was predicted to be the Mississippi-Alabama coastline.  This changes things a bit.  We are expecting slightly higher winds, higher water, this will probably be a rain event.  Some school districts closed; others were waiting to see.  We already had our boat ready for Laura, which went further west than predicted, so we were ready.  Tropical storm winds were doable as long as we did not get a direct hit.  It was heading west of us.  We were along the outside edge of the “cone of uncertainty”. I think we are good.  Many others felt the same way.

Later, it was a sunny day and I was in a zoom meeting when my wife, a teacher, poked her head in and said they were closing schools through Wednesday.  What?  What is going on?  Closing school for two days for a tropical storms that is going in west of Mobile AL?  We should check out the weather channel.  We did… it was now heading for the Alabama-Florida line.  It was a strong tropical storm possible Category 1 hurricane.  Maximum winds would be near 90 mph.

We made a few more preparations.  We actually got some boards up when the rain began but could not get them all up (we have 23 windows in our house).  The sun set, the rain came harder, the wind picked up, and the weather service changed their forecast again – winds to increase to 110 mph – probably make landfall as a Category II storm.  They issued a hurricane warning for counties further east including Walton County.  The high winds and rain whipped Pensacola all through the night and much of the next day.  We were in the eye wall of a Category II storm.  No one was prepared for this. 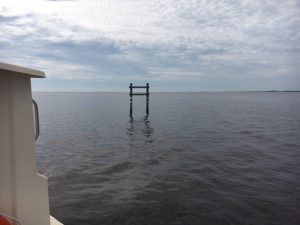 Several channel and day markers for navigation are damaged or missing. Mariners should be cautious.
Photo: Rick O’Connor

In the aftermath there was the typical hurricane damage.  Downed trees, some on houses, boats on the beach, flooded homes, and – like other storms – some properties that were barely touched, or untouched all together.  Power and water were out, and many roads were impassible.  Oh, what a night…

There was something different this time.  A company out of Virginia was building a new bridge over Pensacola Bay.  They had completed the south bound section, tore down the old bridge, and were working on the north bound section while the south bound was being used.  They had numerous barges anchored all over the bay full of work equipment, cranes, etc.  For what ever reason, they did not move these into one of the bayous.  The lines broke and many barges drifted.  Some landed along the shorelines, some hit the bridge – the southbound section of the bridge – and it is now closed.  This is part of Highway 98 from Pensacola to Gulf Breeze and used by hundreds of thousands of people each day.  It is closed and traffic access for many in the community has changed.  This is going to be tough.

But this newsletter is about natural resources… what about that? 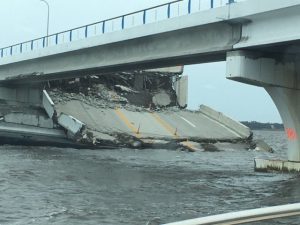 A section of the new 3 Mile Bridge over Pensacola Bay hangs down after being hit by one of the many barges adrift that night.
Photo: Rick O’Connor

As you might guess the water within the bay is a mess.  There were hundreds of vessels that sank.  You can see the fuel and oil slicks leaking from them on the surface of the water.  You can also see pelicans and gulls swimming on and in it.  There have been no reports of fish kills yet, but – to my knowledge – there has been no water sampling other than for bacteria.  We know there were several sanitary sewer overflows due to the high rainfall amounts – I recorded 20.4” over the two-day period at my house.  The water is a deep brown color and you can smell it in some locations.  Health advisories are currently issued for all bodies of water that the Department of Health sample.  No one should be in the water.

Along those same notes, no one should be boating at this time either.  During our boat assessments of the area waters we saw numerous objects – such as docks, day markers, road work markers, and more – drifting all over the bay.  Some floating, some slightly submerged.  We managed to bump a submerged tree in one of the bayous and also managed to get a large sheet of plastic wrapped around our props.  Boating is discouraged at this time.  We know some of the fishing charters (smaller vessels) are going to try and fish this weekend.  We understand this – they need the revenue – but we caution them to be on the look out for this debris. 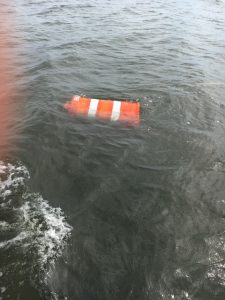 This highway work can was piece of thousands of pieces of debris floating in the bay. Mariners be cautious.
Photo: Rick O’Connor 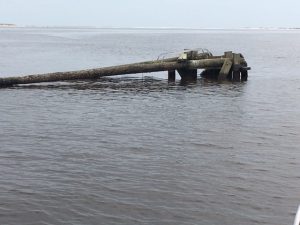 This drifting day marker ran aground on a shoal in the ICWW near Ft. Pickens. At the time of this photo, it was unmarked and had no light on it. Mariners be cautious.
Photo: Rick O’Connor

I have not been on the barrier islands, but photos show severe erosion on portions and there are three new inlets on the east end of Perdido Key, one of those we could see from our boat.  We have no idea what impacts this storm had on the wildlife but it fair to say that things have changed.  We alerted residents to be aware of snakes while doing clean up – we will alert them again.  I remember after Ivan the increase in the hawk activity due to downed and thinned trees – squirrels were now easier targets.  This has happened again.  There is one really large red-tailed hawk hanging around our house and doing quite well.

At the time of this writing, I have not contacted the local wildlife sanctuary, but I am guessing injured and orphaned animals will increase.  The wildlife sanctuary itself took on water, but almost all of the animals survived, and they are back at work. 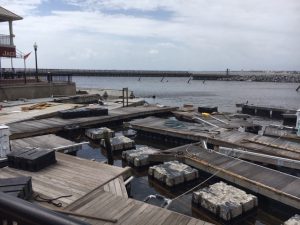 This marina, and many others, will be out of service for quite some time.
Photo: Rick O’Connor

So, from a natural resource stance – water is poor, do not swim – fish are not dying, but would hold off fishing inland – keep an eye out for wandering wildlife, such as snakes, that have been displaced.  We are expecting sick and injured birds due to oil slick and other debris issues.

There is one last lesson from Sally… be prepared.  We have become very comfortable with the forecast.  Northwest Florida was outside the “cone” for a tropical storm making landfall near Mississippi – and then.  As we all know these storms can change direction and intensify (remember Michael’s turn east) at a moments notice.  Any storm with name in the Gulf should be taken seriously, whether tropical storm or not.