Pretty Face with a Bad Attitude: The Invasive Chinese Tallow

The native Florida landscape definitely isn’t known for its fall foliage.  But as you might have noticed, there is one species that reliably turns shades of red, orange, yellow and sometimes purple, it also unfortunately happens to be one of the most significant pest plant species in North America, the highly invasive Chinese Tallow or Popcorn Tree (Triadica sebifera). 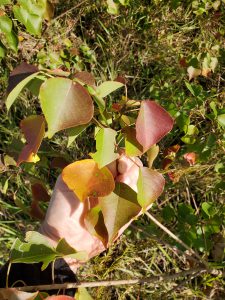 Native to temperate areas of China and introduced into the United States by Benjamin Franklin (yes, the Founding Father!) in 1776 for its seed oil potential and outstanding ornamental attributes, Chinese Tallow is indeed a pretty tree, possessing a tame smallish stature, attractive bark, excellent fall color and interesting white “popcorn” seeds.  In addition, Chinese Tallow’s climate preferences make it right at home in the Panhandle and throughout the Southeast.  It requires no fertilizer, is both drought and inundation tolerant, is both sun and shade tolerant, has no serious pests, produce seed preferred by wildlife (birds mostly) and is easy to propagate from seed (a mature

Chinese Tallow tree can produce up to 100,000 seeds annually!).  While these characteristics indeed make it an awesome landscape plant and explain it being passed around by early American colonists, they are also the very reasons that make the species is one of the most dangerous invasives – it can take over any site, anywhere.

While Chinese Tallow can become established almost anywhere, it prefers wet, swampy areas and waste sites.  In both settings, the species’ special adaptations allow it a competitive advantage over native species and enable it to eventually choke the native species out altogether.

In low-lying wetlands, Chinese Tallow’s ability to thrive in both extreme wet and droughty conditions enable it to grow more quickly than the native species that tend to flourish in either one period or the other.  In river swamps, cypress domes and other hardwood dominated areas, Chinese Tallow’s unique ability to easily grow in the densely shaded understory allows it to reach into the canopy and establish a foothold where other native hardwoods cannot.  It is not uncommon anymore to venture into mature swamps and cypress domes and see hundreds or thousands of Chinese Tallow seedlings taking over the forest understory and encroaching on larger native tree species.  Finally, in waste areas, i.e. areas that have been recently harvested of trees, where a building used to be, or even an abandoned field, Chinese Tallow, with its quick germinating, precocious nature, rapidly takes over and then spreads into adjacent woodlots and natural areas. 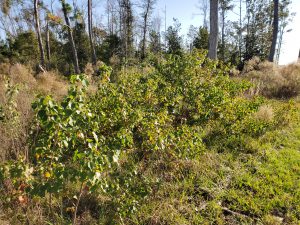 Hopefully, we’ve established that Chinese Tallow is a species that you don’t want on your property and has no place in either landscapes or natural areas.  The question now is, how does one control Chinese Tallow?

Despite its attractiveness, Chinese Tallow is an insidious invader that has no place in either landscapes or natural areas.  But with a little persistence and a quality control plan, you can rid your property of Chinese Tallow!  For more information about invasive plant management and other agricultural topics, please contact your local UF/IFAS Extension office!