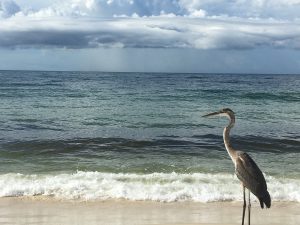 June is National Ocean Month.  Close your eyes and think about just how many oceans there are.  Surprise, there is only one!  The ocean is huge, covering over 70 percent of the earth’s surface.  Traditionally, the ocean was divided into four named ocean basins: the Pacific, Atlantic, Indian, and Arctic. However, most countries, including the United States, now recognize the Southern (Antarctic) as the fifth ocean. No matter where you live, you are connected to our one global ocean.

What do you know about our ocean? The ocean is where life began over 3.5 billion years ago. The ocean covers over 70% of the Earth’s surface and includes over 96% of the Earth’s water. Australia’s Great Barrier Reef is the largest living structure on Earth and can be seen from the moon! The deepest part of the ocean is in the Mariana Trench, and nearly 7 miles beneath the waves! Coral reefs cover only 1/50th of the ocean floor but about one quarter of all the marine species make coral reefs their home. No light penetrates the ocean at depths greater than 3,280 feet. Aided by deep diving rovers and remote sensing cameras, scientists are still discovering new species beneath the waves. The Gulf Stream transports more water than all the Earth’s rivers combined. The mid-ocean ridge crisscrosses the globe for over 40,000 miles and is the largest geological feature on Earth. Did you know that about 95% of the ocean remains unexplored?

What about our beloved Gulf of Mexico? Is it an ocean? No! While both oceans and gulfs are large bodies of saltwater, gulfs are smaller and are bordered on three sides by land.  In the case of the Gulf of Mexico, it’s bordered by the United States and Mexico. So, although it is large and salty like the ocean, the Gulf of Mexico is considered part of the Atlantic Ocean.