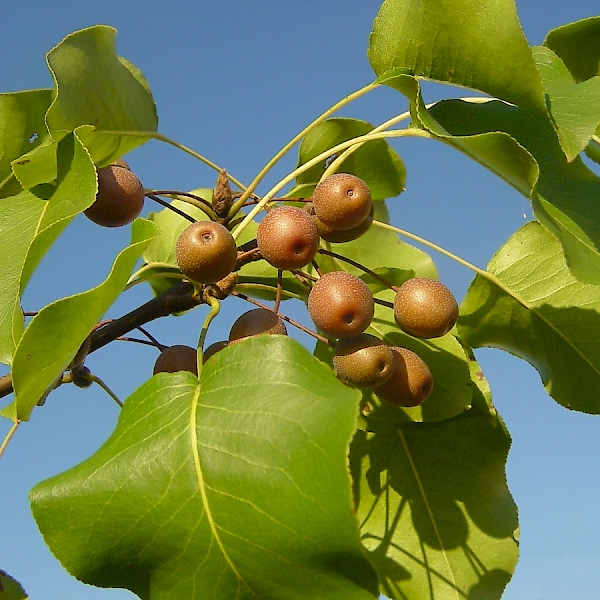 The Callery Pear was introduced to the United States in the early 1900s intentionally as an ornamental plant.  Its fruits were sterile because they do not self pollinate and spreading was not an issue.  New cultivars were produced to reduce the tendency of the tree to split when covered with snow, or in high winds.  The ‘Bradford’, and other cultivars, have hybridized with the Asian Pear (P. betulifolia) and produced fertile fruit that have spread into natural areas and become an ecological problem.

EDDMapS currently list 6,112 records of this plant spread across the United States.  1,837 are listed in the southeastern United States and 164 of those are in Florida.  All 164 are found within the Six Rivers CISMA in Santa Rosa and Okaloosa counties.  It is most likely under reported.

It is a tree that can reach 50 feet in height.  It grows very quickly and the branches are close together forming a dense round-ish canopy.  The leaves are glossy, simple, ovate in shape, serrated on the edges, and alternate on the branch.  It is a deciduous and will turn all sorts of colors in the fall.  It produces a beautiful white blossom tinged in pink.  It does produce an aroma that some find unpleasant.  The fruits are round, about 0.5-1.0” in diameter, and golden brown in color.  The bark is dark to light brown in color and very smooth to the touch.

The primary issue with the Bradford cultivar is the ecological problems it has caused in natural areas.  The University of Florida IFAS Assessment considers it a high risk as an invasive species.

Trees should be cut down and stumps treated with either glyphosate or triclopyr products.  Multiple treatments will be needed.