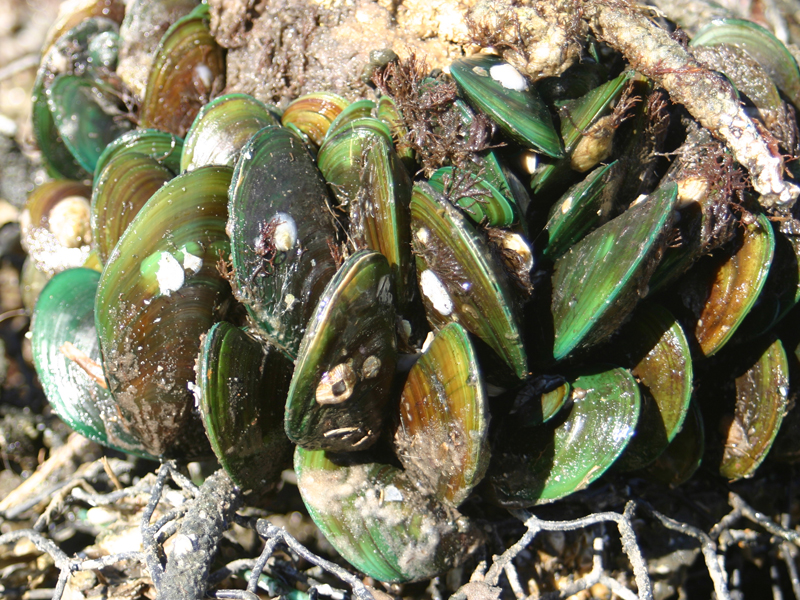 Green mussels are native to the Indo-Pacific region extending from India to Southeast Asia.

Green mussels have been cultivated as an aquaculture product and were introduced to other parts of the world as such.  They were first reported growing wild in the waters of the Caribbean in the 1990s reaching Venezuela by 1993.  The first report in Florida was in the Tampa Bay region in 1999.  They have been slowly dispersing south along Florida’s Gulf coast.  In 2003 they were found on the Atlantic coast near Crescent Beach and the Jacksonville-St. Augustine area.  That same year a few single specimens were collected off the coast of Georgia and by 2006 there were records in Charleston SC.  There are only a couple records from the Florida panhandle.  In 2008 a couple of specimens were reported in the Panama City area and one record in 2011 came from Perdido Key (this one may have been misidentified).

EDDMapS currently list 128 records of green mussels in the U.S. All 128 are from the state of Florida, though the USGS reports one from the state of Washington.  There is only one record within the Six Rivers CISMA (that from Pensacola Bay region).

Mussels are sessile bivalves attached to the substrate using thin byssal threads.  This is a large mussel, reaching lengths of 3-4” and some up to 6”.  Its shell is not ribbed like our native ribbed mussel often found in salt marshes, but rather smooth and possesses a brilliant emerald green color.  In larger/older individuals the green is found more on the margins of the shell with the rest taking on a brownish coloration.  The inside of the shell resembles our native mussel in having a bluish iridescent coloration.

The primary issue with green mussels is fouling.  Like zebra mussels, green mussels can foul boat bottoms, overgrow on marina pilings, and clog intake pipes for water treatment and power plant facilities.  They can clog crab traps, shellfish aquaculture bags, and will displace native species such as oysters – making oyster restoration projects harder.  There is evidence of predation by blue crab and sheepshead, but there does not seem to be enough predation to control populations where they are currently found.

First, check your boat hull and bilge water before trailering to another water body.  It is recommended that you scrap the hull and empty your bilge on land so as not to provide any live material entering the waterways.  Be sure you are removing at a location at the ramp where the animals, or even sections of the animals that may contain gametes, cannot reach the waterways during a rain event or other run-of situation.

Second, if found on a seawall or piling, use a paint scraper or flat shovel to remove from such.  You want to collect AS MUCH MATERIAL AS YOU CAN into a 5-gallon bucket and remove from the water system.  Again, any gamete material remaining could continue the population.  At this point you can allow them to dry out and then dispose of.

Third, if in intake pipes there are several methods to remove but many are expensive and options depend on the system that is fouled.  It is recommended that you contact your county extension office for advice.

In either case, it is important to report the record to EDDMapS – https://www.eddmaps.org/.