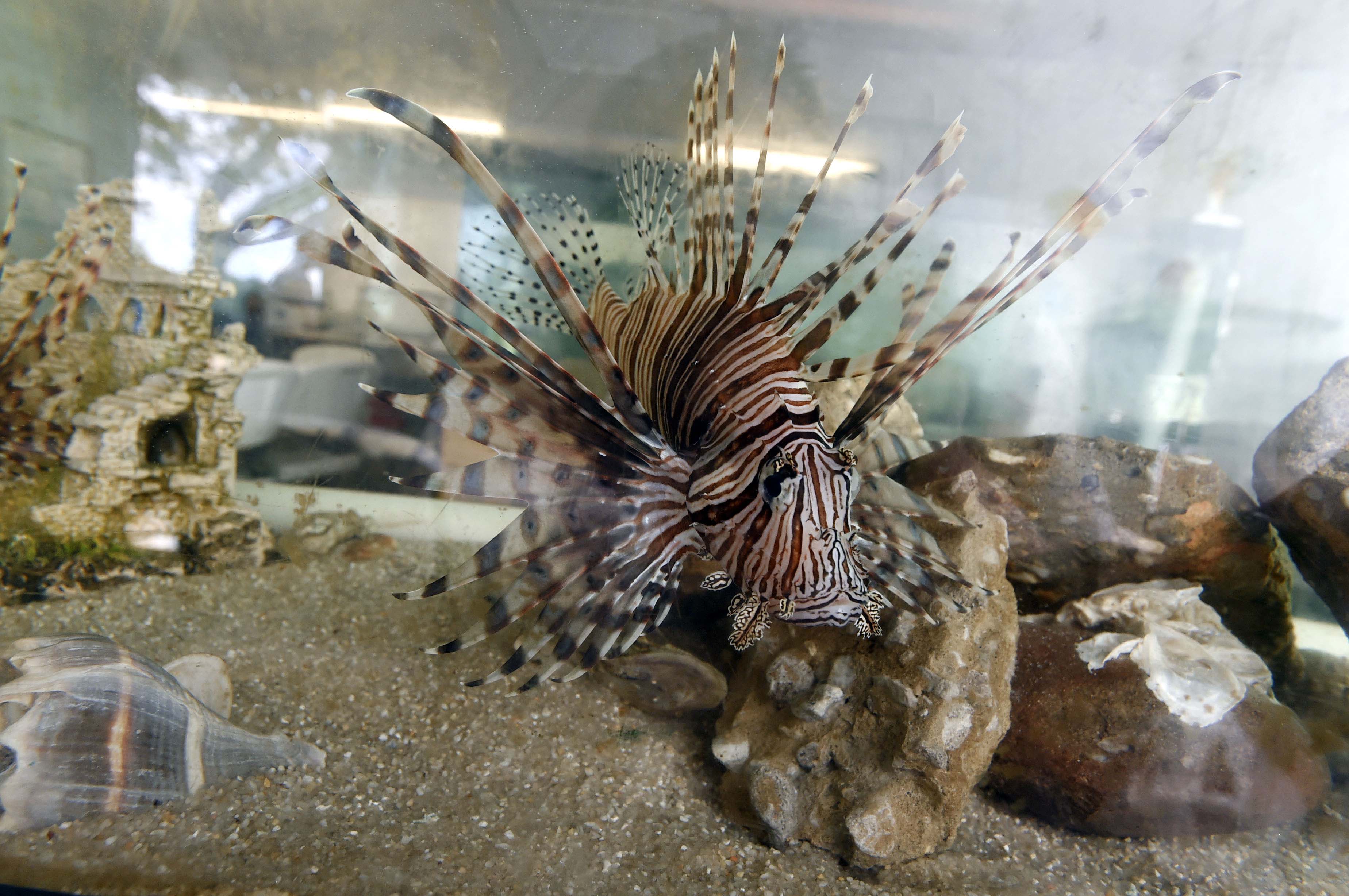 The Indo-Pacific and Red Sea.

The first record of lionfish in U.S. waters was in the late 1980s off the coast of Davie, Florida.  It is believed the release was connected to the aquarium trade but whether it was accidental or intentional is unknown.

EDDMapS currently list 3,029 records of lionfish in the U.S. This is certainly under reported.  Few invasive marine fish are reported to EDDMapS. Most are reported to a NOAA website which reports area of lionfish rather than individual records.  It is known that the lionfish is well established all along the eastern seaboard of the United States, Bermuda, the Caribbean, and the entire Gulf of Mexico – including the coastal areas of Six Rivers CISMA.  In 2014, it was reported that the densities of lionfish off the Six Rivers CISMA were some of the highest in the entire south Atlantic Region1.  At a regional workshop in 2018, it was reported these densities had declined in waters less than 200 feet2.

Lionfish are deep bodied fish with large dorsal and pectoral fins and a truncate caudal fin.  It is a slow swimmer.  The body has a white/maroon vertically striped pattern that includes the head.  The dorsal spines extend above tissue of the dorsal fin and possess a neurotoxin that is quite painful.  The enlarged pectoral fins resemble wings and are used by the fish to corral prey into corners.  There are no venomous spines on the pectoral fins but there are on the pelvic and anal ones.  Lionfish have a large gaping mouth that can swallow a variety of prey using an engulfing/vacuum method.

These are voracious predators and have been known to consume over 70 different species of small demersal reef fishes.  These small fish play an important ecological role on the reefs they inhabit, such as prey for larger commercially sought-after fish species as well as those that graze algae and keep the corals from being smothered by such.  The decline of these populations can have both ecological and economic impacts.  Studies have found that the popular red snapper will stay further away from reefs inhabited by lionfish, and they are also known to inhabit lobster traps in the Florida Keys, impeding the entry of the much sought-after spiny lobster.

The high reproductive rate has made lionfish management difficult.  Adult females are known to produce an average of 30,000 fertilized every four days.  The fertilized eggs are encased in a gelatinous sac that drifts with the currents and disperses the young to new territories.  There are toxins associated with this sac and consumption of larvae is not currently known.  In addition to high reproductive rates, the currents disperse the developing young great distances and lionfish are known to tolerate salinities found in estuaries.

They rarely bite hook and line making the most effective of removal being the diver with a pole spear.  There are very good lionfish hunters, and prize-winning tournaments are well attended, but studies have shown that removals using spear must be repeated about once a month to be effective.  Effective here meaning keeping the population stable, lionfish is a “Dirty Dozen” species, it will not be eradicated.

Test using traps are currently being conducted and these may prove to be more effective than removing by spear alone.  There are a few native species that have been known to consume lionfish, but not at a rate to impact their invasion.  Since 2018 lionfish in the south Atlantic region have been reported with skin lesions.  It is not known at this time how this will impact their numbers, but early studies suggest it is.