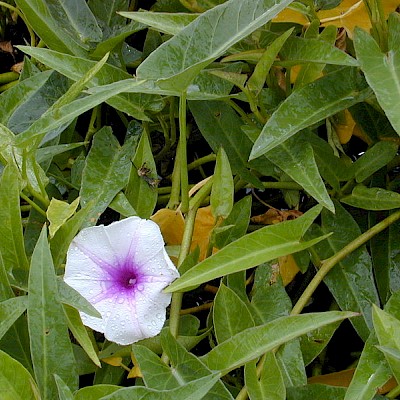 The plant was cultivated in many southeast Asian countries during World War II and was known as “water spinach”.  It was later brought to the U.S. and cultivated in California, Florida, Hawaii, Texas, and Arizona.  It escaped cultivation.

EDDMapS currently list 48 records of Swamp Morning Glory in the U.S.  Three are in northern California, one in Texas, and the remaining 44 are from Florida.  Two of those in Florida are from the panhandle in Walton County near Miramar Beach and are within the Six Rivers CISMA.

The plant appears as a trailing herbaceous vine in aquatic systems and produces a milky sap.  The leaves are alternate and simple.  The blades are arrowhead shaped but can vary.  They usually end in a point and are about 7 inches long.  They are held above the water most of the time.

The flowers are pretty and showy being funnel shaped.  They are white to pink in color.

This plant forms dense mats at the surface blocking needed sunlight to submerged species.  The vines can grow over 70 feet in length and can present problems with flood control.  It also competes with native emergent plants for space and resources.

Aquatic herbicides have been used but only with temporary relief.  Diuron provided satisfactory control on plants growing in dry ditches but was nonselective and killed other nearby plants.  Paraquat, glyphosate, and 2,4-D have been shown to have control over growth of the plant but are also nonselective and will kill other plants it comes in contact with.