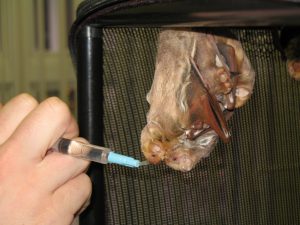 A wildlife biologist feeds an overwhelmed mother bat and her young after they were found on the ground. Photo credit: Carrie Stevenson, UF IFAS Extension

As we enter Halloween season, one of the most popular images of this spooky time of year is that of a bat.  The creepy tales of vampire bats and Dracula are enduring and certainly exciting. Unfortunately, many negative connotations exist around this fascinating species.  Perhaps you’ve heard they carry rabies, that they will fly into your hair, or that many of them are considered blood-sucking vampire bats?

In fact, there are many benefits to having bats in one’s landscape and neighborhood.  The predominant role of bats in our local ecosystem is that of insect predator.  A single little brown bat (Myotis lucifugis), which is native to the Florida Panhandle, can eat 1,200 mosquitoes in one hour of feeding!  Other species in warmer climates eat fruit and play a major role in reforesting rain forests in Central and South America—after digesting the fruit they leave seeds in their droppings (guano is excellent fertilizer, by the way), helping replant 95% of the very trees they feed upon.  Some species feed on nectar, filling the same role as bees and helping pollinate bananas, avocados, cashews, and figs. 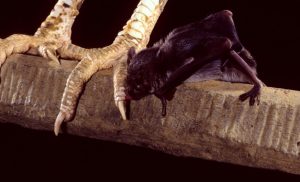 Contrary to popular opinion, vampire bats lap up blood from minor cuts on livestock and do not attack or kill them.

Despite the old saying, bats are not blind and many have excellent vision.  However, they do rely heavily on echolocation to sense prey and are extremely accurate hunters. They often fly erratically because they are chasing very small flying insects, so the only reason one would end up in a person’s hair is if a mosquito flew through it with a bat in chase!  While vampire bats do exist, there are only 3 out of over 1,000 species of bats that feed on blood, and they all live in Latin America.  They typically consume blood from livestock by breaking the skin with their teeth and lapping up blood like a cat drinking milk.

Human contact with bats is rare unless the bats are sick, which is why one found on the ground should be left alone.  Rabies transmission from bats accounts for only one death per year in the United States—a statistic much less than that of deaths from dog bites, bee stings, and lighting strikes!  In fact, several towns in Texas with the highest populations of bats in the country have recorded zero human bat-transmitted rabies cases. If a bat is obviously injured or has pups with it, most wildlife sanctuaries will take them in and give you special instruction on how to approach them. 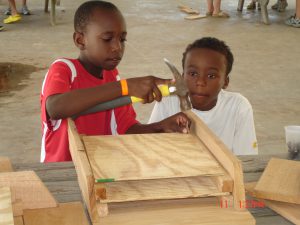 Bat populations are declining in North America due to disease (particularly white-nose syndrome), loss of habitat, and the slow reproductive cycle of bats.  However, you can help the world’s only flying mammal by installing a bat house in your yard.  Keep in mind that bats attracted to bat houses prefer to be in open areas away from trees (where their predators hide), and the house should be installed at least 12 feet in the air.  Bat houses can be purchased or built rather simply—keep an eye out for Extension workshops near you, or visit Bat Conservation International’s website for simple instructions.