Toadfish of the Florida Panhandle

This is a group of fish that few have heard of and many have not seen – or if they saw them, had NO idea what they were – but they a very common in our local waters… the toadfish.

Once you see one, you will know why they call it this.  Recently we had a matching game set up for the public to try and match the name of a common seagrass animal with its photograph.  The toadfish was one of 20 species on the board.  Few knew what it was and most only matched it with the photo through a process of elimination.  A common response was “well… this MUST be the toadfish”, though there were just as many who did not see the connection between the name and the look on this fish’s face.

All that said, they are very common here.  Snorkeling in our bays I have found them hiding in burrows within the grassbeds, snug against a seawall, and in open spaces within a rock jetty.  They are known to hide inside discarded cans and bottles, feeding and eventually growing to large to be able to leave!

They are known for their painful bites; I have personally experienced this.  We have captured them when seining the grassbeds.  Trying to remove them from the net they are very slimy and difficult to grab.  If you get close to their mouth, they will use the teeth they have.  Others have been bitten when exploring the inside of a can or bottle left on the bottom.   Toadfish belong to the family Batrachoididae and some members of this family are highly venomous.  However, of the three species found in the northern Gulf, only the midshipman (Porichthys porosissimus) possess venom, and it is not harmful to humans.

I guess in a word you could say these are ugly fish – hence their name.  They are all benthic and remain on the bottom at all times.  Most of the swimming they do is to a new hiding place, where they ambush their prey.  There are three species found in the northern Gulf of Mexico.

The Atlantic Midshipman (Porichthys porosissimus) is a light tan colored fish with dark brown blotches along its side.  Because of their light color, they are more common on light colored sand.  The ones I have found are on the nearshore bottom of the Gulf side of our barrier island.  They posses rows of photophores, cells that can produce light, and these rows of photophores resemble the rows of bright buttons on the 19th century midshipman’s naval uniform – hence their name.  This fish has a mean length of eight inches.  The midshipman has a more extensive range than the typical “Carolina” Gulf fish.  They can be found from Virginia all the way to Argentina; beyond the Brazil limit most “Carolina” fish have.  Though not reported on the other side of the Atlantic, nor the Pacific, this species seems to have few barriers impeding its dispersal. 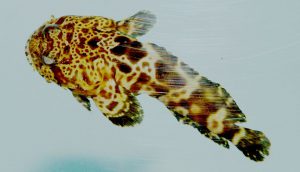 The Leopard Toadfish (Opsanus pardus) is a larger toadfish reaching 12 inches.  They too have a light-colored body with dark markings.  It prefers reefs and rocky areas offshore.  The only ones I have seen, or captured, were on our artificial reefs.  It was noted early on in the lionfish invasion, that lionfish were not as numerous on reefs where leopard toadfish existed.  This spawned a hypothesis that leopard toadfish may actually consume lionfish.  A small study conducted at a local high school marine science program found that was not the case.  I am not aware of any further studies on the relationship between these two, but it could be they just compete for space and the leopard toadfish wins some of these.  Though not reported from Argentina, this species does have a large range – including the entire U.S. Atlantic seaboard, the entire Gulf of Mexico, and much of the Caribbean.  Again, few barriers to their dispersal. 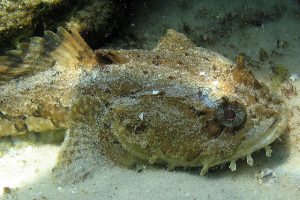 The most frequently encountered toadfish is the Gulf Toadfish (Opsanus beta) – also know as the oyster dog, dogfish, or mudfish.  This is the largest of the native toadfish at 15 inches.  It is most common inside our estuaries living on oyster reefs, burrows in seagrass beds, jetties, and any sunken debris such as pipes, concrete, or pilings.  Because of its habitat choice, this toadfish is much darker in color, having some light bars or markings on its side.  This is the species that is sometimes found in sunken bottles and cans.  This is a Gulf species found throughout the Gulf of Mexico, and some portions of the West Indies, but absent from most of the Caribbean and the Atlantic coast where it is replaced by its close cousin Opsanus tau.  There does seem to be a barrier near the Florida straits that impedes its dispersal east and north of the Gulf.  There are two species on each side suggesting a long period of isolation from each other and no interbreeding.  Again, there is a barrier there.

I am not sure whether you have seen any of the local toadfish while snorkeling or diving.  They are occasionally caught on rod and reel, but not often.  However, now that you know about them, I am sure you will see one while out on the waters.