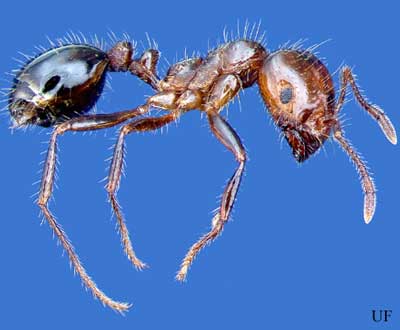 The red fire ant is a native of central South America.

It is believed the first red fire ants entered the U.S. from Brazil into either Mobile AL or Pensacola FL between 1933 and 1945 via ship.  As of 2008 they had been reported in 16 states stretching from the east to the west coast, albeit mostly southern states.

EDDMapS currently list 799 records of red fire ants in the U.S.  This is certainly well under reported.  Most of these are from the southeastern United States (including Texas) and three records from the Washington/Oregon area.  There are only 15 records from Florida, 6 from the panhandle, and no records within the Six Rivers CISMA.  Again, this is significantly underreported to EDDMapS.  It is a well-known species in our area.

The body of the red imported fire ant is red brown in color with a black gaster (tail).  The thin/skinny “waist” has two segments.  The mounds are usually of soil and, if disturbed, aggressively defended by the colony.  They like well-manicured lawns and in Florida’s sandy soils, may not form the large mounds found in clay-based soils.  They differ from the native fire ant (Solenopsis geminate) in that workers of the native species have enlarged square heads – not found in the invasive red imported fire ant.

The red imported fire ant has become a pest for agriculture and urban communities alike.  They can cause both medical and environmental harm.

In agriculture the ant is known to infest soybean fields.  Large infestations can lower crop yield, and some states report large infestations impacting the ability to use combines for harvest, reducing yield.  One paper reported $156 million in losses with the soybean industry.  The ants will feed on the young developing plants of not only soybean but okra, cabbage, citrus, corn, bean, cucumber, eggplant, potato, sweet potato, peanut, sorghum, and sunflower crops.  They are also a pest for livestock.

In urban communities they will nest almost anywhere including sidewalks, lawns, driveways, mailboxes, along the sides of homes.  During heavy rains they will seek higher ground sometimes entering houses and forming floating mats of live ants that have been problems after storm events.  The sting is quite painful.  Ants will both bite with their mandibles and inject a venom with a spine on their gaster.  The venom is an alkaloid mixture that exhibits potent necrotoxic activity (destroys tissue).  The reactions to fire ant stings vary depending on the individual from mild pain to anaphylactic shock.  The actual medical cost from the fire ant invasion is unknown.  Not only do they sting humans, but pets as well.  Fire ants have been found in electrical systems and have caused short circuiting.

These ants have had an impact on native wildlife as well.  Ground nesting birds and rodents will cease in areas where the ants colonize, and it is known that they have impacted the protected gopher tortoise populations.

Some suggest that only 20% of a colony is feeding at any one time and that many insecticides are not as effective.  The timing of the control is important.  Comprehensive fire ant management information can be found in the Extension publication, Managing Imported Fire Ants in Urban Areas.

Most of the broadcast sprays involve baits or dust products.  They can be effective but are often sprayed in locations where the ants cannot find them or become inactive by the time they do.

Biological controls using native predators must be tested to assure they do not have a negative impact on the native flora and fauna.  Two potential biological controls, a protozoan and a fungus, are currently being tested along with others.

Phorid flies (which are parasites on fire ants) have been released in the southeast U.S. by the USDA.  These colonies of flies have expanded beyond the area where they were released.

Home remedies including club soda, grits, soap, wood ashes, and shoveling mounds together have shown to be ineffective.