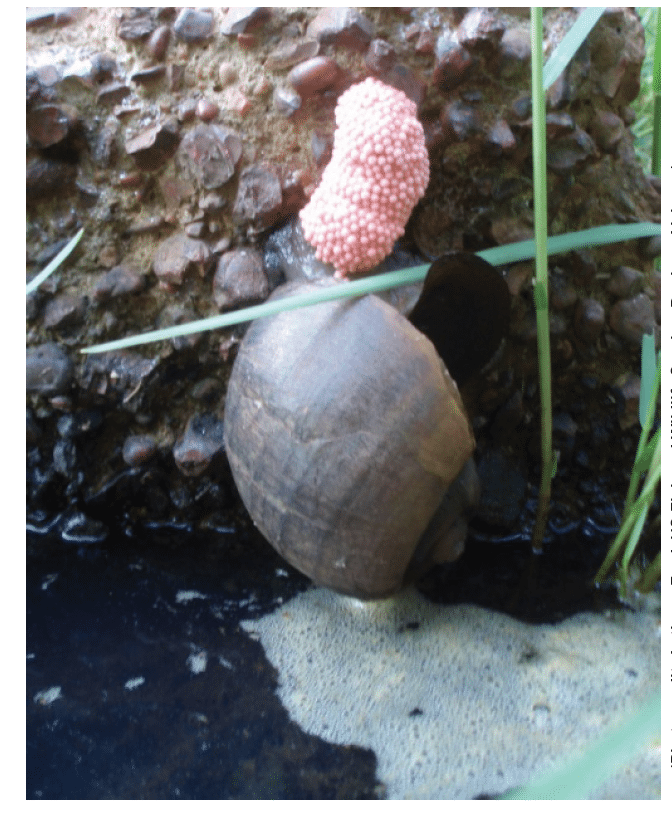 There are four species of apple snails in Florida.  One, the Florida Apple snail (Pomacea paludosa) is native to the state – thus not invasive.

The island apple snail (P. maculata) is from South America and has been problematic.

The spiked-topped apple snail (P. diffusa) is from Brazil and has not been reported to have caused problems.

The channeled apple snail (P. canaliculata) is from South American and has been very problematic for farmers.  It is considered one of the top 100 invasive species problems in the U.S.

There are records of some species being introduced as early as the 1950s as part of the pet trade – particularly for aquariums.

EDDMapS currently list 971 records of all apple snail species.  The distribution map indicates they are concentrated in the southeastern United States, though some report the channeled apple snail in Hawaii and California.  30 of those records are in the Florida panhandle and 1 within the Six Rivers CISMA.

There are 579 records of the island apple snail.  All are from the Florida, 62 from the panhandle, and 1 from the Six Rivers CISMA.

There are 27 records of the highly invasive channeled apple snail.  All 27 are from Florida, 18 are from the Jacksonville area but there are two records from the panhandle, and both are from Panama City.

There are 24 records of the spiked-top apple snail.  All are from Florida, and all are from the peninsula part of the state.  There are no records in the panhandle.

There are 6 records of the Titian apple snail (P. haustrum).  All are from the Miami area.

THE ONLY SPECIES REPORTED IN SIX RIVERS IS THE ISLAND APPLE SNAIL – WHICH IS A PROBLEM ONE.

THERE ARE RECORDS OF THE CHANNELED APPLE SNAIL – ONE OF THE WORST INVASIVE SPECIES IN THE U.S. – IN THE PANAMA CITY AREA.

These are relatively large freshwater snails with round shells that are olive green or brown in color (some are yellow) and have a large aperture (opening) where the snail exposes itself from the shell.  The smallest (the native Florida apple snail) may be 2-3 inches in size, but the island apple snail can reach 5 inches.  They are not easy to tell apart.

The issue is the consumption of vegetation.  The native Florida apple snail feeds on epiphytes and periphyton that grow on the submerged, and emergent, aquatic plants of the Florida.  However, the invasive varieties (island and channeled) feed directly on the vegetation and can be quite destructive of native wetlands and agricultural crops.

There have been attempts to use chemicals to control the invasive varieties of the apple snails, but with little success.  Hand removal is best option now.  There are several native animals that have been know to prey on all varieties of apple snails and this has helped.  Apple snails attached their eggs to blades and leaves of aquatic and subaquatic plants above the water line.  You can scrape these eggs off into the water and they will die.  HOWEVER, THE INVASIVE APPLE SNAIL EGGS ARE PINK.  THE NATIVE EGGS ARE WHITE – SCRAP ONLY PINK APPLE SNAIL EGGS INTO THE WATER.

DO NOT DISCHARGE UNWANTED AQUARIUM PETS INTO LOCAL WATERWAYS.