A Sea of Christmas Lights

Most people would agree that this is one of the best times of the year.  Christmas brings great music, great cooking, great family gatherings, and… great lights.  The lighting of Christmas is one of the more beautiful parts of these celebrations and as I thought about Christmas and writing about nature I thought of those lights. 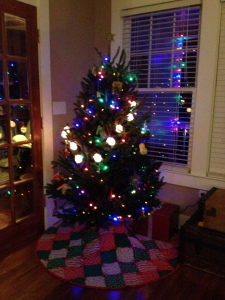 There is nothing like Christmas lights on a tree.
Photo: Molly O’Connor

Nature can produce beautiful lights as well.  Mostly found in the ocean – “phosphorus”, as many called it when I was growing up here, is a beautiful spectacle.  It is hard to see with our artificial lights but in the warmer months of summer at locations far from the artificial lights of people, the sea glows a blue-green color that is amazing.  Many see this light as sparkles in the water as the waves roll by.  Others see it as a stream of light as a fish, or something else, moves around.  In the right conditions, you can see your footprints glow as you step in the wet sand.  I remember diving at night under the Bob Sikes Bridge once in the 1970s when the bridge, and all of the divers, were aglow.  It was beautiful.  This phenomena have amazed scientists for centuries and trying to understand how it is produced was a quest for many.

The term phosphorescence actually means using light to emit light.  Turns out that is not what is happening in this case.  Scientists found that some creatures posses a group of molecules known as luciferins.  The term lucifer means “producing light” or “morning star” and seemed an appropriate name for this group of molecules.  When luciferin is oxidized, the transfer of an electron emits a “cool light” – usually blue-green in color.  Cool meaning that less than 20% of the emitted light is lost as heat.  There is a catalytic enzyme known as luciferase that can increase the speed of this chemical reaction and produce bright light in seconds.  Since this light is produced by a chemical reaction it was called “chemiluminescence”.  However, since this reaction is produced and controlled by living organisms is more widely known as “bioluminescence”.  It is not phosphorescence. 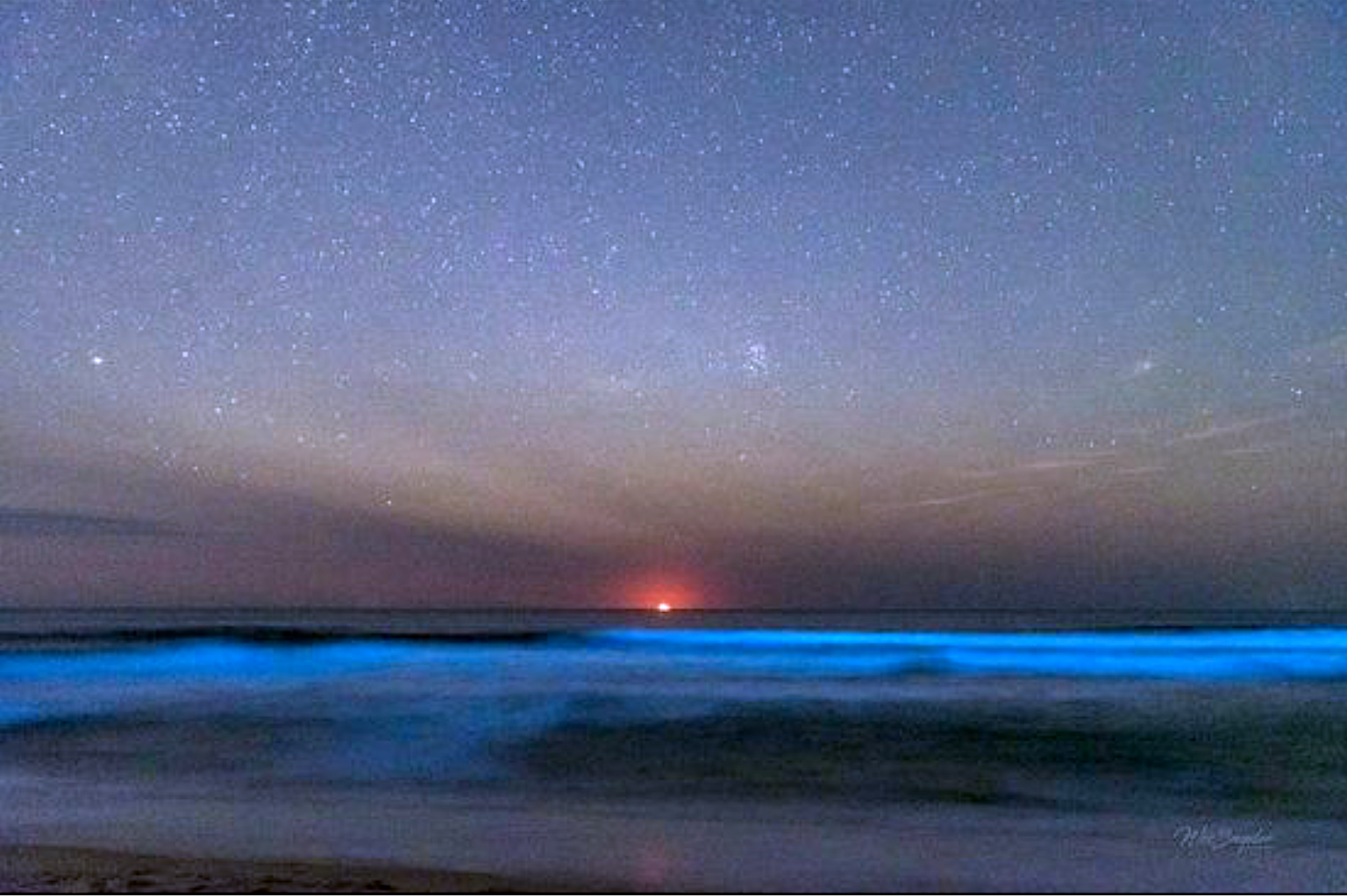 There are many creatures that produce bioluminescence.  The famous fireflies are one, but most live in the sea.  The “phosphorus” we are used to seeing is produced by small single celled plants in a group known as dinoflagellates.  When disturbed they emit blue-green light as a flash and then a slow dim.  Fish swimming past, waves crashing on the beach, or boat and propeller pushing through the water will disturb them.  The warmer the sea, the more dinoflagellates there are, the more amazing the light show is.  There are lagoons in the tropical parts of the world where these small plants are trapped due to a small opening in and out of the lagoon.  The entire lagoon can light up when the conditions are right. 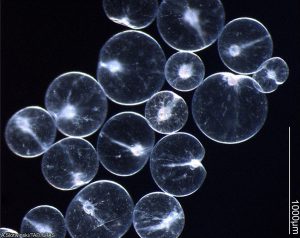 Noctiluca are one of the dinoflagellates that produce bioluminescence.
Photo: University of New Hampshire.

But it does not stop with dinoflagellates.  As you descend into the deep ocean the bioluminescence becomes even more spectacular.  All sorts of creatures from jellyfish to squid, to fish, to even fungus and bacteria illuminate.  Some species of luminescent marine animals do not produce the light themselves but rather harbor luminescent bacteria on the skin or specially designed skim pockets to hold them.  Though blue-green is the dominant color, yellows, oranges, and reds have been produced.  It has been suggested that blue-green is much easier to see in the deep so reds and oranges are less likely.  That said, it is believed that some marine creatures will produce those colors to assist in capturing prey.  They can see the red light, but their prey cannot. 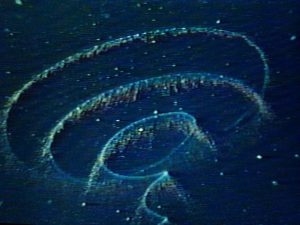 The magical lights of the deep sea.
Photo: NOAA

Either way the illumination of the ocean, like the Christmas illumination of our streets and homes, is beautiful and amazing thing.  As you admire the lights on the neighborhood home, find some short videos of bioluminescence online and enjoy the show.  Happy Holidays everyone.