Frogfish of the Florida Panhandle

Hoese and Moore1 describes members of the frogfish family as “grotesque”.  Well… maybe.  I am not sure I would call them grotesque, but they are sort of gelatinous blobs with reduced or missing scales.  They feel sort of “mushy”.  They have broad shaped fins and a free dorsal spine that serves as a “fishing rod and lure” called the illicium.  Maybe they are a little grotesque…maybe.

Being round with broad fins, this is a very slow swimming fish, if you can call how they move swimming.  So, to survive, they must blend in with the environment to avoid predators and wait for their prey to come within range before pouncing on them.  The illicium lures prey to within range and their “gulp” is like a vacuum cleaner sucking food out of the water.

The family name for the group is Antennariidae, which is appropriate being they have that fishing lure, and is one of the few fish families whose gill opens are behind the pectoral fin.  There are 48 species of frogfish found worldwide and most are tropical and subtropical2.   Hoese and Moore1 indicate there are three species found in the Gulf of Mexico and all three can be found along the Florida panhandle.

The most commonly encountered frogfish in our area is the Sargassum fish (Histro histro).  This small six-inch fish blends in perfectly with the sargassum mats that float in close to shore.  Using its fins to brace itself in the seaweed, this fish uses its illicium to attract a variety of small prey that live in the sargassum community.  As the sargassum mats are blown close to shore the sargassum fish will leave and move to another mat further out.  Finding them on the beach is rare but snorkeling out to a mat just offshore with a small hand net, you might be able to find one by scooping up some sargassum and taking a look. 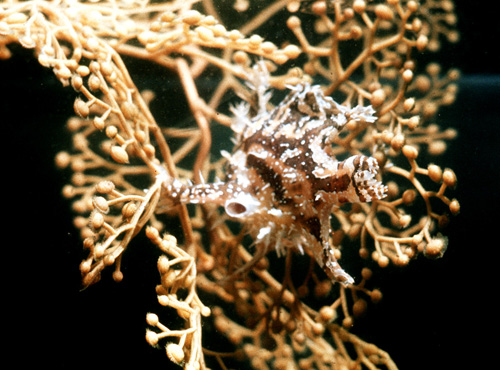 This sargassum fish is well camelflouged within this mat of sargassum weed.
Photo: Florda Museum of Natural History

The Singlespot Frogfish (Antennarius radiosus) is even smaller at three inches and is found on hard habitats of the middle continental shelf offshore, but occasionally is found along the coastline.

The Splitlure Frogfish (Phrynelox scaber) is five inches in length and not as common on our shelf as the singlespot frogfish.  Those that have been found off our coast were further offshore.

The Florida Museum of Natural History includes the Striated Frogfish (Antennarius striatus) as a Gulf species and resident of panhandle waters3.

The distribution of this group is pretty wide throughout the tropical and subtropical waters of the Atlantic Ocean and beyond – suggesting few geographic barriers to dispersal.  The sargassum fish, of course, is restricted where sargassum is found – but sargassum is found in a lot of places.  The singlespot frogfish seems to have a more restricted home range found in Bermuda, the Atlantic coast of Georgia and Florida, and the Gulf of Mexico.  Hoese and Moore does not report this fish in other parts of the Caribbean as the others are1.

They may be grotesque to some, but to others it is an amazing group of fish, much fun in an aquarium, and exciting to find when snorkeling or diving.