Batfish of the Florida Panhandle

This is another one of those fish in this series that is not often seen but when you do see one you will ask “what is that?” – So, we will answer the question by including it here.

Like the frogfish we have already written about, batfish are described by Hoese and Moore1 as “grotesque” and they take it a step further by telling us all “ugly” fish (as they say) are grouped into what many call “dogfish”.  As with the frogfish, I am not sure I would use the term grotesque, but they are strange looking. 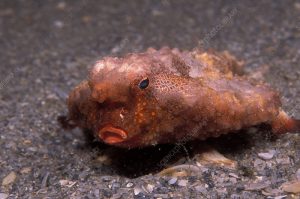 I have only seen a couple in my life.   Hoese and Moore mention they are often brought up in shrimp trawls, and I have seen them while doing trawl surveys at Dauphin Island Sea Lab.  I also found one while snorkeling along a seawall near Gulf Breeze FL.  So, they are out there just not encountered as often, or as well known, or seen as frequently, as many other fish in the Gulf.  Another reason to include this group here.

It is hard to describe what this fish looks like.  They are, as they say, dorso-ventrally flattened – meaning from top to bottom, not side to side – like a stingray.  They have two fins extending from parts of their body that sort of “stick out of the side” and appear to be like webbed feet with which they walk.  Actually, there are these small, modified fins on the ventral side that are used to walk on the bottom – they are bottom dwelling (benthic) fish for sure.  Like their relatives the frogfish they have a modified spine that is used like a fishing lure.  Like the frogfish, the shape of that lure can be used to identify species.  But unlike the frogfish the lure is located between their mouth (which near the bottom of the body and is very small) and a pointed rostrum that extends from the top of their head like a battering ram.  This lure is extended to lure not fish swimming above, as with the frogfish, but small creatures in and on the sand.  Because of this they do not call the lure an illicium but a esca.  These are strange looking fish.

Many species are only described as being from the shelf of the Gulf of Mexico and no other oceans.  Some of them are even more restricted to either the eastern or western Gulf.  This all suggests that batfish do have biogeographic barriers of some sort restricting their dispersal.  Being offshore benthic fish, your first guess would be substrate.  Usually in those locations the temperature and salinities are pretty similar but the material on the bottom (rock, shell, sand, canyons, etc.) are not.  However, several articles mention that batfish can be found over rocky or sandy bottom2,3,4 and the polka-dot batfish can be found in grassbeds as well2.  So, I am not sure what the possible barrier is, but several do have a limited range.  The east-west split could very well be the DeSoto Canyon off the coast of Pensacola.

All of that said, it is a very interesting group of fish that for one species you might encounter while out and about snorkeling or diving in the Florida panhandle.