Over the years I have received many calls from beach residents with concerns about coyotes.  Encounters with this animal can be unnerving for many and the most common time of year for them is winter. 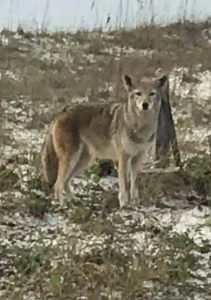 A friend of mine who lives in the central part of Escambia County, told me he had seen several coyotes over Christmas break and several more along I-10 while driving back and forth from Mobile Alabama.  Winter is breeding time for these animals.  Early in the breeding season males are on the move seeking mates.  Their searching may lead them to move at all times of the day and not just the dawn/dusk and evening times they typically do.  Hence, more encounters.

Once pregnant, the females will find a den to give birth and care for the young.  Dens are usually burrow areas, under logs, or within thick vegetation, but sometimes they have been found under decks or other debris in the yard.  Gestation is about two months, and a litter is typically about six pups.  Once born, the female will need to feed her young and will seek food from a lot of places and during all parts of the day.  Hence, more encounters.

Coyotes are omnivores and have a wide diet.  During the cold months their natural prey would be rodents and birds, but garbage and left out pet food are much easier to grab than birds and mammals, has a stronger smell, and higher caloric intake.  It is more desired.  Encounters with pet food can led to encounter with pets, and this could end bad for the pet.  It is recommended that during these colder months you feed your pets, and store their food, indoors.  Keeping your small pets indoors at night is recommended as well.  Close and secure your garbage as best you can.  Coyotes are pretty intelligent and will make an attempt to access this garbage if given the opportunity.  Note that intentionally feeding a coyote is illegal.  They have a natural fear of humans and if they are being fed, they will lose this fear which could lead to negative encounters with the animal. 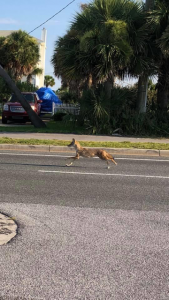 A coyote is seen racing down Via DeLuna Blvd on Pensacola Beach
Photo: Shelley Johnson

Some may be concerned about the “pack behavior” of coyotes.  Most are solitary but small packs of about six animals are known to move about the landscape usually calling to each other near dawn and dusk with their iconic howls and yips.  The typical range for a group of six is about 10 square miles, which would lead to the argument that there are not many resident coyotes on Pensacola Beach or Perdido Key, but we know they are there.  Some coyotes have been seen crossing the Bob Sikes Bridge between Pensacola Beach and Gulf Breeze near dawn, suggesting coyotes residing in Gulf Breeze may be using resources on Pensacola Beach.

If an encounter does happen, you should hold your ground.  Coyotes do have a natural fear of humans and will typically flee.  I recently encountered three animals napping near a large fallen tree while hiking in Colorado.  I was not 100% sure what they were when I first saw what appeared to be ears sticking above the tree.  Then a head popped up to look at me.  I slowly approached, not recommended, and the coyotes immediately got up and ran.  This is what you would expect them to do.  Coyotes standing their ground and not leaving could suggest and animal who has found a reliable food source and may be willing to defend it.  Contact the authorities if you believe this is the case. 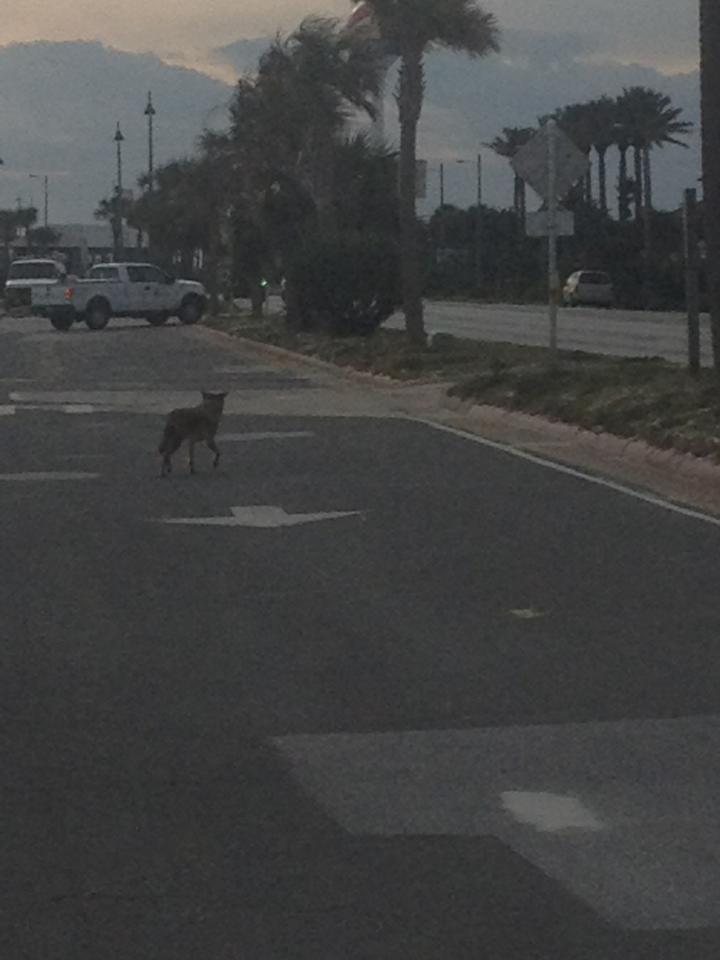 We do not know how many coyotes live in Escambia and Santa Rosa Counties, but it is fair to say they are common.  Encounters are rare and the animal has learned to live near us without provoking problems.  All the same, being aware of pets, pet food, and garbage this time of year is a good practice.