Needlefish of the Florida Panhandle

I remember first seeing a needlefish as a young boy on Pensacola Beach.  We were either playing or snorkeling in Santa Rosa Sound and one of these long, sleek, “barracuda” looking fish swam by cruising the surface of the water.  Your first reaction is danger.  They have long jaws with very sharp teeth and move very “predator-like” through the water.  Your fear is that if you get too close, they will turn and attack.  I remember following them for several minutes watching how they looked at me but continued to search for prey.  I was never attacked.

Years later, as a marine science teacher, we were conducting a diversity and abundance study of nearshore fishes of the Pensacola Bay area.  We would often catch these in our seine nets, and they would often get their numerous teeth snagged in the net.  It took a careful maneuvering to remove them but in doing so, we could see their “nasty” side.  They would try to bite, and bitten I was a few times.  The needle like teeth did hurt a little and always drew blood.  But once released they never turned on us, nor did the needlefish that were in the net and not snagged.  We simply just released them.

I have often been asked by students “what do they eat?”.  I have never read about, nor conducted a study, on their diet but would guess they prey on small fishes.  Needlefish themselves are not terribly large, two feet being reported as the average length, so their prey could not be very large.  Their long skinny snout and relatively small mouth with the lack of molars would suggest they must grab and swallow, almost whole, whatever lunch would be for that day.  Fish that are only a few inches long at most.  I have heard silversides, and killifish are popular targets for them, I can see this.  I have seen them hunt in small groups, but mainly I see them alone.  They themselves would be prey for larger predatory fishes in the bay area and birds, such as osprey, would hunt them due to their habitat of hunting at, or near, the surface. 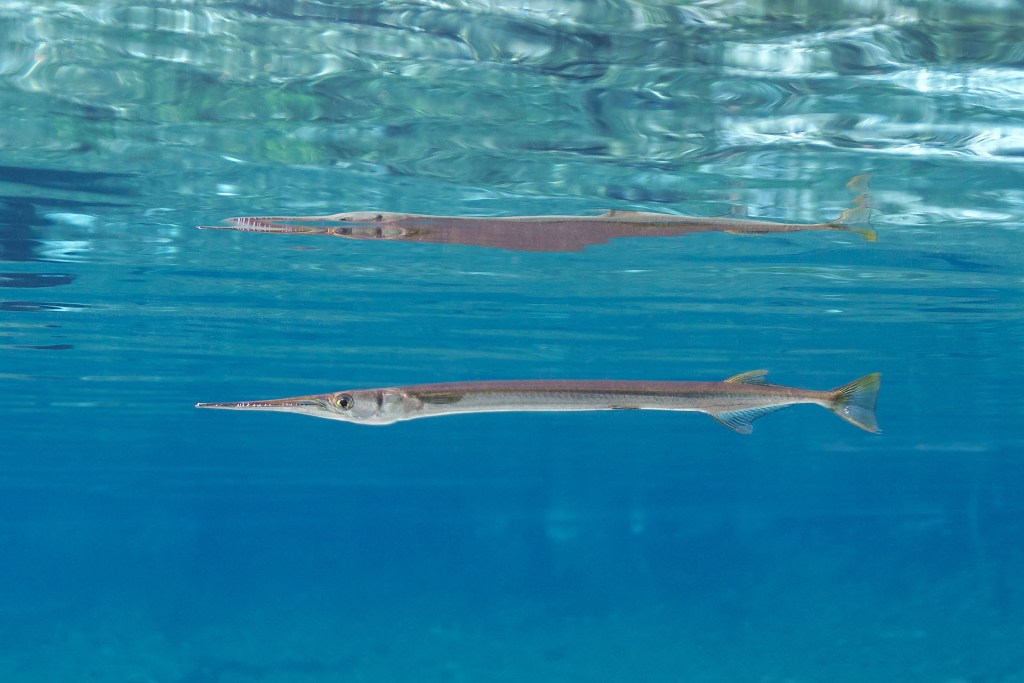 Swimming near the surface is a common place to find needlefish.
Photo: Florida Springs Institute

Though Hoese and Moore1 report four species in our area, it is the Atlantic Needlefish (Strongylura marina) that I caught most often.  Honestly, it is very hard to tell the species apart just by looking at them.  One, the Keeltail Needlefish (Platybelone argalus) lacks gill rakers, if you know what those are, and this cannot be determined unless you catch the fish and take a peek.  That said, I did capture these while conducting that fish diversity study with my marine science class.  Like the Atlantic Needlefish, the Flat Needlefish (Ablennes hians) and the Houndfish (Tylosurus crocodilus) – you have to love that name “crocodilus” – have gill rakers and are differentiated by the number of rays on their anal fins.  Another feature not easily noticed while snorkeling with them.  I have heard the Houndfish can be aggressive.  Hoese and Moore report they are more common offshore.  We did capture one in Pensacola Bay and did not notice a “nastier” attitude.

All four species have a wide geographic range; found along the Atlantic coast, throughout the Gulf of Mexico and the Caribbean, south to Brazil.

They are a common and interesting fish to see, and not dangerous as they may appear.