Wildlife on the Beach in January

During 2022 I plan to make weekly hikes on Pensacola Beach to see what sort of wildlife, or other natural phenomena, I encounter each month.  For the first January trip I did a short hike at Ft. Pickens on the west end of Santa Rosa Island.

Ft. Pickens is more wooded than much of the island and provides both maritime forest and beach habitats for a variety of wildlife.  On my first trip – Jan 6 – the temperature was 62°F and overcast.  It actually rained some during the hike.  As I approached the fort area, I saw a bald eagle sitting on a sand dune. 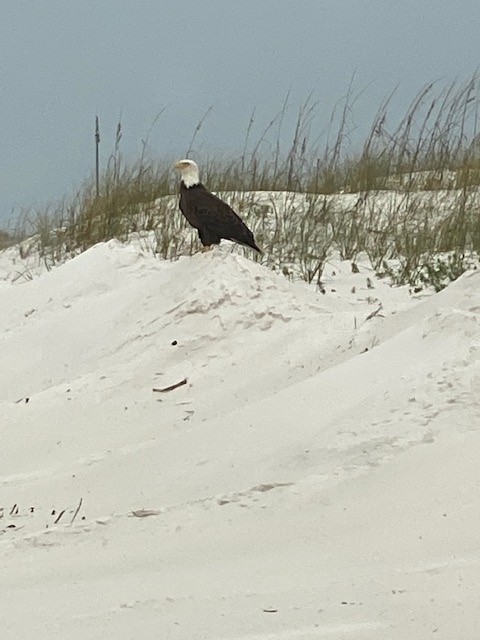 A bald eagle sitting on a dune near Pensacola Beach.
Photo: Rick O’Connor

Everyone gets excited about seeing a bald eagle.  Its like dolphins, no matter how many times you see them, it is still cool, and you alert everyone they are there.  The difference with bald eagles is that they were not always here.  Growing up in Pensacola I rarely saw one.  I worked for a period of time on what were called “the ponds” on the property of Air Products in Pace, Florida.  The ponds were a water treatment system to help improve water quality coming from the plant being discharged into Escambia Bay.  It was a wildlife sanctuary and there was plenty of wildlife there.  Cottonmouths, deer, turtles, raccoons, and alligators were all common.  One of the largest eastern diamondback rattlesnakes I have ever seen was found there.  And, during the winter months, we would occasionally get a bald eagle.  It was rare and very exciting.

A field guide of Birds of the Eastern United States published by Roger Tory Peterson in 1980 indicates that their winter breeding range includes much of Florida.  A document published by the U.S. Fish and Wildlife suggest they begin building nests in our area in September, lay eggs by October, and hatching occurs in November.  Between November and March, the parents take care of them until the fledge and head out on their own.  The reason we have not seen more in our younger years was their population was down.  The decline of the national bird was due to a variety of reasons, but the DDT story played a role.

Today their numbers have rebounded and encounters with them in our area have increased.  Their nest can be quite large and are usually close to a water source.  These birds are known as predators but actually spend a lot of time feeding on carrion and robbing other birds of their food source.  Competition between the osprey, another recovering species, and bald eagles are quite famous.  And, like I said, you never get tired of seeing them.  This time of year, you can spot them in several locations around the beach areas.

Other creatures found on this January hike at Ft. Pickens included: 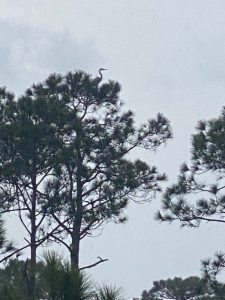 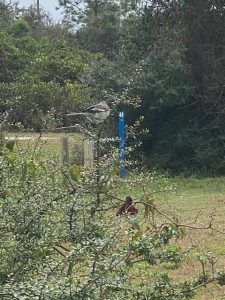 Mockingbirds are quite common in the winter. This one was feeding on the red berries of a yaupon holly.
Photo: Rick O’Connor 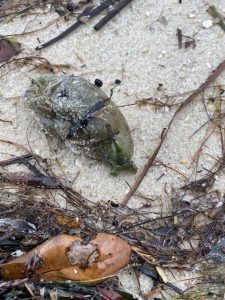 This green blob is actually a sea slug known as a sea hare. It was returned to the water.
Photo: Rick O’Connor 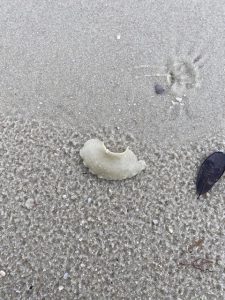 This structure is often found on panhandle beaches. It is the egg case of the snail known as the moon snail. Also called the “shark’s eye” or “cat’s eye”.
Photo: Rick O’Connor 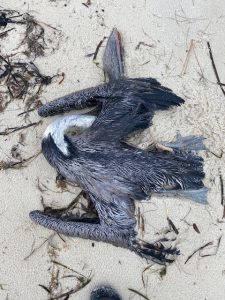 Unfortunately dead seabirds on the beach are not uncommon. This one is a pelican.
Photo: Rick O’Connor

I encourage to take some time this winter and go for a hike and see what you can discover.