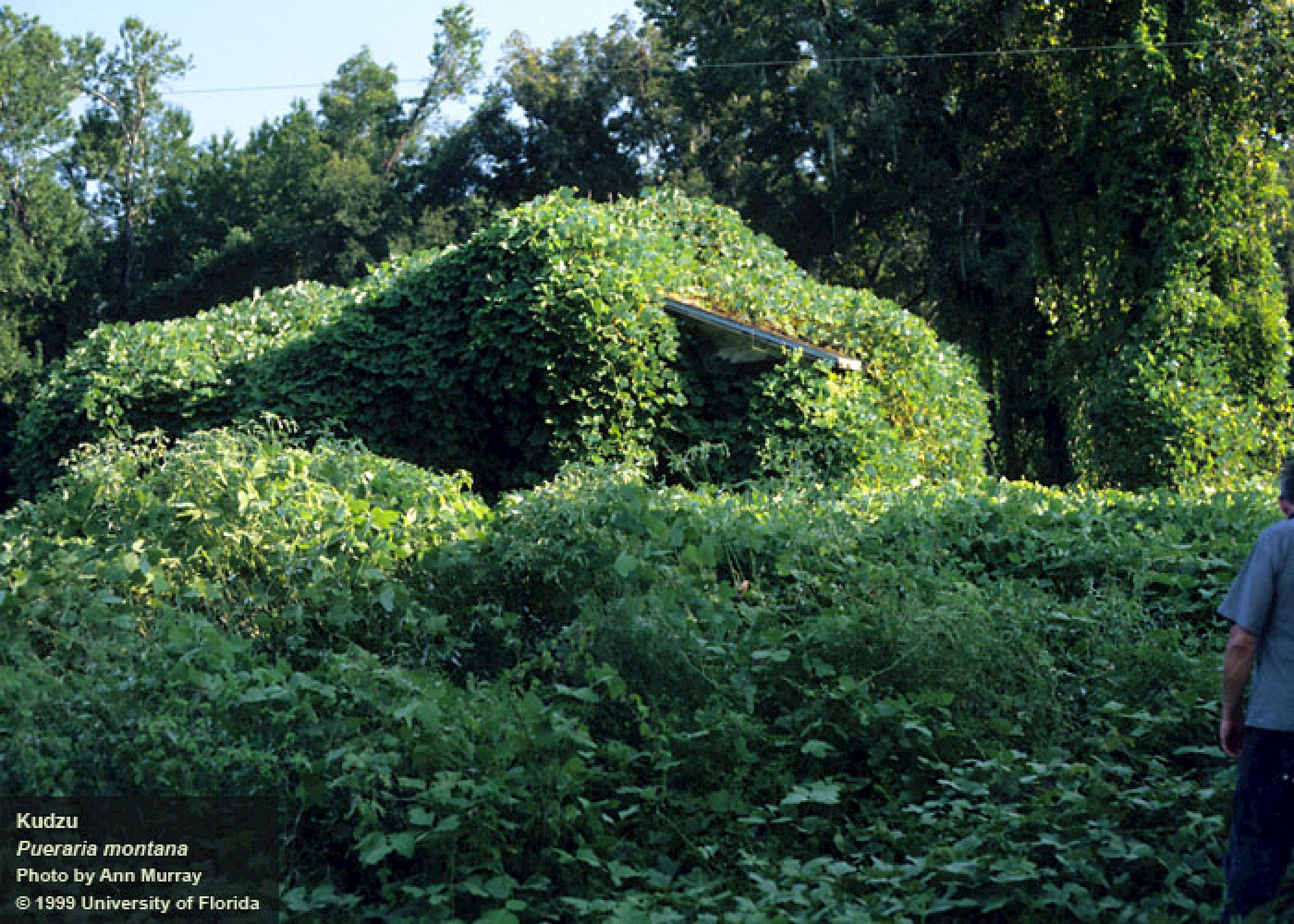 Kudzu is an aggressive growing vine found throughout the southeast.
Photo: UF IFAS Center for Aquatic and Invasive Plants.

Kudzu was first brought to the U.S. for the Philadelphia Centennial Exhibition in 1876.  Seven years later it was presented at the New Orleans Exhibition.  Seed was sold to grow ornamental vines to shade porches and was also tried as livestock feed.  It now covers about 2 million acres of forest land in the southern U.S.

EDDMapS currently list 11,288 records of the plant in the U.S. As with many “dirty dozen” species, this is certainly under reported.  Most are in the southeastern U.S. but there are records in Kansas, Illinois, and Oregon.  It has been reported throughout the state of Florida including the Florida panhandle, and all of the Six Rivers CISMA.

This is a semi-woody vine that can grow up to 100 feet.  Most who have seen it, recognize it immediately.  The leaves are large (4”) and alternate on the vine forming three leaflets at each node.  The leaves are lobed with hairy margins.  The vines can reach 4” in diameter and one stump found in Georgia was 12” in diameter.  The flowers are purple in color, hang in clusters, and appear in late summer.

It grows almost anywhere and over almost anything.  Entire buildings have been completely covered by this plant and it has also been known to grow over and uproot trees.  Any vegetation it covers will soon die due to a lack of sunlight and it is also known to harbor insects and disease for native legumes, many of which are important agricultural crops, such as soybeans.  It is listed as a state noxious weed.

This is a tough plant to control.  It has been reported to grow as much as a foot a day.  The root and rhizomes system are extensive and reach depths of 10 feet.  There are also tubers that store excess carbohydrates that help with surviving drought, freezing, and even fires.

Herbicides are effective on small patches, though repeated applications may be needed.  They can be used on large areas of infestation but will certainly take repeated applications over years and can be very expensive.  Many will include burning, disking, or mowing before chemical applications to weaken the root system.  Chemicals that have had some success include glyphosate, chlopyraild, metsulfuron, and aminopyralid.

Many have had success using livestock grazing, such as goats or cattle.  Research has shown that close grazing, where 80% of more of the plant is removed, can completely eradicate it over a couple of years.  One source recommends eight goats / acre for best results.  Others have had some success by cutting the plant back (like grazing) during the hottest times of the year.

No biological controls have been approved yet, but research continues.

In Asia the plant is used in a variety of ways including food, fiber, and medicine.  These could be options for management as well.