A Cold Winter’s Snake – the Garter

When hiking around the Florida panhandle in midwinter, most snakes are undercover trying to avoid the chilly cold fronts that pass through and can drop temperatures close to freezing.  So, the probability of seeing one is low.  But one species, the eastern garter snake, seems to tolerate cold temperatures better.  They are often found basking on open areas this time of year and are quite common not only on the trails, but in our home landscapes as well.

But not to fear…

This is one of the 40 non-venomous snakes found in our state.  Many are afraid of these animals because… well… because they are snakes, and that is all that need to be said – at least for some.  But for others, they understand the benefits snakes provide to the ecosystem (controlling unwanted pests) and to see one is kind of exciting.  Being non-venomous does not mean they will not bite, they certainly will, but no venom is associated with it.  Larger non-venomous snake bites can be painful, but not deadly.  Garter snake bites barely hurt. 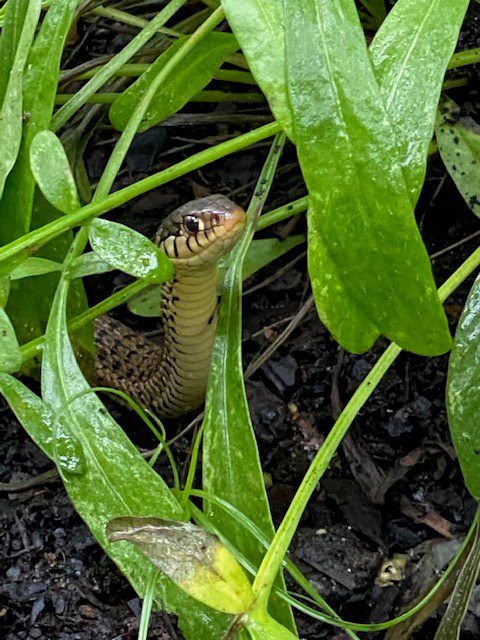 The eastern garter snake is one of the few who are active during the cold months.
Photo: Molly O’Connor

Recently my wife and I were on a hike with our grandsons in central Escambia County.  At one point my oldest grandson said “snake”.  I am not sure how he saw it actually.  It was a young eastern garter snake basking in the middle of the trail.  These snakes have colorful patterns of stripes and squares that help them blend in well.  We knew right away what it was and were all excited to see it.  Knowing it was harmless we allowed him to pick it up but warned him that it would most likely bite.  Garter snakes tend to flee when first alarmed but will turn and bite if cornered.  They will sometimes rattle their tails in the leaves giving off a “buzzing” sound and can release a musk to warn the predator.  But this young snake did neither, no rattling, no musk.  However, it did try to bite him.  After a few photos and the amazement of seeing one, we released it in a sunny spot to continue its midday basking.  It was pretty cool.

Many reading this have seen many garter snakes and know this as a harmless animal.  They are found all across the state of Florida and much of the eastern United States.  There is a subspecies, the blue-striped garter snake, that can be found in the Big Bend area of Florida, but the differences are minor.

Eastern garter snakes are smaller snakes, usually reaching two feet but there is a four-footer on record.  They like to inhabit areas that are near water where their favorite prey (amphibians) can be found.  Preferring open grassy areas, they can be found in wooded habitats and are often found in lawns and gardens of local neighborhoods.

They hunt primarily during the daylight hours for amphibians but will also eat fish and earthworms.  Some have been found to feed on snails, slugs, and even small snakes, birds, and mammals.  They are not constrictors but rather grab their prey and swallow it whole.

They are famous for their large gatherings during breeding season.  In spring, females will release a pheromone to attract the males, and the males will come, many of them at one time.  There are locations in Canada where literally thousands gather at one location.  The females do not lay eggs but rather give birth to about 20-30 live young in late summer or fall, it could be up to 100 in a litter.  These large groups of slithering garters bring back images from movies where “snake pits” and “a den of snakes” are portrayed.  I have never seen such a gathering, and in the southeast, they do not happen in such large numbers as these, but it would be cool.

This time of year, on sunny days in open basking areas, you may see this small but neat snake.  The same could be true if hiking near an open sunny location.  So, keep your eyes down and maybe you will get lucky.