National Invasive Species Awareness Week (NISAW) – How Did They Get Here?

Based on the definition we use for an invasive species, they got here because of us.  It may have been unintentional, but it was still humans who assisted their arrival. 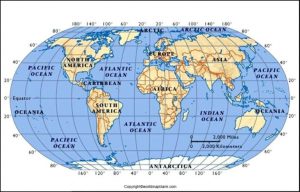 Each species has a biogeographic range.

All species have a biogeographic range.  There is some point of origin, where they first appeared, and then a dispersal process as their populations moves across the landscape.  Dispersal is driven by competition, usually with your own species, but can be with others as well.  If there is no longer food or space for the number in the population, they move to new territory – dispersal.  This dispersal continues until they encounter some sort of barrier, something that stops dispersal.  Barriers can be physical, like a river or mountain range.  They can be biological, like the lack of their needed food or the presence of a new predator that you have no defense against.  They can be climatic; it is now too cold or too hot.  Whatever it is, it stops dispersal, and the species now has its geographic range. 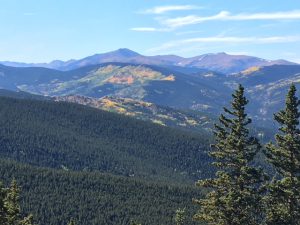 Mountains and rivers can be barriers to species dispersal.

Kangaroos and wallabies are isolated on an island we call Australia.  Australia is very large, and the physical features and climate vary so, kangaroos are not found over the entire continent.  Many of the plant and animal species that originated in Asia would have a difficult time reaching North America.  Many birds have few physical barriers because they can fly over most of them.  But their dispersal can still be impeded by biological or climatic barriers.  Species that have very large ranges are called cosmopolitan, like seagulls.  Species with small ranges are referred to as endemic species, like the marine iguana of the Galapagos.

Islands can be difficult for many species to reach.

For invasive species then, we are talking about those that would have a very difficult, if not impossible time, reaching Florida – but did so because we brought them here, we got them past their natural barriers.

In many cases this is intentional.  In the early history of Key West, it was the home of many sea captains who often brought exotic plants from around the world to plant in their yards.  Banyan trees for example, are not native to Florida, but are found in Key West.  Orange trees were introduced by us, as were thousands of ornamental plants for landscaping, and sugar cane for agriculture.  Most of these would not have found their way to our shores without us. 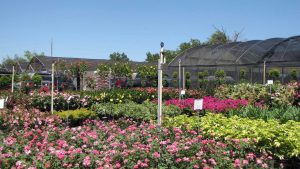 And there were many animals that reach Florida because we intentionally brought them.  Horses, pigs, cattle to name a few.  There are of course exotic pets like boas, monitor lizards, and tropical fish.  There are reports of some coyotes being introduced for the purpose of hunting, though we know that coyotes dispersed into Florida naturally as well.

And then there are those that reached us due to hitchhiking.  We load cargo on ships, trucks, and planes from all over the world and deliver them to new destinations like Florida.  As a matter of fact, Florida and Hawaii are two states with large invasive problems because of the amount of international traffic (planes and ships) and a subtropical climate that is suitable to many of them. 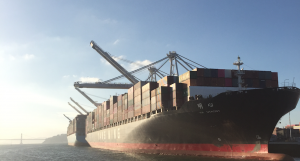 Nonnative species can be transported on ships and in their ballast.

Most of the Polynesian islands are very isolated and difficult for species to reach.  During World War II the brown tree snake was accidentally dispersed by the U.S. Navy as they battled their way across the islands trying to reach Japan.  On the island of Guam there are reported 20,000 snakes for each human on the island and no predators to control them.  Hawaii is so concerned about this issue that all aircraft coming from that part of the world are isolated on a runway at the airport until a thorough check can be conducted, often using dogs.  When I traveled there years ago, we had to complete a form asking if we were bringing any plants?  Was their soil with the plants?  If you had dogs, they had to be quarantined because there were no ticks on the island.  And, like Guam, there are no native snakes on the island as well.  I heard one story where a local on the Oahu decided to raise piranha, I suppose as a deterrent.  The fish were confiscated, and the project destroyed.

Firewood is now something biologist are concerned about.  There has been an issue in many forest with insects that either eat the trees directly or make them weak and susceptible to diseases.  Many campers like to gather firewood for camp and will take logs with them to their next camp in the next state, not knowing they are spreading the problem. 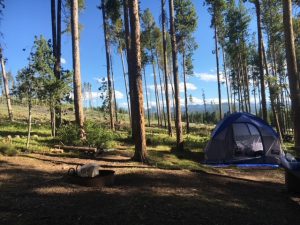 Campers can move species by carrying firewood with them to each new site.

Boating has been known to spread invasive plants.  Launching and recovering your boat, the trailer may grab some plant, you move to the next lake an – wah-lah.  This has become such a big issue out west that many lakes have check in stations where officers check your boat and trailer as you arrive AND when you leave – a point made in the last article, we are spending a lot of money on battling invasive species.

The Great Lakes area has a large problem with invasive species that are transported more by shipping.  There are several major ports in this region.  Ships carrying cargo have weight to make them stable when in rough seas.  However, when they empty that cargo at port, they become light and the trip back could be a bit precarious.  To offset the weight loss, they will add ballast.  In the colonial period, this would have been stones from the surrounding area.  The ships would unload the cargo, load the ballast, sail to their next destination, unload the blast (you have now moved this and whatever it was carrying), and get a new load of cargo – and so, it goes.  Today ships use water as ballast.  As a ship enters a port in the Great Lakes, they may discharge their ballast tanks of water they took on in another part of the world.  Sometimes releasing things like zebra mussels.

Florida of course is no different than any of these other stories.  International travel lands at our airports and cruise ship ports everyday bringing who knows what.  Campers come from around the country harboring a variety of unknown hitchhikers.  And then there are the intentional exotic plants and animals shipped in for the pet and landscaping industries.

The problem we have is that some have “escaped” – coral ardisia, Brazilian pepper, Burmese pythons, have been found to be a problem and knowing which will be problems and which will not is tough.  You really won’t know until they have spread, and the issue arises.

For us Miami is “ground zero” for such problems.  It is a tropical international hub.  There are numerous invasive species that entered our state here and have spread across central and south Florida.  North Florida has fewer due to our climate, but we are finding (a) many species can tolerate our climate and are doing well – cogongrass, Chinese tallow, Chinese privet – and (b) our climate is warming allowing species that were once not a threat, to become one.

I’ll finish on a story from college.  I was attending the University of Southern Mississippi.  My roommate was from Afton, Wyoming.  Unknown to him, he carried cockroaches’ home in his luggage one semester.  This is an animal not found in the Rockies, it now lived in his house.  It is very easy for us to carry hitchhikers across wildlife barriers.  We will discuss how to prevent this in a later article, but up next will be an article discussing some of the new species that may threaten the Florida panhandle.