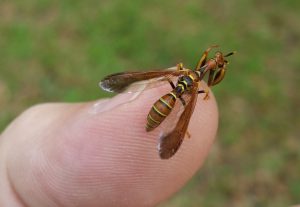 When it landed on my hand, the first reaction was to brush it off as quickly as possible. However, something seemed to be slightly odd about this particular “wasp” that made me take another look. First, it was not prone to fly away as I moved my hand up for a better look. It even seemed okay with the interaction as I moved it around for a photo opportunity. There was also something odd about the shape of its body that wasn’t exactly wasp-like. As I looked closer, I realized that its head was very mantis-like and when it began grooming its antennae, I could make out the telltale folded arms that give the praying mantis its name. The yellow and black stripes encircling its abdomen, along with its wing shape and positioning veritably shouted “WASP!” I had never heard of a praying mantis that expertly mimicked a wasp so I did a quick internet search and found that this was a wasp mantidfly (neither a wasp nor a mantis). Mantidflies are grouped by scientists into a separate order called Neuroptera, which includes lacewings, antlions, owlflies, and others. Here are a few other mantidflies that mimic other wasp species.

A simple definition of mimicry would be: similarities between different species of animals.  It is different from camouflage, which refers to an animal resembling an inanimate object, but both are effective forms of deception that generally benefit an animal in some way. Another common insect that would fool most people is the soldier fly. It definitely looks like something that could sting but closer examination will reveal only one pair of wings (a fly trait) rather than two, as bees and wasps have.

Now, not to take you too far into the weeds on this subject, but we should also mention the different types of mimicry that scientists have identified in nature and note an example of each. Henry Walter Bates studied butterflies in the Amazon and described a type of mimicry where one species mimicked the look of another that had some particularly nasty defense to predation. The mimic was lacking the defense mechanism but benefited by predators avoiding it based on its basic appearance. This type of mimicry is now known as Batesian mimicry and a good example are the butterflies that mimic the monarch. Monarchs are toxic because of the milkweed they eat during their larval stage. After a predator eats a few it learns to avoid anything that looks similar, such as a viceroy or queen butterfly. Fritz Mueller was a German zoologist who described a form of mimicry, now called Muellerian mimicry, where multiple species mimic each other and they all have a similar defense mechanism. This spreads the benefit to all that look similar by reducing predation pressure on all.  The third type of mimicry is known as self mimicry, where an animal has one body part that mimics another (i.e. large eye spots to frighten or disorient an attacker), or a body part that may mimic some innocuous thing to fool prey into coming closer. We have a great example of this locally in the alligator snapping turtle. The tip of their tongue has a lure that resembles a worm and is capable of wiggling to enhance its effectiveness in tempting a fish to its doom in the vice-like jaws of the turtle.

Nature never ceases to amaze with the diversity and complexity of adaptations that various animals exhibit to gain an edge on the competition. When it comes to mimicry in the natural world, first impressions are generally wrong. I mean, that’s the point, right?