One of the natural phenomena I’ve loved watching this rainy summer is the dramatic “life and death” cycle of the resurrection fern (Pleopeltis polypodioides). Found most often along the branches and trunks of stately mature live oaks, this plant turns from a dry, crackly brown to a vibrant green in the span of a day. 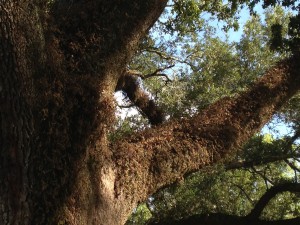 Like Spanish moss this epiphyte, or “air plant”, uses a host plant (live oak, pecan, or sabal palm) as its growing surface. Yet the fern does not damage the tree.  Its root system is composed of long, winding rhizomes that tuck into the nooks and crannies of the tree’s bark, collecting rainwater and nutrients from airborne dust and nutrients leaching from the trees themselves.

The fern’s unusual response to dry weather is an adaptation that allows the fronds to curl inward, reducing water loss by decreasing surface area exposed to the elements.

Blades of turf-grass will respond similarly to drought, folding in half after several days with no water.  However, the resurrection fern takes drought tolerance to a whole new level,  capable of losing up to 97% of its water content without dying. As a comparison, most plants will start to die back at a 10% water loss. Several researchers estimate the fern can live 100 years in its dry state.  However, true to its name, the resurrection fern will spring back to life after a rain or an increase in humidity.

The fern that was completely dry one day will turn a vibrant green just after a rainfall. Photo credit: Carrie Stevenson

The resurrection fern has earned its place in history for several other reasons.  According to literature from early pioneers and indigenous people, members of the Florida Seminole and Miccosukee tribes used the fern in baths to treat insanity.  They also made a root mixture of the resurrection fern and Shoestring fern (Vittaria lineata) to treat chronic health conditions and sick babies.

Because of its unique attributes, resurrection ferns were taken in space along with the shuttle Discovery in 1997 as part of a mission to better understand natural phenomena from the perspective of space. 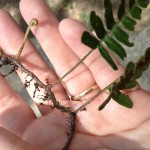 The thin, elongated rhizomes of the resurrection fern root into the crevices of a live oak’s bark. Photo credit: Carrie Stevenson

The plant is native to the eastern United States west to Texas and throughout the American tropics. A variety of the species is also native to southern Africa. It can be propagated by cutting several inches of the rhizomes and placing them into crevices of another tree, log, or rocky area.  Dry fronds will respond to being sprayed with water in under an hour, so it’s also a fun experiment to show kids!

For more on resurrection ferns, check out the UF School of Forest Resources.