Spring 2018 is barely out of the starting gate. All kinds of plants are sprouting and producing blooms! This week’s last gasp of winter temperatures slowed the progress, but only slightly.

Much like the Easter egg hunts a few weeks ago, a search of the landscape can bring multiple surprises. Two colorful plants, spiderwort and rustweed, which are growing in the region fit into this category.

Tradescantia ohiensis, the scientific name for spiderwort, is a herbaceous native plant. Its most striking feature which makes it easily identifiable is the cluster of bright purplish-blue blooms which are currently on display.

To the casual listener, the name spiderwort implies an arachnid with a complexion issue. Far from it, but the terminology is shrouded in agriculture and horticulture history.

The term wort, in its various forms, can be traced back to northern Europe to well over 1,000 years ago. Its meaning related at first to herbs, and then to plants without bark or hard stems.

It should not be confused with wart, a skin eruption relating to a virus. Contact with any part of the spiderwort does not infect a person with warts.

The spider part of the name relates to the flower peddles. In harsh sunlight of the afternoon, the Spiderwort’s peddles are reduced to fine threads similar to a spider’s web.

Spiderworts are often seen along fencerows, in pastures and untended fields, and it forested areas. They bloom from late spring to early summer and usually grow in clumps or bunches of plants.

The plant clumps are easily separated and transplanted. Spiderwort has been used in ornamental horticulture as a showy, low-cost alternative for many years.

They expand their presence in the wild slowly, but persistently. Since there are no herbicides labeled for their control, they are considered a pest species by some hay producers.

Another plant with a colorful name, and which is considered a pest, is the rustweed (Polypremum procumbens). While it does not literally rust, it gets its name from its rust colored foliage in the autumn.

In spring and summer this low growing perennial is a Kelly green fitting for St. Patrick’s Day, and easily blends with Bermudagrass and other turfs as they make their season emergence. Tiny white blooms soon to come will confirm it presence, but this is often overlooked when in landscapes and lawns.

This plant spreads by seed, which are small and heart-shaped. One means of colonizing new areas is by seed lodging in mowing and other equipment, then depositing in new areas when the equipment is relocated.

As with all grasses in the Florida panhandle, rustweed is found only in sunny areas. This little known plant is an area native, but also occurs as far away as South America. 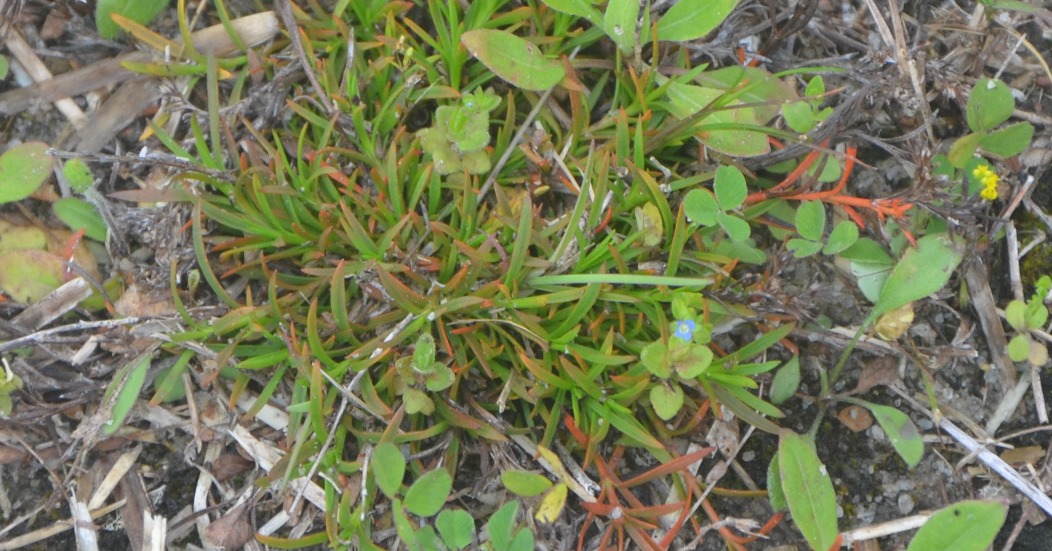 Rustweed, among others, in a Florida lawn. Image Credit Les Harrison

This aggressive native will quickly establish itself and push out other more desirable species. Mowing will not slow its progress.

After the multiple frost and muted earth tones, both spiderwort and rustweed are currently adding variation to the landscape’s hues as the weather warms.