Looks, as the old saying goes, can be deceiving. It is a cautionary pronouncement from experience, usually painful and expensive, to serve as a warning to those who follow and hopefully avoid similar complications if they listen.

In most situations a threat in nature can be easily identified and avoided with a little effort. Except for those situations where the careless or clueless individual blunders into problems, a little observation and logic dictates the potential outcome from a close encounter.

Yellow jackets have stingers, so they must stink something. Alligators would not have all those large and pointed teeth unless they needed to bite something.

Those assumptions are easily deduced by anyone who uses even the slightest quantity of judgement and forethought. Unfortunately, there are occasions where the potential agony is disguised by bright colors and a benevolent appearance.

Such is the case with the caterpillar of the Io moth. Automeris io, this insects entomological name, is a large native moth.

This insects’ range extends from south central and maritime Canada to the eastern half of the U.S. It is found in every Florida County, even into the Keys.

The wingspan of this moth can reach an impressive three and a half inches. Males of this species tend to have a slightly brighter appearance than the females.

Both sexes have large eye spot on each hindwing as a defense device. When revealed, the spots appear as the eyes of predatory creature meant to bluff other aggressors into retreating.

Adults of this species live only a week or two, so reproduction is a priority activity.  Luckily, at least for the parents, there are plenty of host plants in north Florida.

Oaks, sweetgums, redbuds, and ash are among the choice meal sites for the developing caterpillars. The eggs are commonly laid in clusters of 20 or more and the caterpillars go through five development stages before reaching adulthood.

Unlike the parents which are active almost exclusively at night, the larvae spend their days hidden in the tree leaves they are consuming. These caterpillars are quite animated and active, frequently seen moving inline from one feeding site to another.

Initially orange, they change to a lime green as they mature. They also develop clusters of spine strategically place across their plump bodies. 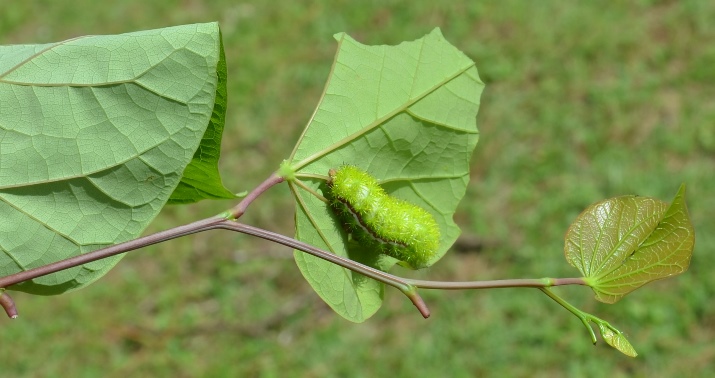 Photo Caption: The colorful Io moth caterpillar is covered by fragile spines. Each contains a painful venom for anyone who physically contact this insect larvae.

Distinct from their parents’ eyespot bluff, the spines are a serious defense designed to assure the caterpillars reach maturity unmolested by birds or other predators which would otherwise find them a suitable snack option.

Unlike a pit viper which injects venom via a syringe-like fang or a stingray which retains its barb in a venom saturated sheath, this caterpillar’s spines work differently. Each spine contains a sac filled with the defensive solution.

When contact is made with the hollow spines, deliberately or accidentally, the fragile structure breaks and releases the toxin.  The pain is almost instantaneous, intense, and can be a serious health treat for those who have an allergic reaction.

Not usually seen on the ground this caterpillar can be encountered on lower limbs, to the detriment of the unlucky individual. The colorful, toy-like appearance hides a very different reality.